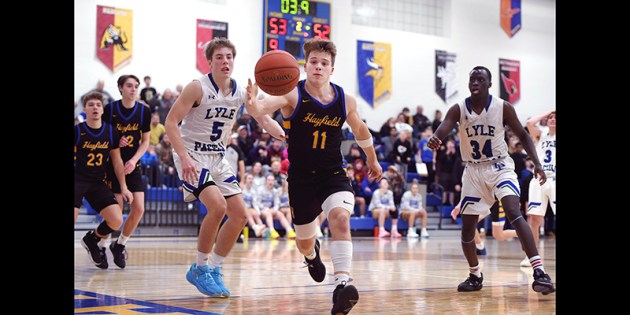 Hayfield’s Isaac Matti reaches for a rebound during the final seconds as the Vikings were able to hold off Lyle-Pacell Thursday night in Hayfield. Eric Johnson/photodesk@austindailyherald.com 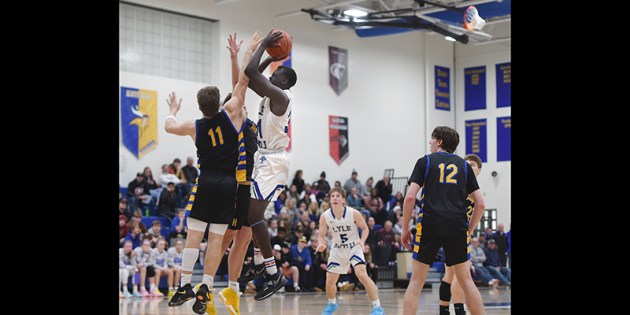 Lyle-Pacelli’s Buay Koak puts upa a jumper under pressure during the second half against Hayfield Thursday night in Hayfield. Eric Johnson/photodesk@austindailyherald.com 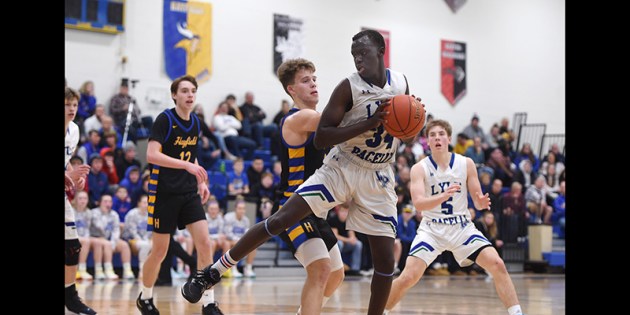 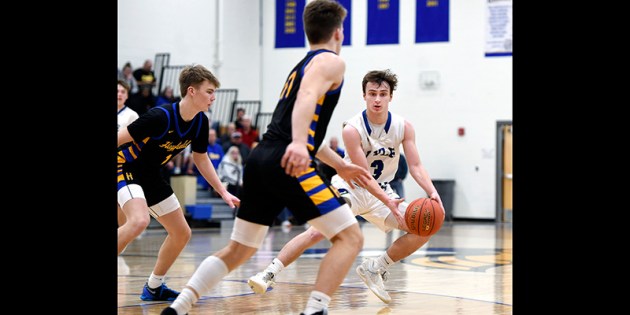 Lyle-Pacelli’s Trey Anderson worsk the top of the key during the second half against Hayfield Thursday night in Hayfield. Eric Johnson/photodeks@austindailyherald.com 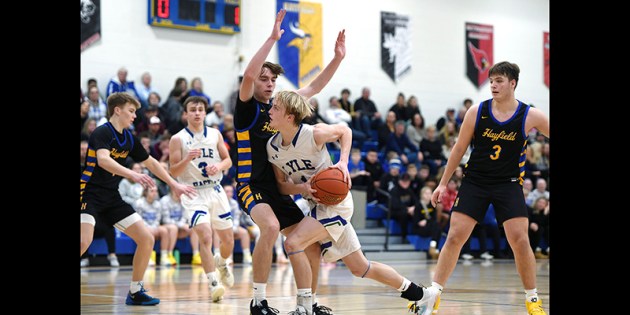 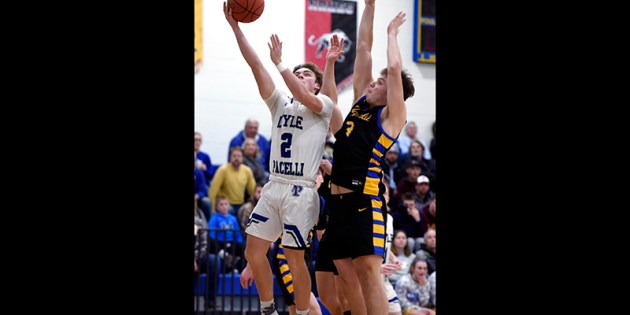 Lyle-Pacelli’s Jake Truckenmiller goes in for a lay-up against Hayfield’s Zander Jacobson during the second half Thursday night in Hayfield. Eric Johnson/photodesk@austindailyherald.com 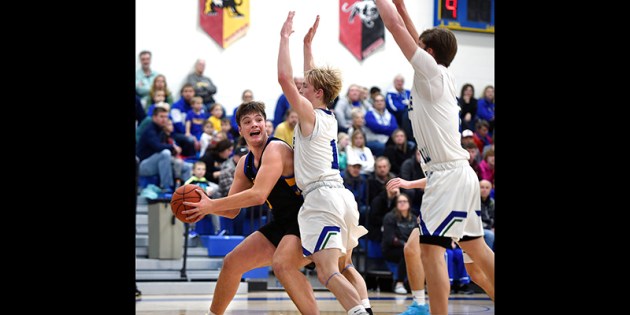 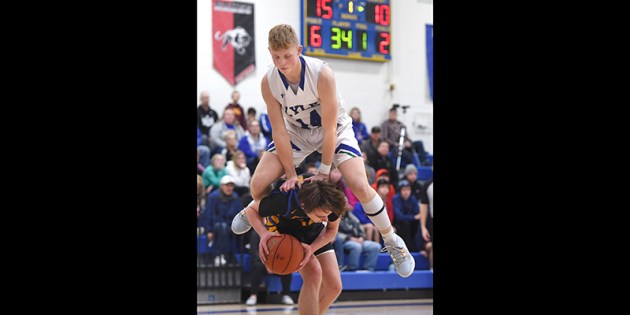 Lyle-Pacelli’s Landon Meyer jumps over Hayfield’s Trent Jellum during the first half Thursday night in Hayfield. Meyer was called for the foul on the play. Eric Johnson/photodesk@austindailyherald.com 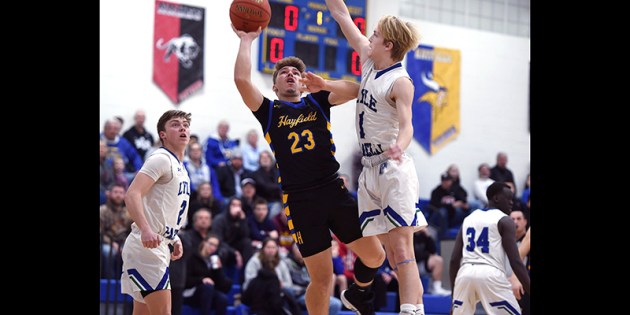 Hayfield’s Ethan Pack goes strong for an early two against Lyle-Pacelli during the first half in Hayfield. Eric Johnson/photodesk@austindailyherald.com

HAYFIELD – In a game that lived up to the hype with two of the area’s best boys basketball teams facing off, it was a defensive effort by a role player at the end that made a difference as Hayfield held off Lyle-Pacelli in a 53-52 win its Holiday Tournament Thursday.

L-P (6-2 overall) had three chances to tie the game in the final 30 seconds and its last attempt was thwarted when Hayfield junior Isaac Fjerstad was able to tip the ball away from Jake Truckenmiller as the buzzer sounded off.

Fjerstad has been thrust into a big role this season as Hayfield has just three players back from the squad that has won the last two Class A state titles. He is learning fast from his older teammates.

“We knew we needed to help on shooters, especially there at the end,” Fjerstad said. “It’s really nice because at practice, I’m with three guys who have been there for a while and the help they’ve given me has transferred over to the games.”

Truckenmiller had the ball after L-P’s Trey Anderson had grabbed his own rebound after going one for two from the line.

“I wanted Trey on the line. He played his butt off tonight and he’s the heart and soul of our team,” L-P head coach Carl Truckenmiller said. “He deserved to have that go in. This is a step forward for us. We played with the best.”

Hayfield (6-2 overall) intentionally fouled L-P while leading 53-50 with 5.4 seconds left and Mac Nelson made one of two. Trey Anderson was fouled while chasing down the rebound on the miss with 4.8 seconds

The foul on Anderson was the fifth for Hayfield’s Zander Jacobson, who had 17 points, 12 rebounds and four assists.

Hayfield committed a turnover and missed two turnovers in the last minute of the game to leave the door open for L-P, which had one turnover before the final possession.

It was Fjerstad who hit the biggest shot of the night for Hayfield when he buried a baseline three to put the Vikings up 51-44 with 3:30 left.

Hayfield head coach Chris Pack was relieved to finish with a win and he’s seen his team’s depth grow throughout the season.

“Our role players have played better here lately and as they get more experience they get more comfortable. Isaac and Trent Jellum hit some big shots tonight,” Chris Pack said. “Buay (Koak) is a good player for them and he hit some tough shots, where there was nothing we could do.”

Buay Koak scored six straight points to bring L-P within 44-42 with six minutes left in the contest, but Hayfield went back up 46-42 when Jacobson scored on a post move.

L-P built up a 28-21 lead late in the first half after Mac Nelson scored to cap an 8-0 spurt, but the Vikings had a big answer when Trent Jellum converted a lay-up on a dish from Jacobson and Jellum also converted a left handed running hook in the paint to bring Hayfield within 30-29.

The game was tied at 30 at halftime.

Hayfield senior Ethan Pack made his first three three-point attempts of the night to give Hayfield a 15-6 advantage with 12:04 left in the first half, but L-P bounced back with a 9-0 spurt to tie the game at 15. That rally was capped by a Jake Truckenmiller three-pointer.

Ethan finished with 17 points for Hayfield, as the L-P defense clamped down on him in the second half.

“They were tight on us the whole game and then I kind of went cold, and I put my faith in my teammates,” Ethan said. “They stepped up big tonight. We know we’re a really good team together. Winning never gets old and it’s always fun playing a tight game with a big crowd. You have to learn to keep things calm and we did that tonight.”

Matti did not register a point in the first half for Hayfield and Koak’s only first half points came off a tip-in on an offensive rebound.