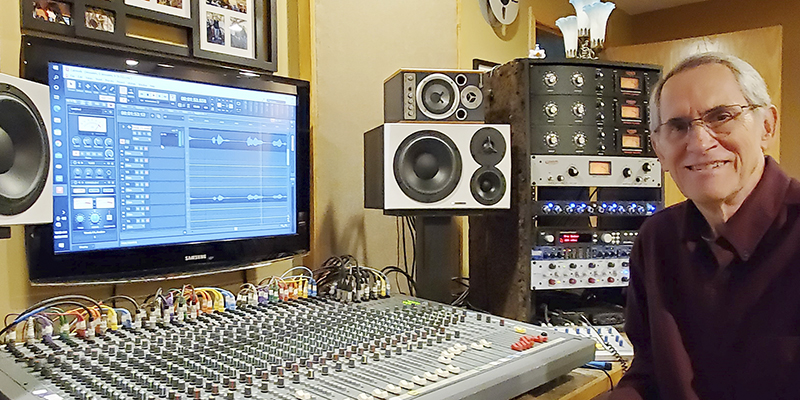 Jim King has recently released “Midnight Prayer,” an album distributed to churches and Sweet Reads Books and Candy in an effort to bring comfort to people going through hardships. Photo provided

Austin’s Jim King has a rich musical background, going far back when the family would come together and sing around the piano.

In simplest terms, music is a joy to King and something he has carried forward in a number of ways, including through his home studio.

In the midst of this musical heritage is also a desire to give back to the community through the music he produces and takes part in.

It’s the catalyst of his latest project, “Midnight Prayer,” a full-length album that had King doing most everything on the album, aside from the writing of two of its songs: “Just a Closer Walk With Thee” and “Let There be Peace on Earth.”

Jim King closes his eyes and smiles as he listens to tracks off his album “Midnight Prayer.” Eric Johnson/photodesk@austindailyherald.com

“I wanted to do something with these songs that would help other people,” King said Thursday morning, sitting before the soundboard and computer set-up that represents his home studio. “That’s why I’ve done it this way.”

King didn’t make the record to simply show off his own musical talents or even to make money. The sole reason behind the project was to help people.

The most visible part of the project is how it’s distributed — through Austin churches and Sweet Reads Books and Candy. The aim is to raise money for those in need.

King won’t see a dime from sales. Instead, all donations will go to the individual churches handing them out, which includes St. Augustine’s Catholic Church, St. Edward’s Catholic Church, Queen of Angels, Grace Lutheran Church and Crane Chapel.

“I’m giving albums to different churches in town to sell so they can raise money for Good Samaritan funds,” King said. “Years ago I was on the finance council at St. Augustine’s. People were coming to the door for a handout. There was a fund always set up for that, but it was always short.”

King’s own lengthy musical journey has held a number of well-known stops along the way, including being part of the soft rock trio Larry, David, James, which set up shop in Austin in the early 70s when the community enjoyed a deep musical environment.

Fast forward to 2013, and King was part of a fundraising effort for The Hormel Institute through the album “Spiritually Motivated.”

However, the history of “Midnight Prayer” goes back to the 1990s when King first began writing songs with no clear direction as to where they were going at the time.

The COVID-19 pandemic allowed him to spend more time on a concentrated effort to bring the album to life.

Through it all, that same joy now included purpose, and shone through with the final product which was completed in October and began going out in November.

The album is best described as Christian contemporary that King hopes will refresh the souls of  those who listen to the songs.

Throughout the process, King layered in the musical elements from the lyrics, instruments and vocals, developing the arrangements through a process of figuring out where the elements would best lay.

All of this while keeping in mind the final goal of the project.

“It’s always a joy to work on music,” King said. “Whether it’s my music or somebody else’s. For this I had the goal as far as getting this out to the different churches so they can utilize it so it’s something worthwhile.”

“I’m still hoping a lot of these songs will be healing and … it will help them get over some hard times in their lives,” King added.

It’s a logical progression to ask if King has more projects like this in mind.

“There are different projects in my mind,” he finally answered. “Can’t really say what it is at this point. Some involving other artists from the area. It will include some of my own stuff and other songs from other people.”

In all, King hopes the songs on “Midnight Prayer” are an answer for some. A point of comfort echoed in words written on the back of the album jacket.

“I hope that these songs give you joy, hope and healing.”

King said that if there are churches who don’t have the album and would like to get copies, they should contact him through Eighth Avenue Recording on Facebook.