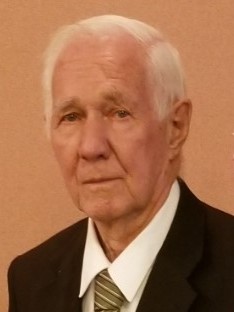 Gary was born May 11, 1933, to Stanley and Selma (Gibson) Groh of Austin, Minnesota. He is the eldest of three. A graduate of Austin High School with the class of 1953. A scholar in theology, which he took seriously with much thorough research and writing. Gary found true happiness through the ways of God.

He was united in marriage to Rose Marie (Schultz) Groh on November 11, 1956, and together had four children. They remained soul mates throughout their life, 65 years. They shared many great experiences and joys together on the way and some tribulations.

Gary learned to climb to great heights beginning as a young child, we remember a story he told us several times that at the age of five without his mother knowing they would climb up on a church steeple. Those were his goals throughout his life that he had set for himself, the ascent…

Gary was the son of a carpenter/homebuilder, and he often went to work alongside his father at an early age. At sixteen years of age, he designed his first home and he and his father built it. They built several other homes thereafter. Shortly after marrying Rose Marie, he started his own business in 1962 as a general contractor, Gary Groh Construction Co. He received a State of Minnesota Department of Highways Merit Award for Outstanding Performance in 1971 on a road construction project, Lakeview Boulevard- Wedge Street and Vine Avenue in Albert Lea, Minnesota. In 1976, while paving 21st Ave NE the entrance to Todd Park, in Austin. He set a record of 1,000 cubic yards of concrete placed in one day using 6 cubic yard ready mix trucks, about twenty trucks were put into service that day. The company produced many paved concrete roads, notably in Austin, Albert Lea, Owatonna, and Adams in the 1960s and 1970s.

Lincoln Apartments was originally slated to be demolished by the school system in August of 1977, Gary submitted two bids for it, one bid was for the demolition, the other was an offer to purchase it and then the property was then auctioned off with one other competing bidder. Gary recognized the historic importance and unique potential of converting Lincoln School into apartments. He had a vision of seeing things that other people simply could not grasp. Gary was later approached by others asking his advice for projects of a similar nature. He designed and sketched all floor plans for the apartments and hired an architect for his signature endorsement. The drawings were those of Gary with his unique vision. Lincoln Apartments opened for business in 1980. He chose to reside there with his wife, Rose from 1996 and lived there until his death.

Webster Apartments resulted with a purchase from the Austin School System in 1980, because of declining enrollment and opened as apartments in 1994. This project used all the knowledge learned from Lincoln but was in many ways a more extensive buildout. Apartment layouts flowed through the old corridors and even more unique layouts were made in this manner.

Gary acquired The Milwaukee Railroad Depot in 1997 from the Housing & Redevelopment Authority. Renovations began shortly after and January 1, 2002, the State of Minnesota Drivers Bureau was the first tenant in the converted space.

Gary loved working with wood, creating, and designing. He expressed himself more so through his vision of unique ideas, doing it outside the norm or conventional ways, a true artist and leader in that aspect. He enjoyed photography, writing, drawing, and building furniture that rivalled Henredon’s quality for his grandchildren, his family, and of course, his own home. Gary enjoyed many new adventures, innovation, going to woodworking shows and eating at Fuddruckers afterwards which Troy and him did together frequently. He also enjoyed traveling many places throughout the world and country, site seeing, and numerous vacations to many different places. Gary had a passion for flowers and annually beautified his properties.

The funeral service for Gary will be held at 11:30 a.m. on Thursday, December 15, 2022, at Worlein Funeral Home Chapel in Austin. Visitation will take place one hour prior to the service. Interment will be in Oakwood Cemetery, Austin. Worlein Funeral Home of Austin is assisting the family with arrangements. Condolences may be expressed to the family online at www.worlein.com.