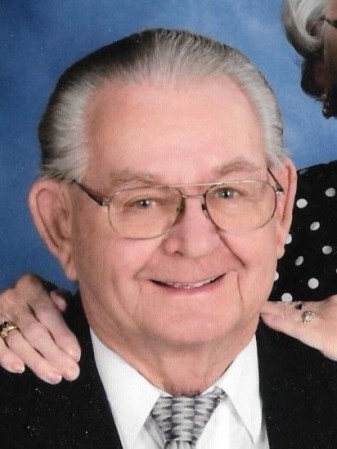 Delmond Leo Kruckeberg, affectionally called Dicky by his mother and to the rest of world, Dick, Dad, Grandpa K, and Great-Grandpa K, was born on January 8, 1935, on his family farm in Steele County, Minnesota to Leo Albert Kruckeberg and Emma Emilie Dunker Kruckeberg. Dick was the oldest son, with only his brother, David below him and the third in line behind his two sisters, Gerry and Betty who “delighted” in keeping their much younger brothers in line.

Growing up in the rural farming community of Blooming Prairie where everyone knows everyone, Dick’s work ethic was as widely known as his smile and while his work ethic and ingenuity is what drove him to success professionally, it was that smile that brought him the things in life he was most proud of.

Dick was a senior in high school in 1952 when he boldly proclaimed that there was one person who would forever own those dimples that flanked his famous smile and after graduating from Blooming Prairie High School that same year, entering basic training in San Diego, California, and returning to Minnesota as a Private reservist in the US Marine Corps, he made good on that proclamation. On January 24, 1954, he married Lorraine Augusta Filley at Grace Lutheran Church in Dodge Center, Minnesota and his sweetheart Lorraine held those dimples for the rest of their lives.

In 1959, back in the Blooming Prairie area, Dick worked for Josten Manufacturing and as a farm hand before making the move to Rochester and purchasing the Phillips 66 Station. The move home to Minnesota did not just bring them home, it brought them their son, Craig. It was 1972 when Dick opened his Recreation Sales and Rental in Rochester and two years later, Dick and Lorraine welcomed their last child, Rose into their home, hearts, and family.

In 1974, Dick started driving semi for Don Fisher Oil Company in Rochester, Minnesota. In 1977, Dick and Lorraine had the opportunity to purchase the Prairie House restaurant in their hometown of Blooming Prairie. Life had come full circle and brought them and their family back to the community that they had always loved, the community that had always been home.

After retiring from the restaurant business, Dick began driving as an owner/operator for Midwest Specialized Transportation. His #54 blue, white and chrome semi was recognizable from coast to coast, border to border, creating a legacy that would make him the idol of all of his grandsons for decades to come. In 1984, Dick received the Million Mile Award from Midwest before retiring and beginning his company Spray Control Systems, Inc. (SCSI), most famously known as Minimizer where he invented a plastic fender that changed the trucking industry forever.

As their company grew, so did their community involvement. Dick and Lorraine spent many hours volunteering in their community, especially during Blooming Prairie’s annual Fourth of July event and with the Lion’s Club. It was important to give back to the community that they so adored. They were also lifelong members of St. John’s Lutheran Church of Claremont. Eventually Dick retired, splitting his time between Minnesota and Arizona. He collected all things Farmall and spent time enjoying creating stain glass pieces with his family.

Dick left this world to join the woman that still holds his dimples on December 2, 2022. He leaves behind the legacy that was most dear to his heart: his children, Cindy and Mike Schaefer, Connie and Rick Coon, Candy and Charlie Schmidt, Craig and Robyn Kruckeberg, and Rose Scheibe; his grandchildren and great-grandchildren, Trina Orr, Courtney and Shana Schaefer, Tracy and Jaime Valencia, Cassie and Dan Fiacco, Tiffany Schmidt, Cullen and Melissa Schaefer, Chelsea Schmidt, Jessica Kruckeberg and Troy Huber, Nanner Kruckeberg and Jason Weeks, Tyler Kruckeberg, Trevor and Katie Kruckeberg, Michael Scheibe, John and Kasey Scheibe, Michelle Scheibe, Chamberlain and Christopher Eisner, Dalia Valencia, Devin Schaefer, Felicia Krampitz, Emily Krampitz, Charley Schmidt, Finley Fiacco, Logan Orr, Isabella Valencia, Carter Branick, Taylor Gustavson, Cayden Branick, Cash Leo Kruckeberg, Mabel Schaefer, Jack Delmond Weeks, Emma Lorraine Weeks, Linnea Louise Kruckeberg, and Dominic Eberle. He was further expecting his first great-great grandchild at the end of this month. Finally, he is survived by his brother and sister-in-law, Ronald and Arlys Filley as well as many Kruckeberg and Filley nieces and nephews. He was preceded in death by his sweetheart Lorraine; his granddaughter, Trisha Wayne; his grandson, Matt Orr; his parents; and his siblings.

It is the family’s wish that any memorials be sent to the Leo Augusta Childrens Academy, PO Box 127 Blooming Prairie, MN 55917, in memory of their patriarch.