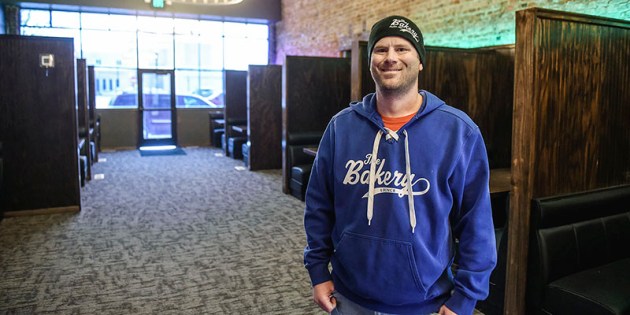 Curtis Sorenson stands in the dining room of The Downtown Grill, whiich he hopes will be fully open by mid-January. Eric Johnson/photodesk@austindailyherald.com 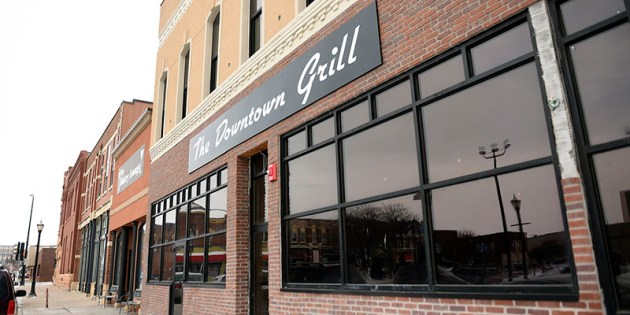 The Downtown Grill will soon be opening, providing another dining option in downtown Austin. Eric Johnson/photodesk@austindailyherald.com 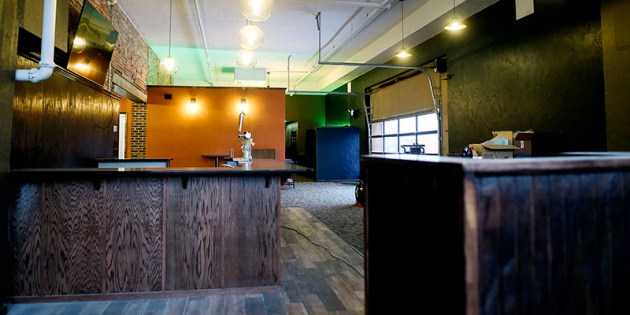 A bar area sits just off of the main dining area and will have access to a large patio during the warmer months. Eric Johnson/photodesk@austindailyherald.com 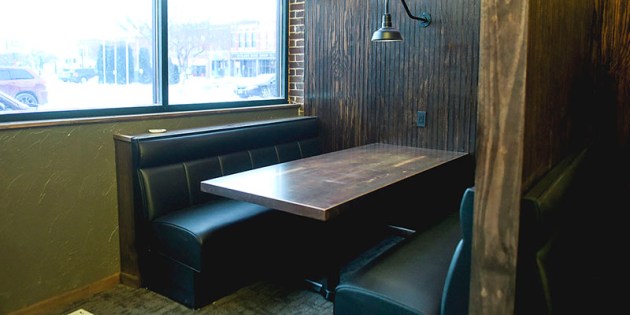 Diners visiting The Downtown Grill when it opens will be able to dine in large booths with soft ambiance of the establishment. Eric Johnson/photodesk@austindailyherald.com

Downtown Grill looking to open by mid-January with fine dining

Curtis Sorenson knows an opportunity when he sees it.

That opportunity comes in the form of The Downtown Grill, which Sorenson hopes will open in early January.

“I would like to be soft on the first if I can,” Sorenson said Monday, standing in the nearly complete restaurant situated right next to The Bakery Lounge. “I would love to be fully open by the middle of January and that’s feasible.”

With just a few things left to be completed, including a large 90 by 13 foot patio, accessed through a garage door that can be opened to the outdoor dining area on the east side of the building, the Downtown Grill will offer a unique dining experience to downtown.

With soft lighting, exposed brick walls and large 72-inch booths, Sorenson is hoping to give diners a wide assortment of food and drink options.

“I wanted a full-blown restaurant,” he said. “We’ll have a lot of the same stuff, but some new stuff. We’re going to have things here you can’t get anywhere else.”

That will include grinding beef in house for burgers that Sorenson said will be one-of-a-kind as well as prime rib on Fridays and smoked foods ranging from main entrées to appetizers, on Saturday nights.

“I got a huge commercial smoker,” Sorenson said. “On Saturdays we’re going to have smoked entrées. My brisket is amazing. I almost say I screwed up, I should have opened a barbecue joint, but that takes a lot of work.”

Work on the restaurant really started progressing after Sorenson and financial backer Terry Hall, signed the lease around September 2021 with keys being handed over by Christmas.

Demo work started soon after in the two buildings that would become The Downtown Grill, which formerly housed Margaritaville and Paradise Island bars. Work also included the apartment upstairs, which are now fully remodeled and currently rented.

However, seeds of the idea for what would eventually become a restaurant were in a lot of ways planted not long after The Bakery remodeled in 2016.

“Shortly after that I started thinking — I wanted a restaurant,” Sorenson said. “When I did that I knew I wouldn’t have room for food. The initial plan was to have some kind of food in the back.”

That original plan included bar staples like high quality burgers, but as time went on Sorenson realized The Bakery wasn’t the place.

“It’s been great — pool, darts, tournaments, leagues — everything about that is awesome there,” Sorenson said. “And this came about.”

Sorenson began working with city leaders, who liked the idea, but the two sides couldn’t come together on the financial end.

“They loved what I wanted to do, but the numbers didn’t add up for me,” Sorenson said.

Soon after, however, Sorenson said he met Hall, who already owned buildings in Austin and was interested in investing more in the community. While the numbers didn’t work for Sorenson, they did work for Hall.

While he’s excited about the idea of what The Downtown Grill can bring to downtown Austin, Sorenson also admitted that if this opportunity wasn’t available, he doubted it would have progressed this far.

“I would say if it wasn’t next to my bar, I don’t know if it’s something I would have done, but the opportunity presented itself so here we are,” Sorenson said.

While both the Grill and The Bakery will be accessible through a newly created door between the establishments, Sorenson is quick to emphasize they are two separate entities.

“It’s a different atmosphere,” Sorenson said. “In (The Bakery) it’s a party. This, I want to be fine dining as far as ambiance and the feel.”

The Downtown Grill is split into two parts. The main dining area is in the space closer to The Bakery and a bar area, complete with high top tables and a few more booths, make up the eastern portion of the Grill.

Not only will there be the aforementioned foods, which will also include pasta and seafood along with hand-cut fries, blooming onions, onion rings and assortment of Hormel products, it will also include a large wine and cocktails selection.

Sorenson expects to have between 15-20 wine choices.

Once open, Sorenson expects The Downtown Grill to not only stand apart, but also complement a growing downtown.

“I think it’s going to complement downtown very well,” he said. “There are already multiple places downtown to eat. We’re just throwing one more into the rotation.”