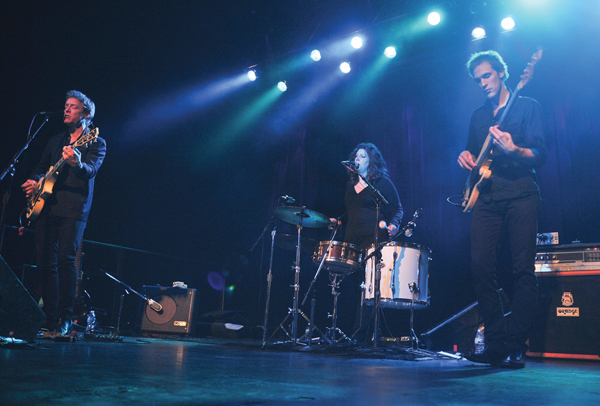 The Duluth band Low performs at First Avenue in Minneapolis. Singer Mimi Parker has past away at age 55 after being diagnosed with ovarian cancer. Herald file photo

DULUTH, Minn. (AP) — Mimi Parker, whose soothing vocals helped propel the Minnesota indie band Low to critical acclaim, has died at age 55, nearly two years after revealing that she had been diagnosed with ovarian cancer.

“Friends, it’s hard to put the universe into language and into a short message, but she passed away last night, surrounded by family and love, including yours,” her husband and bandmate Alan Sparhawk, announced on Twitter Sunday.

“Keep her name close and sacred. Share this moment with someone who needs you. Love is indeed the most important thing,” Sparhawk wrote.

Parker was Low’s drummer and songwriter, forming the band with Sparhawk in 1993 in Duluth, Minnesota. They built success with beautifully simple instrumentals and harmonious vocals, standing out in what would later be defined as the decade’s “slowcore” movement, a subgenre of alternative and indie rock.

Low’s 1994 debut album, “I Could Live in Hope” received critical acclaim, and the band went went on to release 13 albums in the years that followed. Rocker Robert Plant was among the musicians lamenting her loss.

“We’ve been drawn to the music of the great duo Low from Duluth, Minnesota, and sadly tonight we know that unfortunately we’ve lost one of the two people. So we give our songs tonight to Mimi and our love to Alan,” Plant said during a concert in Scotland on Sunday.

The group’s original bassist was John Nichols, who was followed by other rotating members throughout the years.

Parker met her husband in grade school in the small town of Clearbrook in northern Minnesota. Their faith as Mormons was often found in their song lyrics which alluded to end times, morality and redemption.

Parker is survived by Sparhawk and their two children, Hollis and Cyrus.