‘It’s been an amazing ride for me’ 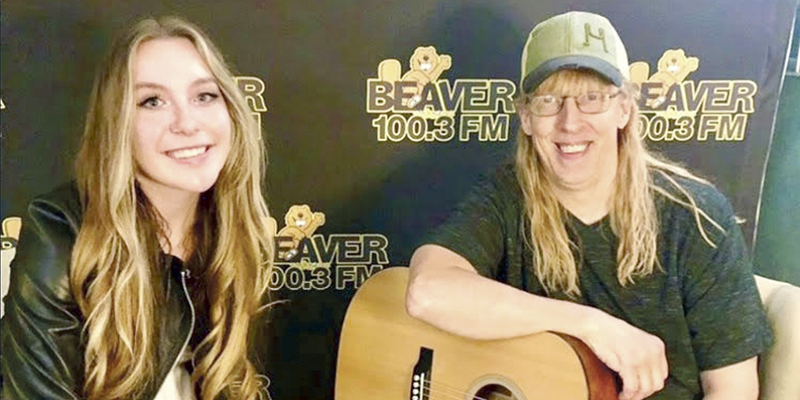 It’s been four years since Randy Barnette left Austin to pursue a musical dream in Nashville and since that move he’s made every moment count.

This past October Barnette, who still has ties to Austin, was recognized for the hard work by being named Guitarist of the Year in the Musician of the Year Category during the eighth annual Josie Music Awards held at the Grand Ole Opry in Nashville.

The Josie Music Awards is the world’s largest independent music awards show, something that wasn’t lost on Barnette when we took the stage to accept his award.

“It’s such an amazing venue and to hear my name mentioned in those halls was crazy,” he said Monday.

Barnette is currently a freelance guitarist and melody writer and has had the opportunity to work with a number of up-and-coming artists while in Nashville, including 19-year-old Bailey James who has seen success on the Billboard charts.

“She’s just been tearing it up,” Barnette said.

He also has had songs included on movie soundtracks. Most recently he will have songs in both the holiday movies “Hashtag Blessed” and “Sappy Holiday,” both of which will be streaming.

These moments and more have been part of a non-stop run in Nashville that has seen Barnette on the move in one of the most musically important cities in the nation.

The Josie Award is just one more recognition for a former Austin man who has taken every opportunity with a sense of positive affirmation.

“I can’t emphasize enough to be in the right state of mind and stay positive,” Barnette said. “I made that my best friend. If you keep doing that you just keep getting strong.”

When Barnette first arrived in Nashville he worked for a record company, but after a while shifted to a freelance framework.

When an artist wishes to work with Barnette, they will send him their songs and he’ll begin the task of learning them. When that’s all taken care of, Barnette will often meet up with the artist an hour before the show to rehearse those songs.

He will also create music charts prior to the show to further familiarize himself with the music at hand.

During his time Barnette has had the opportunity to perform at a number of different venues for audiences of all sizes. 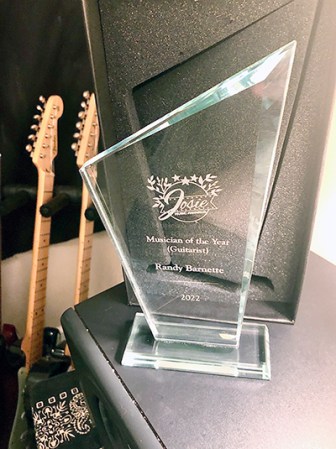 Barnette’s award for Musician of the Year (Guitarist). Photos provided

Still, this latest recognition is one of the big ones and Barnette has taken the moment in wholeheartedly. Not only has he been able to work with some of Nashville’s most talented people, he’s also been able to gather product endorsements including his own line of signature guitar strings through Curt Mangan Fusion Matched Strings.

“It’s been an amazing ride for me,” he said. “There’s been more ups than downs.”

At the same time, the award itself was something of a surprise. There were 14 other guitarists in his category and at the time Barnette was somewhat satisfied just to be part of the ceremony.

He said that included in the email notifying him that he had been nominated was a single stat that put the entire thing into perspective and that those ultimately picked represented just 1.8% of the around 52,000 submissions to come in .

“I know it’s a big deal. A huge deal,” Barnette said, who was also nominated for Impact Song of the Year and Modern Country Song of the Year, both of which he had co-writes on.

Barnette was seated among a group of people he had never met before, but his name being called and a sudden outburst quickly told them all who he was.

“I made my way up and I didn’t even look at the presenters,” he continued. “I was in such shock I went straight to the podium and started rambling.”

The whole moment was such a shock to the system that Barnette said he very nearly sprinted off the stages.

“It happened so fast that I had to get out of the place and get a Diet Coke,” he joked.

While admitting that he wished he would have taken a little more time to soak the moment in, Barnette continues to bask in the light of the award.

At the same time though he admitted that there is added pressure for him, even if he is seeing a few more doors open and some bigger names reaching out.

“Now there’s a little bit of added pressure just because you think now I have to step up my game a little more,” he said. “I still have to maintain. You just keep working hard, you keep networking.”

Part of his lamentation of not taking in the moment more and not sticking to a speech he was encouraged to write ahead of time, was not being able to thank those that had helped him get this far.

And that reaches back to Austin.

“Bill Apold helped me get my start,” Barnette said. “I have to give props to him.”