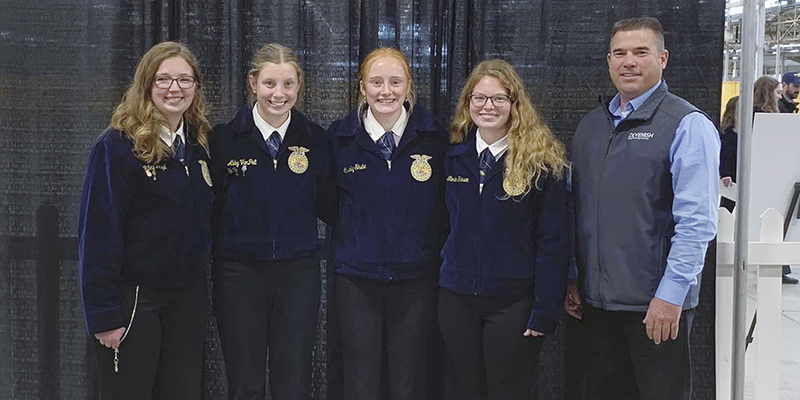 A foursome from Austin High School’s FFA group  made history as the first team from the program to bring back a plaque from the National FFA Convention held in late October in Indianapolis.

The team of Gloria Hansen, Riley Hetzel, Cassidy Shute and Abby VanPelt came away with a silver plaque in livestock evaluation team, the first time in three opportunities a team has come back from the national convention with such an award.

“It was an experience of a lifetime,” said VanPelt, a junior and the team’s youngest member. “It was such an honor to represent.”

Three of the team also earned individual silvers and another a bronze during a competition that pitted Austin’s crew against 44 other teams, many of which were made up of college competitors going to college for this very thing.

“That was really good for us,” said Shute, a senior. “The southern states are really good at this. Just for being a small community, we went out and showed our best.”

That performance came from a lot of challenging circumstances after winning the state competition in May. That alone was an accomplishment for a team that actually had to rebound from a seventh place finish in the Region 8 competition.

To coach John Carroll, that willingness to go back to work showed him determination.

“It tells you they have the ability to stay focused and persevere,” Carroll said. “One contest at a time and that’s what I tell them.”

The perseverance served them well when it came to a very strenuous competition of the national stage.

After the state competition, opportunities to work together and train became few and far between. Both Hansen and Hetzel are now students at South Dakota State University, while Shute and VanPelt remained behind at AHS.

“It made it very difficult from a coaching standpoint,” Carroll said. “To get all four of them judging the same when you can practice together makes it so much easier. For the four of them to come back together again … it is a big deal.”

The team was able to take classes online and Shute and VanPelt were able to go to regional competitions to practice, but it couldn’t make up for the four working together.

“It was a lot more difficult because we couldn’t go home every weekend,” Hetzel said. “I still looked at classes online, but it was hard not to practice with the team.”

The competition as well was much more rigorous with the team competing in 12 classes. The team had to judge as close to the judges as possible, all working on an individual basis with scores later tabulated together to reach a final finish.

Not only was there judging, but there was also oral reasoning in which the competitors had to explain to judges their reasons for the choices they made.

“When judging on a national level, the competition and guidelines are tougher by far,” Hansen said. “The room was completely silent besides the quiet noises from the animals being judged. No talking between contestants is tolerated for the eight plus hours we are there, and everyone’s last focus is on those four animals in a placings class or eight in a keep/cull performance class.”

Ultimately, the silver plaque finish put the team in the middle of the pack, but that’s impressive on its own considering the competition they are going against.

“This was the best of the best,” VanPelt said. “This is what they want to do collegiately.”

At the same time, there is a bitter-sweet element to national convention — this team will never be able to do this again.

Once a team wins the state competition and goes to nationals, it is done and can’t go back. This is done to give more opportunities to other teams.

At the same time though, everybody involved is hoping that this finish is a jumping off point for other teams coming up in AHS’s FFA program, something that has both the coach and this year’s team excited.

“The more people we have make it so much more fun,” said Shute, who along with VanPelt, will now be part of a seven-person team competing in ag issues. In that competition, teams pick an issue and then use it as a platform to inform.

Regardless of the future, the experience has left an indelible mark on the four from this year’s judging team.

“My biggest take away from this event is to stick with the things and the industry you love,” Hansen said. “Stick to your instincts and work with your team to do the best you can.”