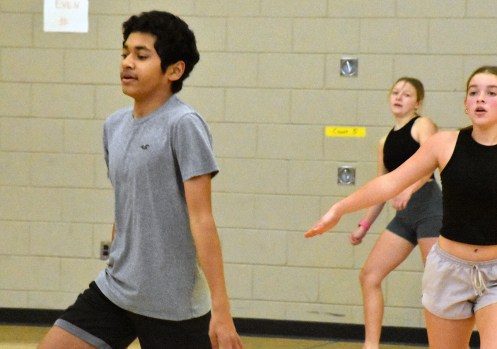 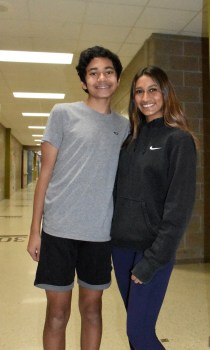 Salman Masood, left, is following in the footsteps of his older sister Salma, right, as he has joined the Austin Packer Dance Team this season. Salman is the first ever boy to compete for the Packer dance team and Salma is currently a member of the Minnesota State University in Mankato dance team. Rocky Hulne/sports@austindailyherald.com 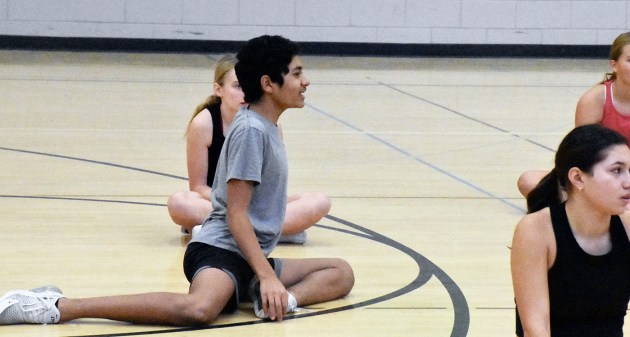 It takes a lot of guts and courage to be the first person to try something and Austin freshman Salman Masood has plenty of that, along with plenty of guidance in making history this winter.

Masood is now the first ever boy to compete for the Austin Packer Dance Team as he is following in the footsteps of his older sister Salma Masood, an AHS grad who is now dancing at Minnesota State University in Mankato.

“I was still watching APDT after my sister graduated and I was around the dancers a lot,” Salman said. “I felt like I should do it this year. It’s been fun and everybody’s nice.”

Salman has a background in dancing, but most of it was individual performances. He’s quickly learning about the nuances of dancing with a team and he’s also learning the commitment it takes to be a member of APDT, which won its first state title last year in its 20th straight state meet appearance.

“It’s a lot more pressure, especially because they won state last year. We have to defend our title,” Salman said. “You have to train a lot and with school, it’s a lot to keep up with. But it will all be worth it in the end.”

APDT took third in state when Salma was a senior in 2020. Back then Salman was one of her biggest fans, but now the roles have been reversed. While Salma competes at the college level, she still has her eye on Austin and her little brother, who is blazing a trail for any future AHS boys who look to give dance a try.

“I’m really excited for him. I’m happy that he’s trying it and putting himself out there,” Salma said. “Being the first boy comes with a lot of pressure, but he’s been doing this for so long and I’m glad he’s actually dancing (with the team).”

Salma said that dance helps boost a positive mindset and it also helps athletes learn how to manage their time. While her time is filled with school and dance, Salma will always make time for Salman.

“I almost feel like his manager,” she said. “I’m always trying to help him and make sure that he’s succeeding.”

The MSHSL started allowing boys to compete in dance in the 2019-2020 school year, and Salman was the first boy to show interest in the sport in Austin.

Austin head coach Kayla Sellers said it has been great to bridge the gap and welcome Salman, who was already very familiar with the team.

“I’ve known Salman since he was little and he’s always been sending me videos of him dancing. I’ve known him for years and he’s always known about us. He’s come in as such a fun addition to our team and his work ethic is amazing,” Sellers said. “It’s a really special thing and to be more inclusive is great. It’s never a bad thing to be inclusive and we love having Salman. If more boys are interested, that would be awesome. There’s quite a few boys in Minnesota dance this year and I think it’s growing in popularity.”

Salma is in her third year at MSU and she is studying psychology with an emphasis on counseling.