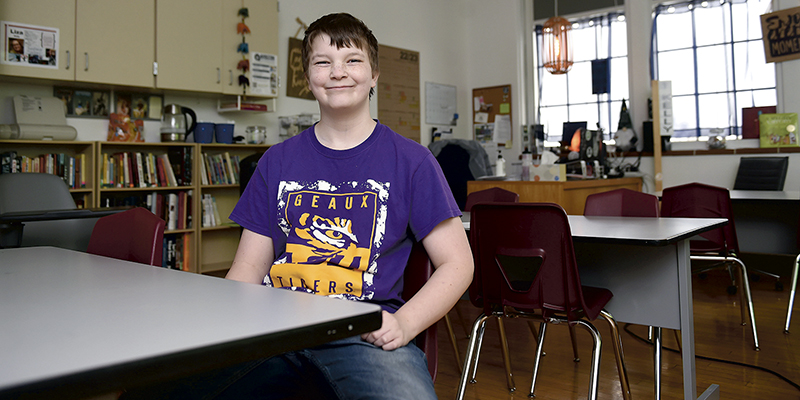 Austin Alternative Learning Center sophomore Camerohn Cox has a clear idea of what he wants to be.

A leader and he is already well on his way after being elected as a Minnesota Association of Alternative Programs (MAAPs) Stars state officer.

“I joined MAAPs Stars to help myself to be a better leader because I want to be a leader some day,” Cox said from the classroom of Liza Kelly. “I want to be in the military some day.”

With an eye of following past family members into the military, specifically the Air Force, Cox sees the AALC elective as a route to reach that goal.

MAAPs Stars focuses on leadership and vocational skills and it will put students like Cox into those leadership roles from the very start.

State officers and the MAAPs program takes an active role in speaking out about the benefits of ALC education, a program that oftentimes faces hurdles of preconceived notions that students in Alternative Learning Centers are troubled kids.

The reality is AALC along with other such programs, simply provide alternative ways of learning for students who may struggle to learn in conventional ways.

In this way, MAAPs Stars plays a crucial role in getting that word out.

“We did a leadership conference in October and that’s where (Camerohn) got elected,” Kelly said. “Then in February we will go to the Capitol and talk to lawmakers about alternative ed and why they should support it and then we have our big events conference in the spring where they take their projects.”

Cox said joining MAAPs was something of an adjustment.

“It was kind of weird because we were doing all of this leadership stuff, but eventually I got used to it and I made some friends here,” Cox said.

Being a spokesman for AALC’s benefits through MAAPs Stars has been embraced by Cox, who said that he struggled with grades before coming to Austin’s program.

He uses that experience to extol the benefits and virtues of ALC programming.

“We discuss how to change people’s perspectives of the ALC and how they think about it,” Cox said. “We just show people what ALC is about.”

“In my traditional schooling, I’ve never really got good grades at all,” he continued. “In ALC they help you through it and they try to teach you the things you need to know. MAAPs helps me reach that goal because it shows you not just how to be a leader, but it shows you how to work through all of your stuff right.”

For instructors like Kelly, the changes she sees in students who embrace the program and MAAPs, which traditional averages 15-20 students every year, is inspiring.

“I, and I think Matt Schmit too, would say it’s probably one of the most important classes we have because a lot of our kids come to us with very little academic confidence,” Kelly said. “That’s kind of one of the areas we try to build on.”

“It’s very moving, especially when I get these kids here at the beginning,” she added.

For Cox, he understands the opportunity he’s been given.

“I’m gifted to have this opportunity to come in here and learn how to gain confidence and all of my education,” Cox said. “I just want to gain from this all of the memories of the fun stuff we did.”