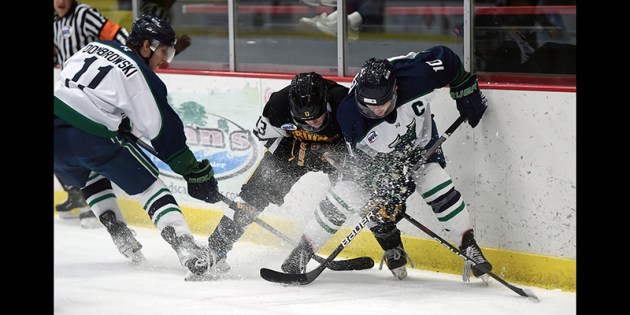 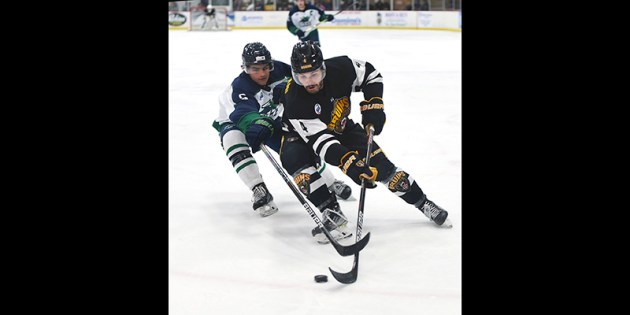 Austin’s Austin Salani angles toward the net during the second period while under pressure from North Iowa’s Paavo Hiltunen Friday night in Riverside Arena. Eric Johnson/photodesk@austindailyherald.com 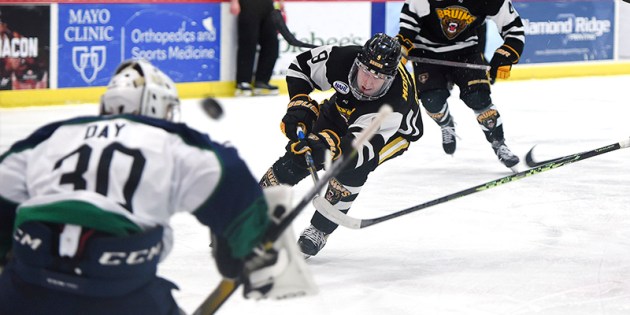 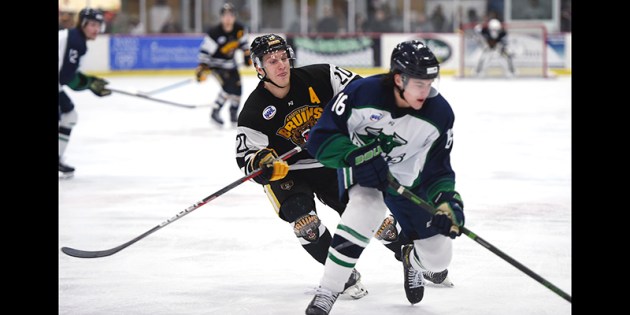 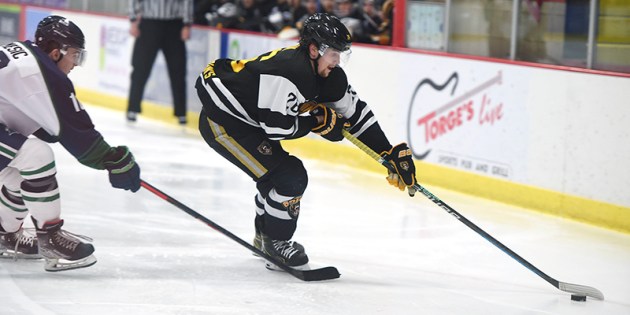 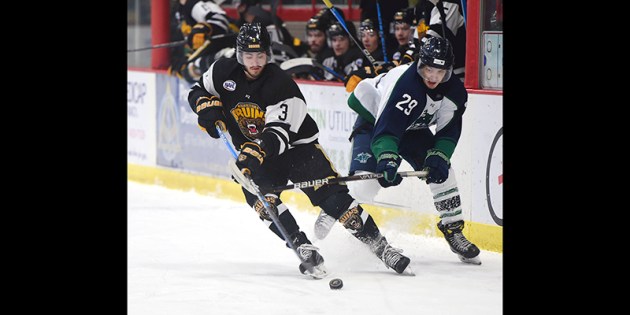 The Austin Bruins ran into a hot goalie as their hot streak cooled off in a 3-2 loss to the North Iowa Bulls in Riverside Arena Friday night.

The Bruins out-shot the Bulls 36-17, but their six-game winning streak came to an end due to an effective night from North Iowa goalie Mitch Day.

“Their goalie played outstanding. He won them the game, no questions asked,” Austin head coach Steve Howard said. “That’s the nature of the beast. We made their goalie look good with most of our shots and they won some battles in front of our net, which can’t happen.”

North Iowa went up 3-1 when Eli Miller scored a power play goal during a pile-up near the net with 4:27 left in the game.

Austin pulled its goalie with three minutes left and it crept within 3-2 when Austin Salani scored with 1:27 left.

The Bruins (14-3-1-3 overall) had a pair of power plays within the first 10 minutes of the final period, but they came up empty on both opportunities. Walter Zacher was denied on a one-on-one with Day with 8:52 left in regulation, and Day stopped Zacher on a point-blank look with 6:30 left.

“You can’t necessarily be overly mad about losing tonight,” Howard said. “We want to win all of our games, but at the end of the day we played our game and we just allowed some goals that shouldn’t have happened and their goalie made some huge saves. Hats off to him.”

The Bulls (12-10-1-0 overall) took a 2-1 lead late in the second period when Max Scott got near the net and navigated a shot through for a score.

Bruin goalie Ethan Robertson was coming off of consecutive shutouts, but he allowed a first period goal when North Iowa’s Landon Peterson found the net. Robertson was banged up on the play and was replaced by Trent Wiekmen.

Austin tied the game at 1-1 when Ocean Wallace found connected with Josh Giuliani, who hammered home a for a pin-point pass for a one-timer power play goal.