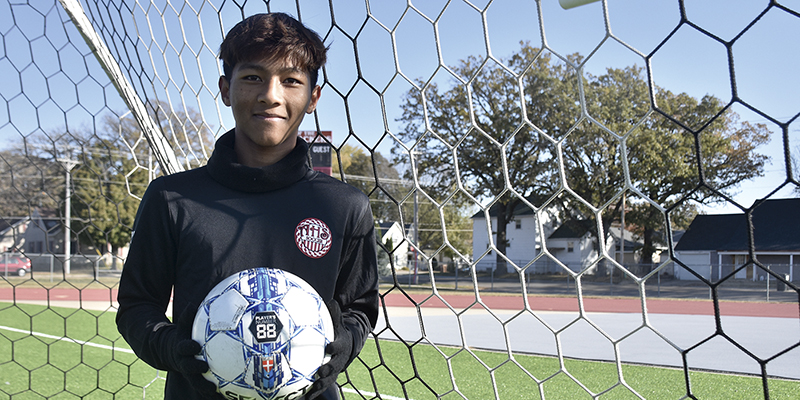 Austin sophomore Juju Thwang is almost always the smallest player on the field, but this year he’s commanded the most attention.

Nearly every single opposing coach to take on the Packers this season has circled Thwang’s No. 4 as the guy they don’t want to beat them. He’s seen double teams and triple teams, and usually those players have a big size edge on him.

But the quick-footed Thwang hasn’t slowed down or backed down. He’s continued to play the only way he knows how, ever since he was brought up to the Packer varsity squad as an eighth-grader.

“I have to keep applying pressure and I have to try to be like Henry (Tolbert) used to be and keep going,” Thwang said. “I don’t see the bigger guys as scary opponents. I just keep going. Playing with older guys has helped me a lot, because usually the defenders are a lot taller than me.”

Thwang began playing with older players when he was still in elementary school as he looked up to Packer greats like Tolbert, who was named Mr. Soccer for Minnesota in his senior season, Andres Garcia, who now plays at St. Cloud State University, and Poe Reh.

All of those players showed Thwang what it’s like to be a leader and now Thwang is taking on that role as a younger player on a state-bound team.

“When we practice, Juju is instructing and bringing up the intensity,” Austin head coach Jens Levisen said. “He’s using his voice and he’s not trying to hide behind only being a sophomore.”

Thwang has learned to be more vocal this year as the Packers have battled through injuries and some tough losses throughout the season.

“I just have to make sure my teammates are keeping their heads up and staying comfortable,” Thwang said. “I enjoy setting up my teammates, but I also like scoring goals.”

Thwang’s goal tally has been down due to the attention he has received from defenses, but his presence has been enormous for the Packers.

“He’s a tenacious player and he’s that little spark plug. He’s going to get after it and he’s not afraid of taking on an opponent,” Levisen said. “He’s also willing to make that pass and he understands how to play through coverage. He’s going to keep doing what he’s going to do and the opponent is going to try and keep up.”

Austin senior Joe Ewing has played with Thwang for three years and has high hopes for the future of the Packer program under the leadership of Thwang.

“It’s been incredible watching Juju mature as a player and person,” Ewing said. “He’s stepped into a leadership role for a young guy and everybody respects him. We’re lucky to have him.”