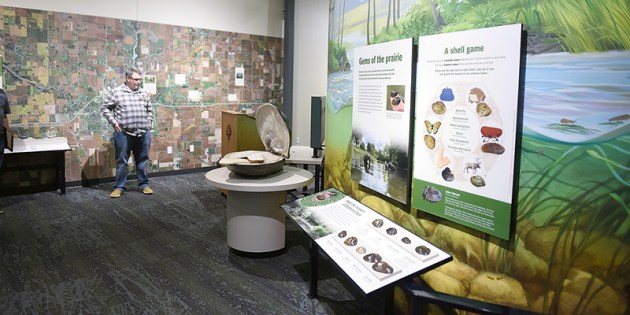 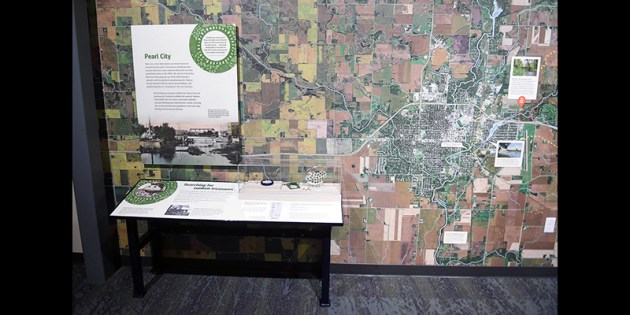 A portion of the new mussels exhibit includes a history of the community when it was known as Pearl City. Eric Johnson/photodesk@austindailyherald.com 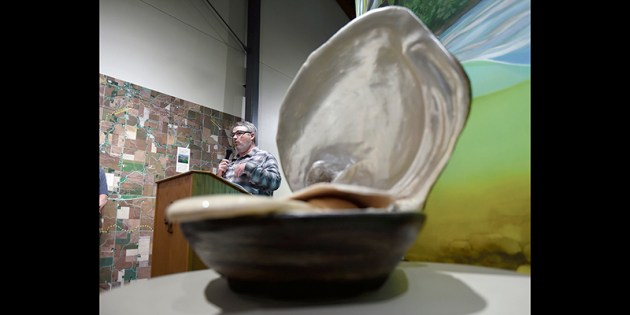 Jay C. Hormel Nature Center Director/Nationalist Luke Reese talks about the opening of the new mussels exhibit, while in the foreground is the exhibit’s large replica clam. Eric Johnson/photodesk@austindailyherald.com 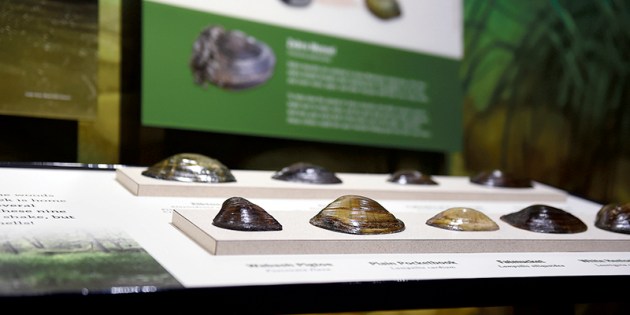 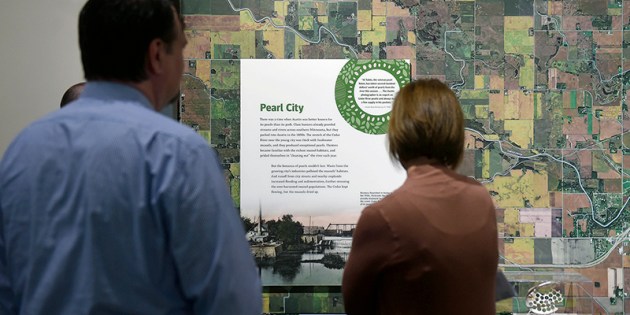 People check out a part of the new mussels exhibit, which opened Wednesday at the Jay C. Hormel Nature Center. Eric Johnson/photodesk@austindailyherald.com 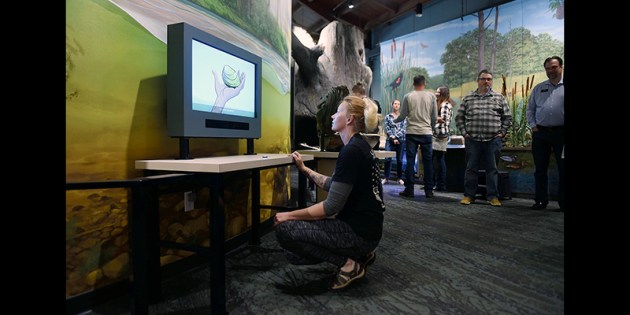 Freshwater mussels propegation biologist Lindsay Ohlman watches the video “Return of the Mussels: From Pearls and Pollution to a Scientific Solution” at the new mussels exhibit at the Jay C. Hormel Nature Center Wednesday. Eric Johnson/photodesk@austindailyherald.com 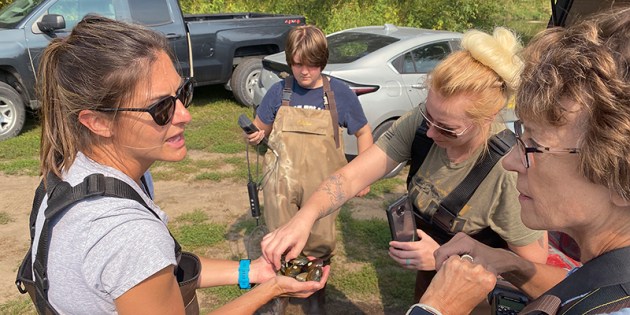 Photos of when the DNR team reintroduced mussels in the Cedar River on Sept. 14 in Lyle Township (one of the three reintroduction sites). Photo by Rim Ruzek 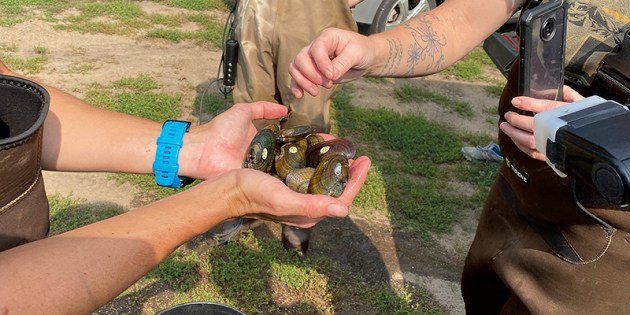 Mussels to be reintroduced in the Cedar River on Sept. 14 in Lyle Township (one of the three reintroduction sites). Photo by Tim Ruzek

The exhibit, housed in the Nature Center’s Interpretive Center, is an interactive experience, which includes a video titled “Return of Mussels: From Pearls and Pollution to a Scientific Solution,” a large wall-mounted map of Austin and its waterways and a large touch-and-feel model of a clam 12 times the size of a real mussel.

On another wall is a large mural showing both an above and underwater scene rsembling the ecosystem of Austin’s own Dobbins Creek.

Exhibit designer Sarah Zwier led the planning and production process and the Mower County HIstorical Society helped furnish harvested pearls taken long ago as well as a large clam shell that had holes drilled into it to create buttons.

“This has been one of the most fun projects I’ve worked on,” said Nature Center Director/Naturalist Luke Reese during a short ceremony.”It’s not often you combine history with natural history, with conservation and tell a succinct story.”

The exhibit came in at around $140,000 and was largely funded through the Friends of the Hormel Nature Center, which came up with $120,000 for the project. Another $20,000 came from Mower and Freeborn counties’ state funds for aquatic invasive species prevention and awareness, which is part of the exhibit’s messaging.

“This whole collaboration … these are the scientists doing the work,” Reese said. “In turn, we want to sell the story of mussels.”

The project at the Nature Center has come together relatively quickly Reese said, but the conversation of mussels has been carried forward since 2016, when an ambitious plan was launched to reintroduce mussels to the Cedar River in an effort to try and build up the dwindled mussel population.

The process started with growing native mussels in East Side Lake, which is part of Dobbins Creek, a Cedar River tributary. The mussels are then placed at three separate points along a 15-mile corridor that stretches into Iowa.

Madeline Pletta, a state mussels propagation biologist with the project, which is funded by the state’s Legislative Citizen Commission on Minnesota Resources, was in Austin Wednesday to see the exhibit for the first time.

“I was completely blown away when I walked in,” she said. “I still have goosebumps. It’s remarkable. I love coming to Austin because you are our cheerleaders.”

Mussels are integral to the health of rivers, streams and lakes, but the Cedar River’s population was overfarmed in the search for pearls from about 1890 through the early 1900s. While the city was named “Pearl City” for the number of pearls harvested, it also nearly wiped out the entire population.

Pollution also took its toll on the body of water, however, in recent years the stream has seen a revitalization and Pletta said that the river is now at a point where not only is the water clean enough, but the fish population is back to where it needs to be to help foster the growth of mussels.

She said that mussel larvae will attach to the fish in their gills and fins and be transported up and down the system.

“Generally where you see fish congregating you see populations of mussels,” Pletta said.

Before, repopulating the mussel population was difficult because of all the dams throughout the Cedar River into Iowa.

“There was just no opportunity for mussels to restore themselves,” she said.

The Cedar is one of three rivers in Minnesota where this kind of work is being done in order to rebuild populations. The other two, Pletta said, are the Cannon River running through Northfield and the Mississippi River in Minneapolis.

To date, there have been 6,818 native mussels placed in the Cedar River at three locations. A vast majority being black sandshell mussels, however, Pletta is hoping that more varieties will be placed as time goes on.

“The Cedar River is super exciting because in smaller rivers we should see an impact within 5-10 years,” she said. “It’s a benefit how things move much faster than on the Mississippi.”

And now, this entire story is being told at the Nature Center, which not only tells the story of mussels, but the story of how a waterway can rebound.

“A lot of good stuff is happening,” said Tim Ruzek, president of the Friends group and the Cedar River Watershed District’s outreach coordinator. “This has been going on for the last decade plus. We’re seeing the benefits of good water quality.