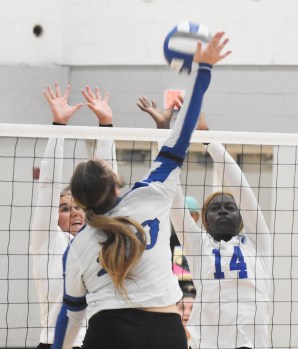 Austin grad Joy Deng (14) goes up for a block for the Blue Devils Wednesday. Rocky Hulne/sports@austindailyherald.com 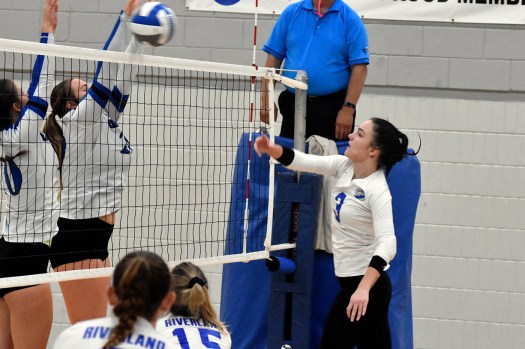 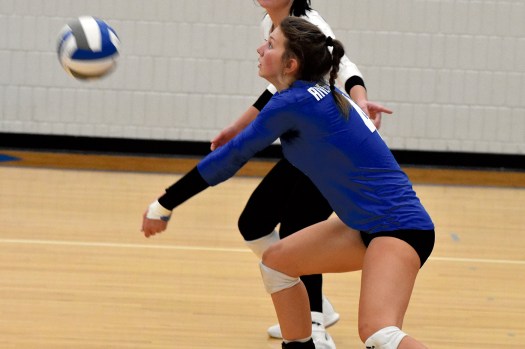 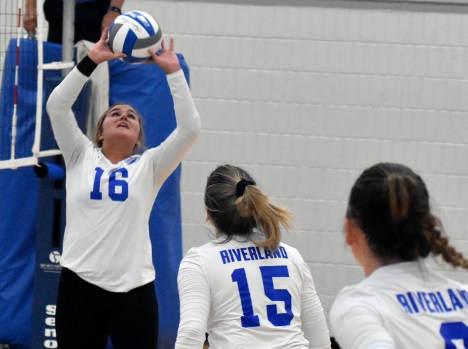 The Blue Devils tied the final game up at 13-13 when Grace Frost put down a tip kill, but Minnesota West’s Katarina Polzine blocked a hit to make it 14-13 and West finished the match with a kill in the back row.

Riverland sophomore libero Mackenna Krause, a Stewartville grad, had a back row kill to win the fourth game 25-23 and she also served an ace to give RCC a 5-2 lead in the final game.

“It was so fun. We talked a lot more than the first time we played them,” Krause said. “We’ve improved so much and our energy was so good. They just hit it where we weren’t at the end.”

RCC received most of its hitting from Sydney Taylor of Lanesboro, Camryn McQuery and Austin grad Joy Deng also had some big kills and blocks as well.

Krause and McQuery, a sophomore from Waseca, have both played huge roles in turning RCC’s volleyball program around after the Blue Devils had won just a handful of matches in the previous five seasons before last year.

“Playing games like this just makes us more competitive. We’re just trying to get better every day,” McQuery said.