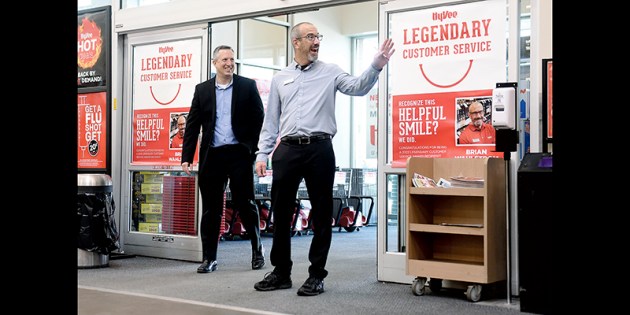 Brian Wahlstrom waves to family as he walks into Hy-Vee Friday morning and surprised with the Legendary Customer Service Award. With Wahlstrom is District Store Director Tony Fuhrmeister. Eric Johnson/photodesk@austindailyherald.com 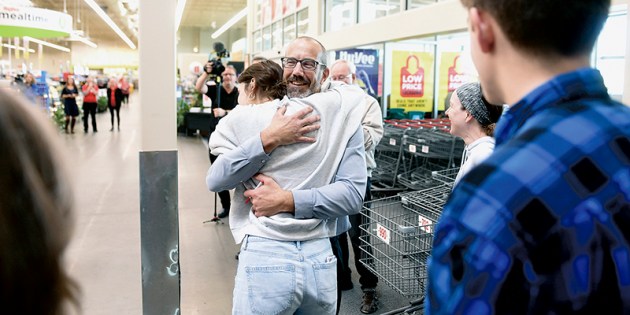 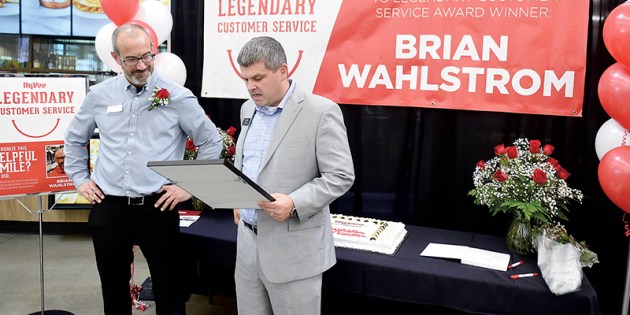 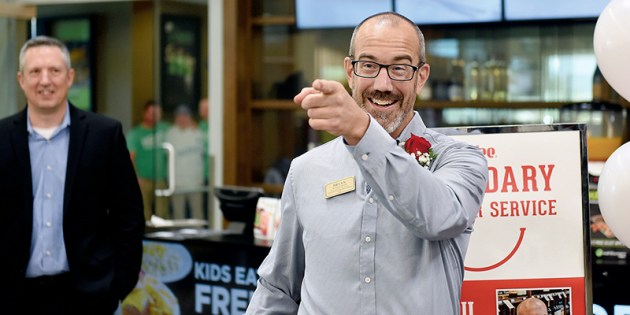 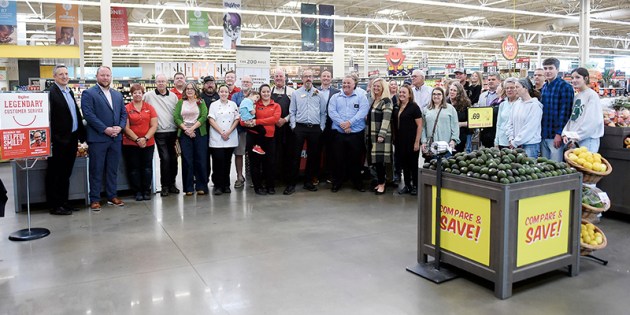 Brian Wahlstrom is a familiar face — not only in the Austin Hy-Vee Wine & Spirits he manages, but the store as a whole.

Easy to smile, Wahlstrom is known for greeting customers almost as if he’s known them his entire life and in some instances that’s probably true.

It’s because of that kind of dedication and customer service that Wahlstrom was awarded the company’s highest employee recognition — the Legendary Customer Service Award — Friday morning during a surprise announcement at the store.

“Complete surprise. I had no idea,” Wahlstrom said. “I knew something was up, but I had no idea it had anything to do with me until I walked in and of course, I saw the pictures on the door.”

The Legendary Customer Service Award is handed out each year to only a handful of the over 80,000 Hy-Vee employs company wide. This year, there were 15 and since the awards inception in 2006 there have only been 150 employees to win the award.

Smillie said Wahlstrom is indicative of how the store views customer service and pointed to a story where Wahlstrom tracked down a Chinese sipping wine for a Hormel Foods CEO, who was hosting a Chinese diplomat.

“Brian  is really unique in the fact that he just cares what the customer is always thinking,” Smillie said. “He can stand back and think, ‘would the customer like this or not?’”

Smillie went on to say that Wahlstrom is a role model other employees can look up to.

“If I could have everybody shadow him for a week, every employee would be that much better,” he said. “Just the way he thinks things through, the way he talks … he’s just always polite, always saying ‘hi’ to everybody and that’s what we’re instilling.”

District Vice President for Northeast Iowa Lucas Glasgow has known Wahlstrom for a number of years and said that the award was well deserved.

“Honestly, he’s probably five or six years overdue,” Glasgow said. “It’s the highest honor that our company gives out every year. As a company we stand on the basis of customer service, friendliness and there’s really none better  than Brian in my opinion. He represents all of that.”

Glasgow went on to say that Wahlstrom and the others who win the award are seen as models for the company that help encourage other members at their store.

“I think it’s important because as a company you want to recognize what you expect,” he said. “When you recognize 10-12 people out of 80,000 employees; that’s a very small percentage. When you are able to show those people they are the best of the best in customer service, the goal is it makes other people want to do better so they can be one of those 10 every year.

Wahlstrom, who was greeted by family and  co-workers upon entering the store Friday, said the customer service is at the center of everything they do.

In other words, it’s more than just a sale.

“It’s almost become a way of life. That’s what we do,” Wahlstrom said. “One of my old sales reps said, people buy from people they like. To make things easy stay friendly, try and spread that to your staff. That’s what it’s all about.”