Leadership movement: Rebels are hoping to continue growth after a big roster turnaround 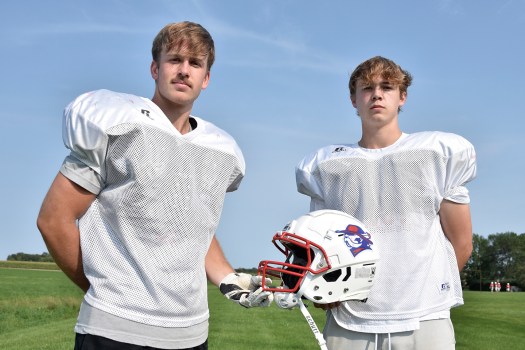 Southland’s Isaac Felten, left, and Noah Bauer have been huge leaders for the Rebels this season. Rocky Hulne/sports@austindailyherald.com 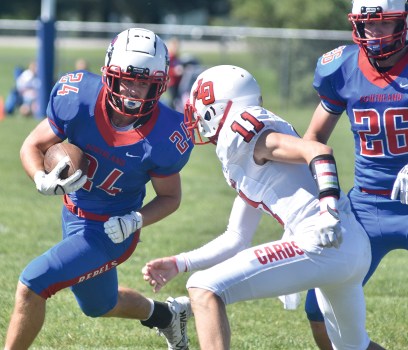 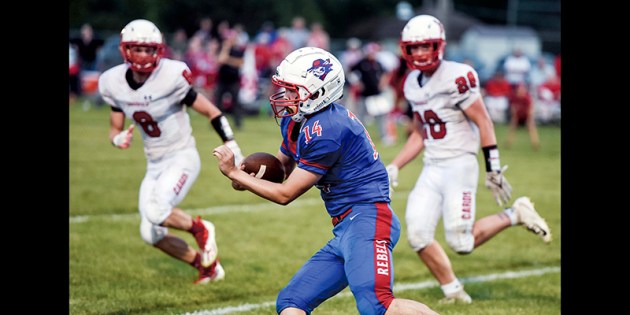 ADAMS – If you glance through the Section 1 nine man football standings and see Southland at the bottom of the standings with an 0-2 record, you’d better think twice before you count the Rebels out.

The Rebels held halftime leads in losses to defending nine man champion LeRoy-Ostrander and Section 1 leader Lanesboro, but they weren’t able to hang on in either contest. For a team that is turning to a lot of new leaders this season, Southland head coach JJ Galle sees a big opportunity for improvement over these next few weeks.

After what he dubbed a “nightmare” preseason scrimmage for the Rebels, Galle has seen senior quarterback Noah Bauer and senior running back and linebacker Isaac Felten mature quickly as they’ve driven their teammates to new heights.

“We’ve come so far and they’re ready to fight. Now we’ve just got to finish a game. We have so many guys who haven’t had to be the guy on a team that have to step up,” Galle said. “This year I kind of challenged (Isaac) as being the top dog. He had to take the reins and just go with it. Right away, you could tell he was forcing himself out of his comfort zone and he’s been the cornerstone of our leadership team. Noah’s got a ton of energy and a great attitude and when he’s flying high, we can do anything just with his emotion. He’s super excitable and it’s been awesome.”

Bauer has had a football in his hand since he was four years old as his father Mike Bauer, a former Austin Packer, had him in the backyard playing catch. Since then, Bauer has committed himself to getting better each day and playing with a fire that inspires all of his teammates to pick it up.

Bauer is a bit undersized, but it doesn’t stop him from being a dual threat quarterback.

“I’m giving it my all every day in practice and in games. I give my all for all of these guys, who are working hard,” Bauer said. “The line is working their butts off, so I’ve got to give them what I can, whether that means scrambling out or stepping up in the practice. I do whatever I can to help these guys, because they do a lot for me.”

Felten, who also plays baseball and basketball for the Rebels, missed his sophomore season with a broken ankle so he knows what it’s like to be stuck on the sidelines during games. He’s now making his time count with his ability and his voice.

“I’ve just got to use my speed, because there’s a lot of big guys who try to block and tackle me on offense and defense,” Felten said. “The older guys ahead of me were all really good and I just wanted to follow in their path and try to be part of the Southland tradition. We want to put some Ws on the board.”

Southland will try to score its first win of the season when it plays at Kingsland at 7 p.m. Friday. No matter what happens, Bauer, who also plays basketball for the Rebels, will be making every second count.

“Not everyone gets to play high school sports,” Bauer said. “I’m very thankful for the opportunity, I’m having fun doing it and it’s great to be out here with these guys every day.”