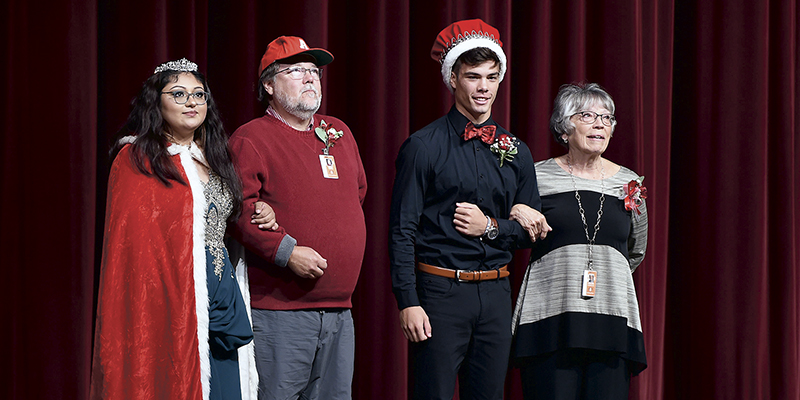 On Thursday morning, Austin High School honored its 20th induction of Distinguished Alumni, following the coronation and the crowning of this year’s Homecoming King and Queen — Tommy Fritz and Wendy Palma.

While Nybo had a career in the United States Army and held several jobs including his family farm, the YWCA and Austin Utilities, it was his contribution to the youth of Austin that truly marked Nybo’s contributions to Austin.

It was Nybo who conceived of the idea of The Tower, a teen hang-out above the old George’s Pizza location that was open in downtown Austin from 1957-1971. According to Linda Nybo Lenz, Nybo’s daughter who accepted the honor on behalf of her late father, the idea found its roots out of concerns for her and her sister.

“He was looking around Austin — what is there to do in town?” she said. “What would his girls be doing?”

Out of those concerns, The Tower was opened and provided his daughters and other teens that outlet — but with strict rules. Among those rules were no swearing, no fighting and no drinking. All of these violations could result in temporary or permanent expulsion from The Tower premises.

Lenz reiterated, however, how life-changing The Tower had been, not only for Austin, but for himself as well.

“The 14 years it was in operation were the best years of my life,” Nybo said, reading her father’s own words to the student body. She went on to say that the recognition from the teens who frequented the establishment meant everything.

Again, Nybo read of her father’s words: “They never failed to say ‘thanks Clarence.’”

A self-described introvert in high school, Bailey went through his time at Austin High School without joining a single activity. No sports, no music — nothing. However, Bailey came out of his time at AHS having seen the dedication of the teachers who walked the halls.

That transitioned to his own esteemed time teaching mathematics. Not only did he teach, but he also garnered honors from his teaching. Outside of the classroom, he is part of the non-profit Rick’s Bike Sales, which takes older bikes and then refurbishes them for kids and older adults.

During Thursday’s event, he pushed students to take an active role in their communities.

He also had words for the teachers that come to work each day with the mission of engaging their students.

“The environment is ever more challenging,” he said. “I honor each and everyone of you.”

At the same time, he asked the students to evaluate themselves with some instruction on what to do with their opportunities.

“What’s your job right here today?” he asked, before saying: “Your job right now, at this age … keep every possible door open.”

At its base though, his advice for students required them to simply be kind.

“Just be the kid who can get along,” he said, before ending with one final bit of advice. “And use your turn signal. It’s not that hard.”