What to know about the monkeypox outbreak in Minn. 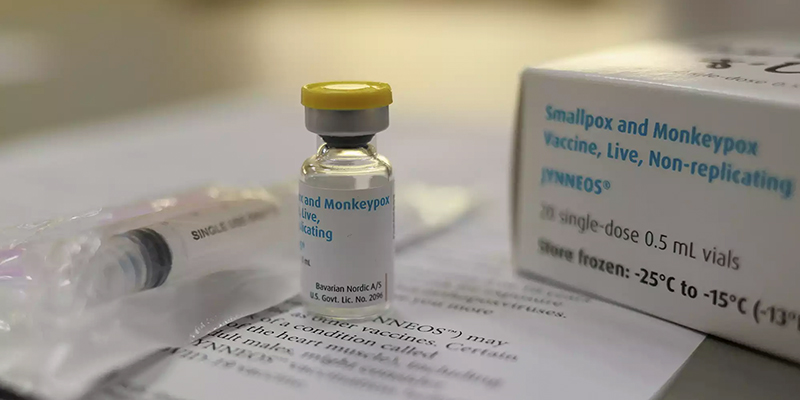 A vial of the Jynneos monkeypox vaccine sits on a table at a pop-up vaccination at Hennepin County’s Public Health Clinic (Red Door) in Minn., on Aug. 4. Kerem Yücel/MPR News

The U.S. is now reporting more than 14,000 cases of monkeypox nationwide. While larger states like Illinois, California and New York are seeing some of the highest numbers, Minnesota is also seeing its cases rise.

Here are some commonly-asked questions about the virus, answered:

Monkeypox is a virus. It’s part of the same family of viruses as smallpox, but generally has milder symptoms and is rarely fatal.

According to the Centers for Disease Control and Prevention, monkeypox was discovered in 1958 “when two outbreaks of a pox-like disease occurred in colonies of monkeys kept for research.”

What are the symptoms of monkeypox?

The most visible symptom of monkeypox is typically a rash that can resemble pimples or blisters. Other symptoms include a fever, chills, exhaustion and muscle aches.

It’s possible that someone who has contracted monkeypox will have all of these symptoms, or just a few. The illness can last from 2-4 weeks, according to state epidemiologist Dr. Ruth Lynfield.

How is monkeypox spread?

“Monkeypox doesn’t spread like COVID or influenza,” Lynfield said. “It typically spreads through close skin-to-skin contact, or prolonged, direct and close face-to-face contact, such as which occurs during sex, or potentially [within] a household.”

Anyone can get monkeypox. Officials say that a majority of cases in the state were transmitted through sexual contact, however the virus can also spread if a person uses the same bed sheets as an infected person.

Can I get monkeypox from riding public transit?

Most likely not. State health officials say you’re unlikely to contract the virus from casual contact: like touching door knobs or handles, riding a bus or sitting across from someone.

“While we need to acknowledge that we don’t know all we want to know about the virus, I can say based on what we know at this point, it is very unlikely that Minnesotans would get monkeypox from just being out in public or casually interacting with people,” Lynfield said.

For certain activities, like some sports, state officials say they’re currently working on guidance, both for K-12 students and higher education. But officials also noted that monkeypox usually transmits through prolonged contact, not the casual contact common in most sports.

I think I have monkeypox, what should I do?

If you have a new rash, sores or bumps, first contact your health care provider. If you don’t have one, the state recommends you reach out to a local clinic/provider offering STI testing. You can find more on that here.

State officials say that testing is not in short supply, but that only those with a rash should be tested, as the test involves swabbing the lesions.

“People who become infected can take a number of measures to prevent spread, such as staying home, avoiding intimate and close contact, covering lesions, and wearing a mask if they need to be in contact with others,” Lynfield said. “Clothing and linen should not be shared.”

Can my pet get monkeypox?

Yes, it’s possible that people who have the virus can spread it to pets, according to the CDC. Similarly to how it spreads among people, pets can contract the virus “through close contact, including petting, cuddling, hugging, kissing, licking, sharing sleeping areas, and sharing food.”

If you have monkeypox, the CDC recommends having someone else — like a friend or relative — take care of the animal while you fully recover.

If you think your pet has contracted the virus, contact your veterinarian. Some potential symptoms in pets could include: lethargy, lack of appetite, coughing, and pox-like skin lesions or rash.

More information is available from the CDC here.

How many cases have been confirmed in Minnesota?

As of Aug. 18, MDH has confirmed 87 cases of monkeypox statewide. Officials said in a recent press conference that all of these cases were among adults, ranging in age from 22 to 61. While a majority of cases were among men, five women in the state also have contracted the virus.

You can find the latest numbers here.

Who is eligible for the vaccine?

Minnesota currently has 6,000 vials of the vaccine and is expecting more in the coming weeks. According to officials, each vial contains several vaccine doses – according to new guidance from the Food and Drug Administration.

The state lists eligibility criteria for the vaccine online, but it’s not entirely straightforward. That’s in part because state officials say they want to ensure those who are most vulnerable have access to the vaccine, and in order to allow providers to use their best judgment.

“We really do look to our providers in the state, and our clinics who know their patient population best, to reach them,” said Jennifer Heath, a supervisor in MDH’s vaccine preventable disease section. “And so there are provisions for providers to be able to make clinical judgments about who might need the monkeypox vaccine. And those clinical judgments might include people who are experiencing homelessness, people who are incarcerated, or other specific scenarios that might come up.”