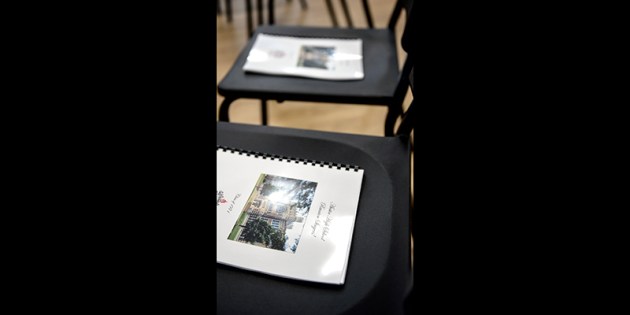 Booklets for the Reunion Singers way for their owners in the choir room of Austin High School. Eric Johnson/photodesk@austindailyherald.com 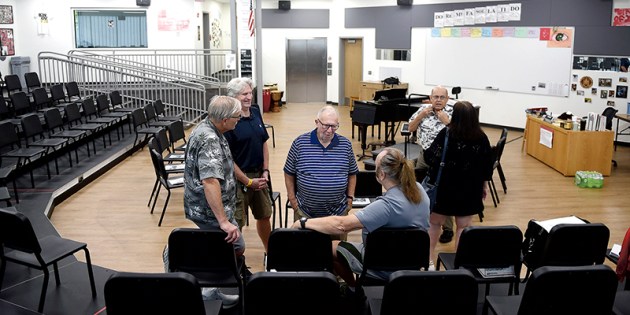 Richard Larson, center, talks with member’s of the Class of 1971 as they begin rolling in for a reunion rehearsal of singing last Friday in the Austin choir room. Eric Johnson/photodesk@austindailyherald.om 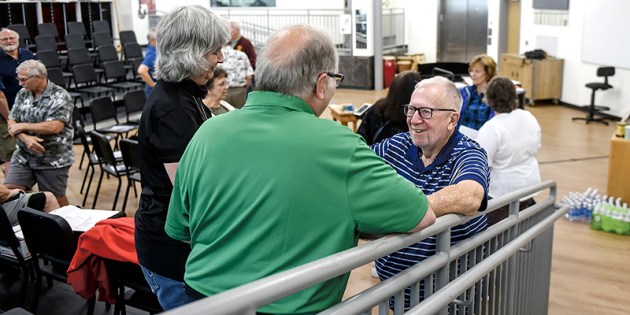 Richard Larson and members of the Class of 1971 socialize before sitting down and rehearsing for a special show that took place this past Saturday. Eric Johnson/photodesk@austindailyherald.com 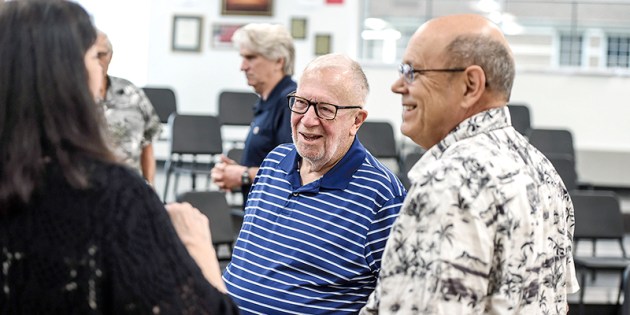 Richard Larson and Dan Malenke (right), of the Class of 1971, talk with other members of the class of 1971 before a rehearsal in the Austin choir room this past Friday. Eric Johnson/photodesk@austindailyherald.com 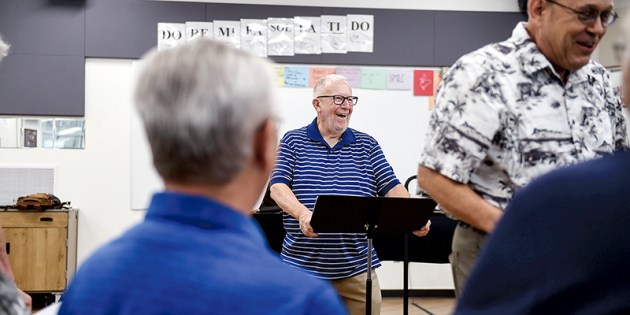 Richard Larson laughs as members of the Class of 1971 arrange themselves for a rehearsal Friday in preparation for a special performance at the class’s reunion this past Saturday. Photos by Eric Johnson/photodesk@austindailyherald.com 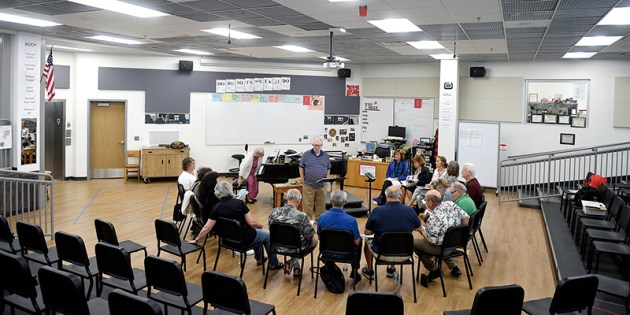 Former Austin High School choral director Richard Larson and members of the Class of 1971 come together in the choir room of Austin High School for a rehearsal this past Friday. The rehearsal was in preparation for a special performance at the class reunion which was held at Austin Country Club on Saturday. Eric Johnson/photodesk@austindailyherald.com 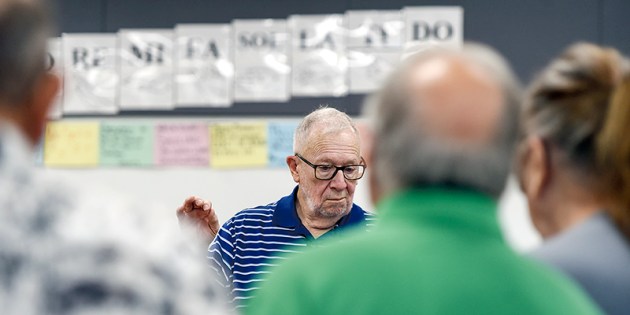 Richard Larson, former choral director at Austin High School, listens for pitch during a rehearsal with members of the Class of 1971 this past Friday in the choir room of Austin High School. Eric Johnson/photodesk@austindailyherald.com 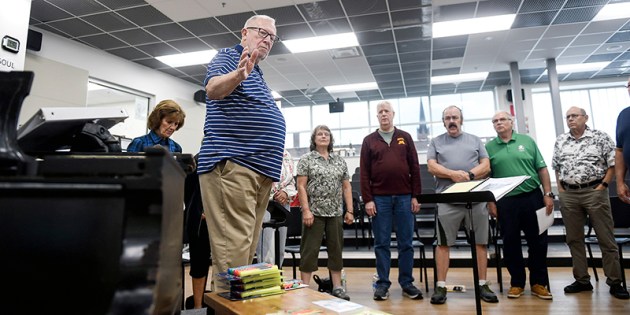 Former Austin High School choir director Richard Larson asks for a note on the piano during a rehearsal with members of the Class of 1971 Friday. Eric Johnson/photodesk@austindailyherald.com 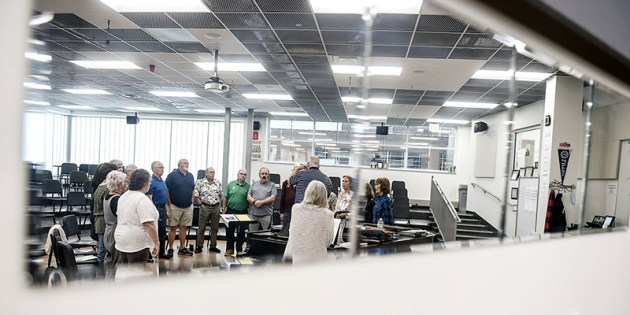 Members of the Class of 1971, along with Richard Larson, rehearse in the choral room of Austin High School Friday afternoon, preparing for a special performance that took place Saturday at the class’ reunion. Eric Johnson/photodesk@austindailyherald.com 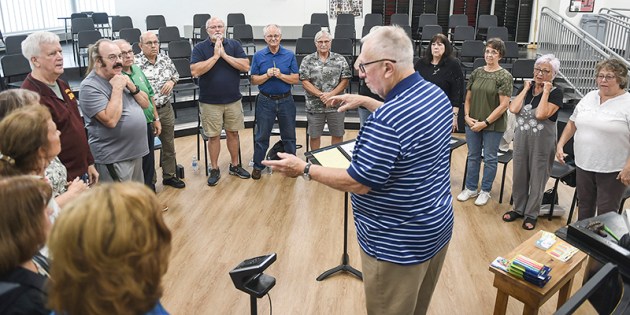 Members of the Austin High School Class of 1971 warm up during a rehearsal for a special performance this past Saturday during a class reunion as well as a reunion with former choral director Richard Larson. Eric Johnson/eric.johnson@austindailyherald.com

We all have that one teacher that stands out from memory. The instructor that in one way or another proved formative for the years ahead.

For many in the music program from the Class of 1971, that teacher was former choir director Dr. Richard Larson, remembered fondly for his dedication to music and devotion to students.

The Class of 1971 was able to relive those memories this past weekend when members of the class came together one more time to sing under Larson’s direction during the class reunion held Saturday at the Austin Country Club.

“Wouldn’t it be cool if we could put together a little choral reunion, together with the class reunion,” mused Dan Malenke, who spearheaded the reunification of students and instructor.

The planning of the special show, made up of eight songs that were sung by these same singers just over 50 years ago, found its earliest notions about six years ago.

At the time, organizers were beginning to plan for the 50th class reunion, which should have happened last year, but was postponed because of the COVID-19 pandemic.

Up until that point it had been at least 40 years since Malenke had even talked with Larson, but once on the phone it was like old times.

“I made a cold call to Colorado and got Dick on the phone,” Malenke said. “He was amazed. We talked for an hour on the phone. In the discussion I boldly asked, ‘would you consider coming back for our reunion?’”

The notion, though boldly asked, was simply answered.

“In that class there were greatly talented students,” Larson said. “I was really excited when I found out how many of the students wanted to come back. I don’t just want a reunion experience like good stuff, bad stuff. I think when we get that downbeat, there has to be some excellence.”

As could be imagined, the scenario began as it might have when Larson’s tenure began at Austin —waiting in the empty confines of the choir room in the Austin High School Annex. As he prepared, his former singers began trickling in, quickly rekindling old memories, both with each other and with Larson himself.

As they came together in a half circle around Larson and accompanist Dori Schou, Larson spoke to them about the two rehearsals ahead of them, but he also echoed an earlier sentiment about the need for something like this performance at this point in history.

“I think our souls — after COVID, after what we’re experiencing in Ukraine — our souls need the arts, the beauty,” Larson had said.

The singers quickly fell into the routine, treating the moment not just as a group of people coming together, hoping to find the perfect pitch. Instead, it was a choir coming together.

“We’re all serious musicians,” Malenke said. “Nobody here is messing around.”

Out of a pool of 45 prospective musicians, Malenke was able to enlist 20 eager musicians looking forward to the experience of reliving a time in Austin’s history when music was the soundtrack of an entire community.

“We’re just having a ball coming together,” Malenke said prior to the event. “We’re really looking for to our time with Dick”

Both Malenke and Larson described those days in Austin as a magical time to be part of the musical scene of the school system.

Larson came to the district in 1966 and stayed until 1982, when he left to take on positions with other school districts outside of the state as well as positions with several major colleges. He also served as a clinician at the Rene Clausen Choral School, owned by former Austin student-teacher under Larson and namesake Rene Clausen.

Eventually, Larson ascended podiums at the highest levels of musical performance, receiving Rockefeller grants and heading the 52-voice Kantorei, which performed at such notable venues as Chicago’s Orchestra Hall, New York’s Carnegie Hall and Avery Fisher Halls and the Vatican.

This urge to reach higher and higher came from an almost religious devotion to his own education.

“My soul needed that,” Larson said, referring to the times every summer for 16 years he pursuing education. “My soul was hungry for that kind of music. When I came back from those things, I was fired up. I could hardly wait to get in front of my group.”

For the singers of 1971 as well as those singing during the years of 1966 to 1982, they were on the forefront of that rise during an especially musical time.

It’s a moment in time Larson remembers fondly. Talent wasn’t limited to choir — it stretched across all music endeavors to create one compact community of music within the halls of Austin High School.

“It was just a wonderful place to be right away,” Larson said, having just come out of graduate school two years before taking the job at Austin. “There were several things that added to it. The choir program was great, the entire music program was really stellar all the way through.”

Larson said he considered the moment life-changing and remembered such moments as Austin choir’s performance in front of 700 students at the Dorian Music Festival at Luther College and at the Minnesota Music Educators conference in Minneapolis.

With honors bestowed upon him, including induction into the Colorado Music Educators Association Hall of Fame, Larson finally retired in November of 2019 as Chancel Choir Director at Augustana Lutheran.

Even today, though, Larson hasn’t lost his vigor for music, which was demonstrated this past weekend during the performance of his former students.

“I still have a burning passion for making music,” he said. “I’m 83 years old and I’m just fired up about what I do.”