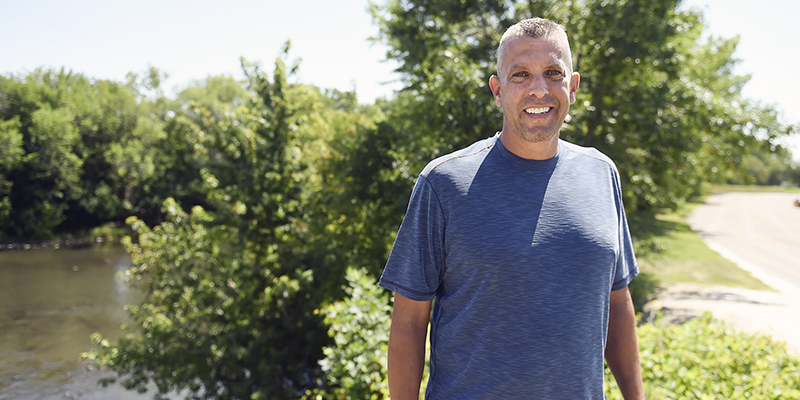 David Merrill is ready to take Parks, Recreation and Foresty to the community as the new director. Eric Johnson/photodesk@austindailyherald.com

New Parks and Rec director throwing himself into Austin

In July of this year, new Parks, Recreation and Forestry Director Dave Merrill walked across the ramps and obstacles at Austin’s skate park, where skaters showed off the problems and areas of safety concern needing to be addressed.

What followed was a meeting as the skaters and families expressed their hopes for overall improvements, with Merrill urging cooperation to get these things done. It was an open window into how Merrill plans to approach his new position.

“Everyone likes something we do,” Merrill said, speaking to the need to listen to everyone’s concerns. “Whether they are a participant or not. Everyone is touched somehow so getting out and figuring out who those people are and what kind of voice they have is very important. I have a long list of mini communities in town that I’m trying to connect with.”

Merrill started his position on May 23, taking over for Kevin Nelson, who left for Mitchell, South Dakota. He comes with a long background of recreation experience, including in a higher education format where he last served as director of Campus Recreation at Northeastern Illinois University.

Prior to that he worked in Iowa as an assistant recreation director.

“I’ve dabbled in several different areas of recreation, but literally every job I’ve had over the last 30 years has in some way been tied to recreation,” Merrill said.

Merrill said this desire has always been led by a love of recreation, realizing early on that it was going to be an important part of his life.

“When I went to college, I went as a pre-med major. I realized at some point I didn’t want to be my doctor so why should I impose on other people to be theirs,” Merrill joked.

That led to a conversation with the head of the intramural program at the school he was attending, who pointed him in a new direction.

“It was kind of history from there,” Merrill said.

The big draw over the years has been working with the people who are a part of recreation, whether that’s employees, officials or participants. But as he continued down the career path, Merrill was also exposed to other areas, including in Austin.

“This job has put me into the world of forestry and park management and those sorts of things I haven’t been involved in before,” Merrill said. “It allows me to do the same sort of interaction with people. I’m just reading from a different script.”

However, there was some providence with this new job as well.

Merrill was in the midst of a national search for jobs outside of the higher education arena, but most positions would have required him to either commute and serve another community or move entirely.

At the same time, Austin’s position popped up and while it still required a move, there was reason for it this time.

“This one popped up and because I have family in Austin, it was like ‘wow,’” Merrill said. “This is kind of a coincidence. This sounds like the thing for me.”

Merrill said his new job seats him in the middle of a prime situation in Austin, which puts a central focus on parks and recreation.

“We have a vast amount of resources when it comes to parks,” Merrill said. “To the point where I feel like we have too much compared to the resources we have to manage it.”

It’s an enthusiastic situation for Merrill to know that resources are there to exact quality and positive change in the community, while at the same time fostering established central cores that have made parks and recreation in Austin so plentiful.

“The people are great. The people that work in my department … I’ve got great people doing a lot of work,” Merrill said. “It’s all about going above and beyond. Everybody is doing more than they’re asked to do, which is fantastic. The potential here is great in terms of things we can improve. There are a lot of cool things we can add to Austin that are either going to augment tourism or the general aesthetics of the community.”

However, the job isn’t without its challenges. One of the biggest is the emergence of the Emerald Ash Borer that was first detected in Mower County a number of years ago, but has now been detected in Austin itself.

The reality is that Austin is facing the loss of a lot of ash trees, which make up a large number of the total trees planted in Austin.

“EAB is unfortunate. But it’s happening. It’s happening everywhere,” Merrill said. “It’s a reality, there is a process. Fortunately, we have the support from the Department of Agriculture.”

“People here care about their trees, trees in parks. They’re important. The only thing we can do is be very prudent in the removal of those trees, and concurrently how are we going to replace them?” he added.

Merrill said he is looking forward to his future with Parks and Rec and hopes for even more community engagement.

“I don’t want to come off as looking for sympathy, but I wish the community could really understand how much of the areas in the community this department touches and how they get things done with the limited people and resources we have,” Merrill said. “We almost never say no to community requests to partner requests and I want to continue being able to do that but we’ve got to keep moving forward with parks and recs in this community.”