‘Our Time’: Hayfield duo is looking to set up a historic run 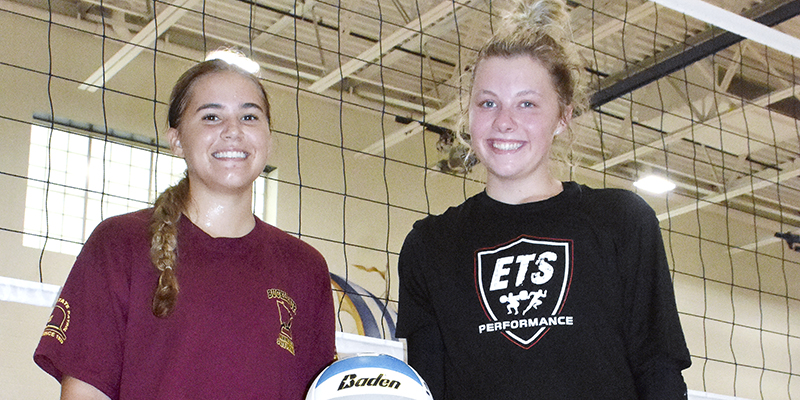 Haeven Skjervem, left, and Reese Baumann are going to give the Viking volleyball team a tough hitting combination up front this fall. The pair have high hopes for the upcoming season. Rocky Hulne/sports@austindailyherald.com

HAYFIELD — Hayfield made headlines last season when its girls basketball team went to the state tournament for the first time since 2008, but two of Hayfield’s best female athletes weren’t even on that team.

Now, senior captains Reese Baumann and Haeven Skjervem have hopes of making a little history of their own with dreams of getting the Vikings to their first ever state volleyball tournament.

The hard hitting duo both play volleyball year round and they aren’t shy about talking about their big goals as they prepare for their final season in blue and gold.

“It’s my main focus. I want to win a state title,” Baumann said. “We definitely have a chance if we can get our defense up to our offense. It’s definitely our time to make it to the state tournament.”

Baumann is a tall, physical hitter at the net, while Skjervem is a versatile, clever attacker. Hayfield head coach Johanna Kruger said they are equally effective in different ways.

“When Reese was an eighth and ninth grader she was kind of long and lanky and she didn’t really have any strength or skills yet. Then she shot up and her skills went through the roof. She has taken over and she reminds me a lot of Maggie Streightiff and Carrie Rutledge. She can take over a set,” Kruger said. “Haeven is just as lethal. She can hit a shot going down the one zone (back right corner). She’s just as effective as Reese, even though she’s four inches shorter.”

Rutledge, who plays volleyball at Division I University of Saint Thomas, and Streightiff, who plays Division II volleyball at Upper Iowa, were on the only Hayfield team to play in a section title game back in 2016. Both players are now in their fifth season of college volleyball.

Baumann had 355 kills last season and Skjervem finished with 399 digs and 181 kills. Both are hoping to get Hayfield back to where it was six years ago — in a Section 1A title game.

“There has been so much success for Hayfield recently with boys basketball, girls basketball, baseball, and softball and we want to do that too,” Sjkervem said. “We need to push each other and never settle. We can’t get down or stay down. We have to keep the energy up.”

Skjervem dealt with an injury this past summer and it forced her to see the game through a spectator’s lens. She was able to learn by watching and Kruger has already seen a big improvement of Skjervem’s awareness.

“With Reese and Haeven, It’s almost like having two more coaches. Haeven has taken her volleyball IQ to the level of us coaches,” Kruger said. “She’s noticing things she never noticed before and she’s telling the freshmen about it. Reese is mentoring Natalie Beaver and Allison Meier in the middle.”

It is rare for a school as small as Hayfield to have specialty athletes who don’t play three sports, but Kruger has seen the benefits of a volleyball focus in her dynamic duo.

“Usually we don’t have girls who just focus on volleyball, but they spend the entire last two years playing club volleyball and it has shown. It has been tremendously good for the,” Kruger said. “It’s kind of time for the girls to get (to state). We played all of the teams in our section in five set matches last year.”