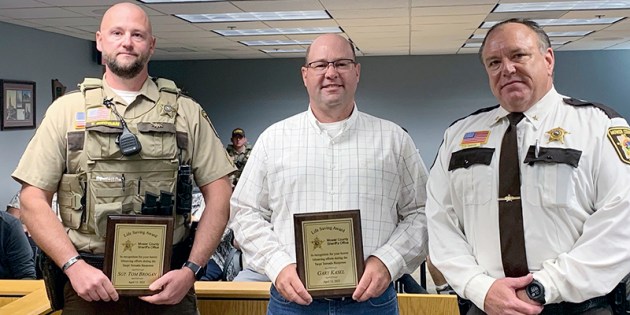 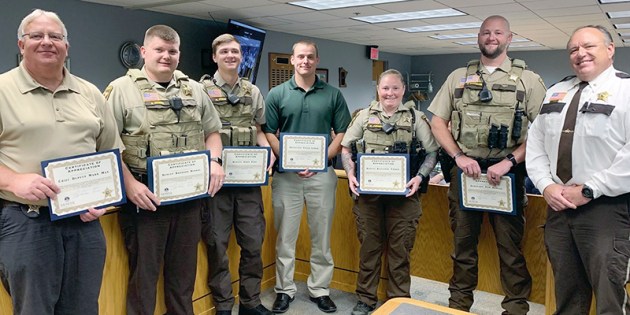 Members of the Mower County Sheriff’s Office were honored for their response during the April 12 storm that struck Taopi. Photo provided 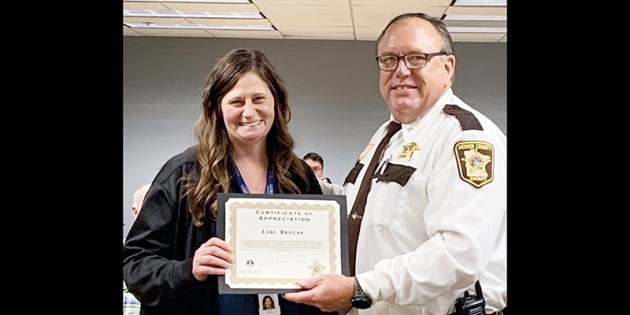 Dispatch supervisor Lori Brogan accepts a Certificate of Appreciation during Tuesday’s Board of Commissioners meeting. Brogen. Three other dispatchers who were working that night were also honored but weren't able to attend Tuesday. Photo provided 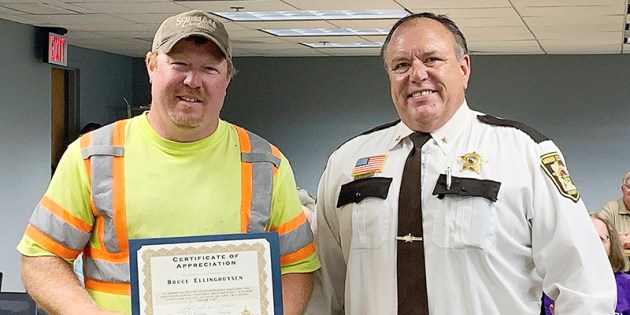 Bruce Ellinghuysen accepts a Certificate of Appreciation. Others in the department were also honored, but were not able to attend Tuesday's event. Photo provided

It’s been just over three months since the EF2 tornado that struck Taopi on April 12 churned through the community.

The storm left half of the town destroyed, but luckily there were very few injuries.

During Tuesday morning’s Board of Commissioners meeting, Sheriff Steve Sandvik recognized those within the county that responded to the storm’s aftermath as well as honoring two of the earliest responders that helped ensure the only injuries were minor ones.

Sandvik recognized Sgt. Tom Brogan of the Mower County Sheriff’s Office and Gary Kasel with life-saving awards for their efforts to rescue Thomas Kasel and Jewel Andree from their ruined home that night.

“It could have been a much different outcome if everything hadn’t fallen into line,” said Sandvik to both of them. “I can’t say enough how impressed I am for your heroism.”

The storm struck Taopi later in the evening on April 12, damaging several structures.

Andree and Thomas were at home when the storm struck; it lifted and pushed the home several feet off its foundation.

Both Andree and Thomas became trapped in teh basement by damage caused to the structure.

Brogan was the first deputy to enter the town, having just been outside of Adams when the first calls started coming in. A video shown by Sandvik during the meeting and taken from Brogan’s dash cam, showed the deputy pulling into Taopi with wind-driven rains still pelting the area.

Eventually, the video showed Brogan’s light coming to rest on the structure. Moments later Gary, who is Thomas’ brother, arrived on the scene and the two of them went on to pull both people from the home.

“They entered the basement of a house that literally could have crumbled in,” Sandvik said. “The two of them were able to extradite Thomas and Jewel. Thankfully both are here today.”

Brogan and Kasel were just two people honored during the presentation by Sandvik, who also recognized employees from dispatch and public works, the latter for their willingness to respond immediately to remove debris to allow emergency vehicles through.

“When the call came out they responded,” Sandvik said.

Dispatch had three people on call that night, Sandvik said. He credited the department with being able to ensure smooth lines of communication and direction during the storm response.

Their job is one of the hardest, if not the hardest,” Sandvik said. “They play the telephone game to make sure which responses were sent. A tremendous job by our dispatch center.”

In May it was reported that damage from the storm came to an estimated $1.576 million. The National Weather Service recorded winds of over 130 mph with the EF2 storm.

Those honored Tuesday for their response during the Taopi tornado.