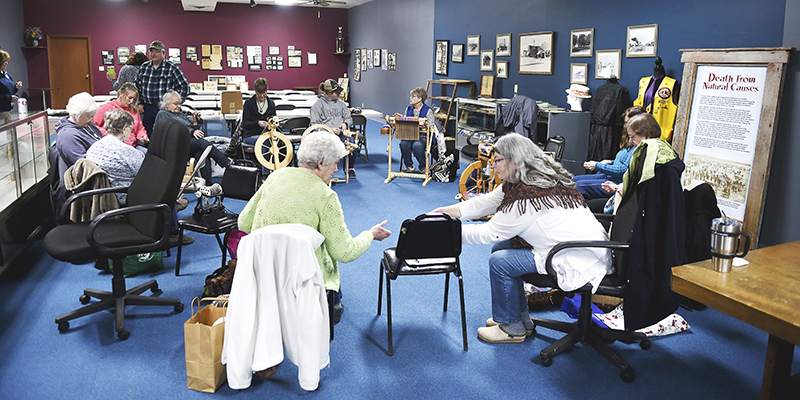 The Twilight Treadlers come together in Lyle in April of this year. The long time group is dedicated to wool spinning, meeting regularly to trade items and share creations. Photos by Eric Johnson/photodesk@austindailyherald.com

There was history being spun on a quiet April Saturday in Lyle.

Gathered in a large circle within Lyle City Hall, among notes and pictures of the community’s long history, were the Twilight Treadlers, a club dedicated to the ancient art of wool spinning.

Spinning can take on many aspects and many techniques, all of them hightlighted by the Twilight Treadlers. Eric Johnson/photodesk@austindailyherald.com

Over 10 spinners were in attendance on this day, their wheels of varying complexity and technology pulling and twisting the fabrics and fibers from a variety of sources.

Wool spinning is one of the oldest arts known to man. According to the National Museum of American History, spinning wheels are thought to have originated in India between the years of 500 and 1,000 AD.

While little of that history was on ready display in Lyle, the art as many would have recognized it was. Members of the Treadlers worked over the spinning wheels that encompassed designs those in the 1800s might have found familiar as well as modern wheels that were a fraction of the size. 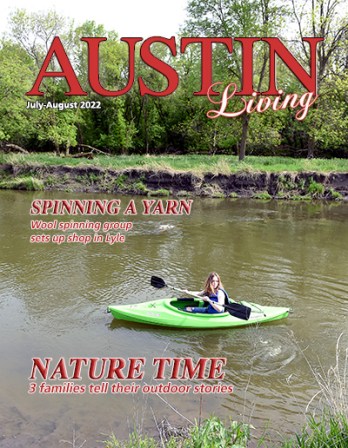 Either way, the social aspect of the club was on display. Members traded ideas, talked of fibers and in the kitchen the scents of the days potluck meal could be smelled drifting throughout the meeting hall.

“We have a lot of fun,” Sunderman said. “To me it’s a pleasure to meet everybody every month as we only get together once every month and we catch up with each other. To me it’s food, fun and company.”

Sunderman has been spinning wool for 35 years, starting with a community education class in Rochester. She wound up renting her first wheel and through the process of renting came to own it.

It was during that same time that the instructor of the class invited her to become part of a spinners guild.

She hasn’t looked back and has been part of the Treadlers as they grew from a small group based out of Dodge Center to the larger group it is now, which draws people from all over southeastern Minnesota and northeastern Iowa.

The club itself has drifted throughout the area, largely setting up shop in homes, but as the group grew so did the need to find a larger space.

Eventually, the club came to settle in Lyle. In turn, the larger meeting spaced opened up a larger period of time to spin, most often taking place once a month between 10 a.m. and 4 p.m.

Jennifer Murphy works her spinning wheel during a meeting of the Twilight Treadlers in Lyle.
Eric Johnson/photodesk@austindailyherald.com

“We wanted more time to visit, catch up with each other, share our projects — show-and-tell — spin and help new people,” Sunderman said. “We just really enjoy each other and our craft.”

If you were walking down the street of Lyle and happened to step into one of the group’s spinning sessions, a group enjoying themselves would be the first thing you would see. And in general terms you might also make note of spinning itself, but a deeper look reveals a rich variety to the spinning.

Multiple techniques can spin a multitude of different fibers from a variety of sources. Sheep, llamas, and alpaca are perhaps the most familiar, but it’s really just the tip of the iceberg.

Spinning can also make use of angora rabbit fur, corn silk and soybean silk. The wool can be blended, twisted in different ways and used for a variety of materials that are in turn crafted through still more ways into different projects.

Entwined through all of this is the art of spinning itself.

“There’s different ways of spinning,” said Iowa member Louise Philipp as she opened a book filled with examples of weaves and blends. “You can see how loose that is coming together and then there is one where you’ve done thick and thin. There’s also a chain where you put two that are plied together. There’s all kinds of different styles you can do to make yarn.”

However, the one thing spinning isn’t it’s that it’s easy. It’s an art form that challenges, but once someone picks it up it’s like any other craft.

“I’ve finally learned to tell people it’s like riding a bike,” Philipp said. “That initial learning is frustrating. It breaks, it does this, it does that, but once you get the feel you don’t think about it after that. In fact, it gets hard to deviate from that.”

The group itself is made up for spinners of all levels, which in part is what makes being part of the Treadlers so fun.

It’s that opportunity to come together and talk about projects at those different levels that becomes so fun and interesting.

On this particular Saturday there was a newcomer to the group that had plenty of wool but no experience. The long-time members were eager to show her the ropes amid a certain amount of caution as to how much fun this new member would have.

“She has all of this fiber and she does not know what she’s doing or doesn’t have a clue how much fun she can get into,” Sunderman said with a devilish grin. “It’s fun to gather around her and help her out and get her going.”

And underneath it all, that might be the most alluring part of this spinning group. Yes, all of the members are passionate about spinning, with some having more than one spinning wheel.

After all the spinning keeps the group going around, but it can’t be overlooked how much the social aspect means to its members either.

“That’s why we meet,” Philipp said. “So we inspire each other to try these new things we haven’t done before.”