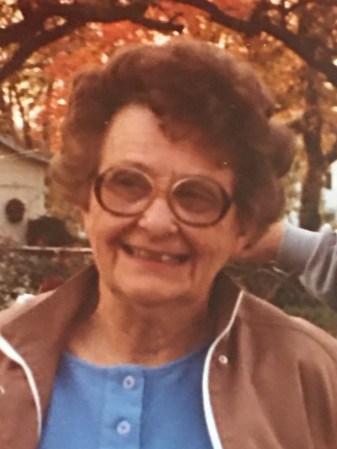 Agnes was born July 6, 1919 in Freeborn, Minnesota to Mathew and Gertrude (Chicos) Paczkowski. She began her education at St. Theodore’s Catholic School and graduated from Albert Lea High School in 1936. After graduation, Agnes worked in the office of Wilson Meat Packing for nine years.

Agnes met John Capp on a Saturday night at the Terp Ballroom in Austin. They were married at Our Lady of Perpetual Help in Brooklyn, New York on March 26, 1945. While in Brooklyn, Agnes worked for the Point of Embarkation Office until John was honorably discharged from the Navy in September of 1945.

After her children were raised, Agnes worked at Ellis Junior High School in Austin in the guidance counselor office. She worked there for seventeen years.

In retirement, Agnes and John did a lot of traveling throughout the United States.

A Memorial Mass will be celebrated 10:30 am on Saturday, June 25, 2022 at St. Augustine Catholic Church with Father James Steffes officiating. Friends may call from 5-7 pm on Friday, June 24 at Mayer Funeral Home and also one hour before the mass at the church. Interment will be in Calvary Cemetery.