Schammel is finishing strong as Packers down Cotter 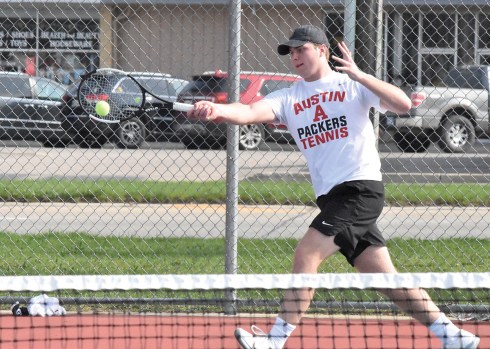 Austin’s No. 1 singles player Joey Schammel makes a play on the ball in one of his final home matches with the Packers on Monday. Rocky Hulne/sports@austindailyherald.com 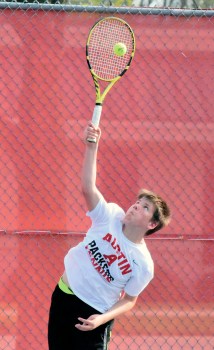 Cole Hebrink makes a play on the ball for the Packers. Rocky Hulne/sports@austindailyherald.com 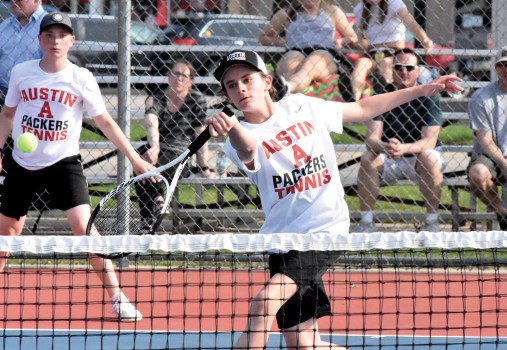 Austin senior Joey Schammel has played tennis in a lot of conditions in his time with the Packers, but he faced a unique challenge when the Packers beat Winona Cotter 4-3 in Paulson Courts Monday.

Schammel had to deal with high winds and high temperatures, which caused him a little trouble with his serving. Schammel overcame that obstacle as he beat WC’s top player John Besek by scores of 6-2, 6-0.

“When you’re hitting serves at 120 miles per hour, you want it in your strike zone. It’s tough when it doesn’t go exactly where you want it to go, but I was able to adjust,” Schammel said. “I’ve got to protect my serve and when I’m serving, I feel like I can beat anyone in a tiebreaker.”

Schammel is now 8-3 overall at No. 1 singles in his fifth year as a varsity player. He has plans to play club tennis at the University of Minnesota next year, but Schammel is still embracing his final couple of weeks as a Packer.

The Packers (3-7 overall) will play in the Big Nine meet in Rochester this weekend and they will begin section tournament play next week.

“It’s kind of crazy that it’s almost over,” Schammel said. “I’ve played on this team for five years and it’s great to see all of the young guys that are progressing for the future. Hopefully we can have some success in the playoffs.”

Austin won three of the four singles matches at the No. 3 doubles team of Marcos Castro and Laythan Stenzel won 6-1, 6-3.

“Marcos Castro and Laython Stenzel played together for the first time today and played some really good doubles,” Austin head coach Jeff Anderson said. “Cole Hebrink came through with the match on the line to win his match and secure the team win. Joey Schammel continues to play at a very high level.”