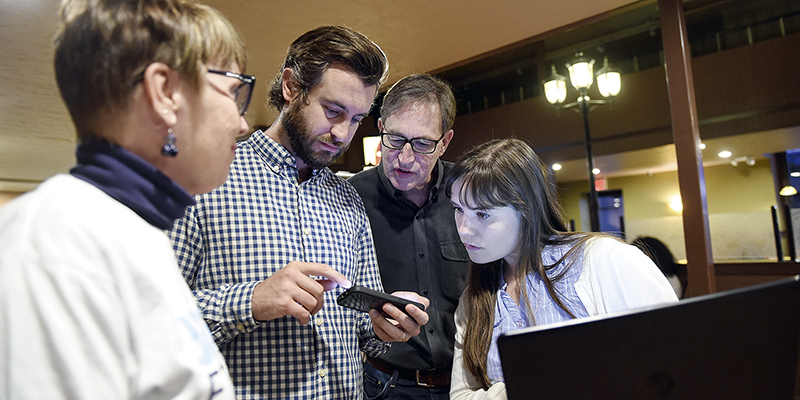 Editor’s note: This story will differ from the print version due to press constraints.

The Associated Press contributed to this story.

Former Hormel CEO Jeff Ettinger has claimed the Democratic nod in the special primary for the 1st District seat left vacant by the untimely passing of Rep. Jim Hagedorn earlier this year.

“I’m honored and proud to have earned the support of southern Minnesota voters today,” Ettinger said in a press release not long after he was deemed the winner Tuesday night.

That includes Mower County, where Ettinger was the clear winner with just over 90% (1,808 ) of the vote. Nobody else in the crowded field broke 100 votes.

“It’s just fantastic,” Ettinger said after he confirmed the county results Tuesday night at Steve’s Pizza. “Ever since I’ve declared for the election, everywhere I go in town people reach out with good wishes. It’s just been an exciting base for me.”

“I’ve had a great chance to be all over the district as well,” he continued. “I’ve traveled from Luverne to La Crescent and everywhere in between, but Austin is obviously my home and it’s very special to have such good turnout tonight.”

Things remained tight on the Republican side of things with Jeremy Munson and Brad Finstad as of this morning.

“I am honored to have the backing of voters across Southern Minnesota. Tonight’s victory is a victory for our Southern Minnesota values,” Finstad said in a press release. “The race in this special election will provide a clear contrast. I promise to fight the extreme Biden and Pelosi agenda that is devastating our families.”

Finstad won Mower County with 638 votes to Munson’s 548. While still close, the margin is well outside of the .25% margin that would merit a recount.

“I guess I’m probably in the same boat,” Ettinger said Wednesday morning when looking at how close the Republican race remains. “Seems like [Finstad] has a 300, 400 vote lead, pretty close. It’s above the limit for an automatic recount, but who who knows.”

However, Ettinger is now poised to look forward, regardless of who officially comes out of the Republican race.

“When you look at their campaign literature for both, both call themselves conservative fighters. There are two things you can take out of that,” he observed. “One, I think we have a balanced district and they are eager to serve conservatives. Second, I don’t think we need more fighters in Congress. We need to lower the temperature.”

Ettinger said he hopes to carry this momentum through to the special election on Aug. 9, by once again vying for the trust of voters like he did in Tuesday’s win.

“It’s how we won tonight, and it’s how we’ll win in August and November,” Ettinger said. “Congress has been unable to set aside the partisan bickering and deliver results for regular people. The last thing our district needs is another career politician who will lead with divisiveness and put their own ambitions ahead of the people of our district.”

“I think it was really gratifying seeing the unified support,” Ettinger said. “I think I ended up winning every county —I might be missing a few. It was a broad victory that gives me some momentum into August.”

The process that will follow Tuesday’s primary is complicated. The winners will run in an Aug. 9 special general election that coincides with Minnesota’s statewide primary the same day.

The winner of the special general election, who will fill out the rest of Hagedorn’s term into January, presumably will also win the district’s regular primary that same day. That should give him or her an advantage heading into the November general election, which will determine who holds the seat in the next Congress.