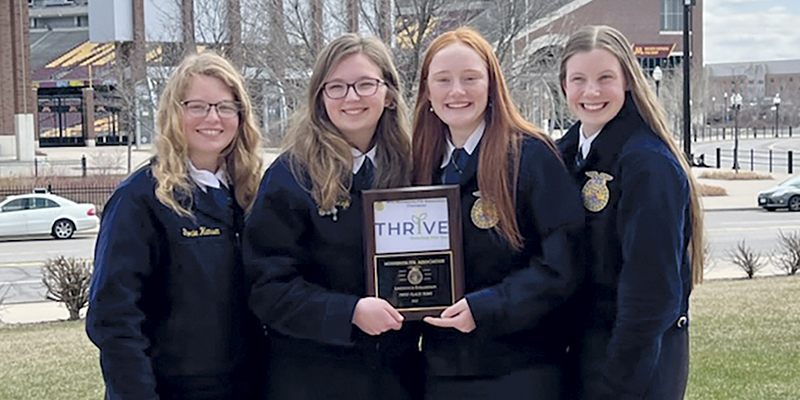 Sometimes it’s not about the competitive journey, but how you finish.

That’s what members of the Austin High School FFA Club discovered earlier this month when a pair of teams finished the year strong at the state level.

The general livestock judging team, consisting of Abby VanPelt, Gloria Hansen, Riley Hetzel and Cassidy Shute rebounded from a seventh place finish in the Region 8 competition to claim the title at the state competition.

Just had to practice

The livestock judging foursome showed immediately after the region competition what it takes to win a title.

Don’t finish the way you want? Head back to the drawing board.

Despite the disappointing region finish, the girls turned right around began practicing all over again.

“We knew it wasn’t one of our best [competitions] and we definitely knew we could do better,” Shute said. “A lot of the teams we beat were teams we lost to in the regions.”

Livestock judging isn’t so simple as looking at an animal to gauge its features. In fact, that’s only part of it.

All four team members judge the same animal and then independently come as close in their judging as possible to each other. In that way it’s simultaneously an individual as well as a team competition.

“It shows you know what you are talking about Abby VanPelt said. “The closer you are the better. Our coach, John Carroll, always said you fly together, you die together.”

All of that paid off for the state competition.

“We had high hopes that they would compete and do very well,” said co-advisor Nick Schiltz. “They were pleased with how things came together and we knew they placed really high.”

Even though they started to realize where they were going to place, the team was still somewhat taken back by the finish.

“We were all kind of shocked,” Hetzel said. “We came together during that time between region and state.”

The team’s work isn’t done yet, however. The four of them have five months now to prepare for the national competition on Oct. 27-29.

“It’s an incredible achievement,” Schiltz said. “They are highly determined, focused and put in the hard work. I want to credit John Carroll, parents and students in getting them where they are today.”

The ag mechanics team may not have finished as high at the state competition, but that doesn’t make them any less proud of the work they put into a very difficult competition.

Ag mechanics is exactly what it sounds like. The team must show proficiency in a sprawling amount of areas that span small engine repair, welding and electrical, among so many more.

“It’s a very broad, very difficult contest,” Schiltz said. “You have to show proficiency in just about everything.”

“I’m really proud of the work they put into it, said Ryan VanPelt about his team. “It goes back to effort.”

“I think we did really good,” he later said. “It shows you have a lot of motivation.”

The team is especially happy coming out of two years of not being able to put their skills on the line. Two years ago the event was canceled all together because of COVID-19 and last year it was done over teleconferencing, which can be challenging on video when demonstrating skills such as welding.

Still, fourth place is nothing to look down one’s nose over and the team came away with several other important treasurers, including spending time together on their own projects.

“It’s good to get all back together this year,” Sayles said. “Not only is it a competition, but it’s the friends you meet just as much.”

At the same time, this also provides something to stand on for the future.

“I think this really helps provide a starting foundation for the team going forward,” said Blake VanPelt. “It helps bring in new people who look at what you can achieve when you work hard.” 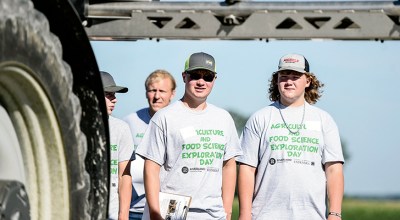 3 honored for induction into AHS Music Hall of…