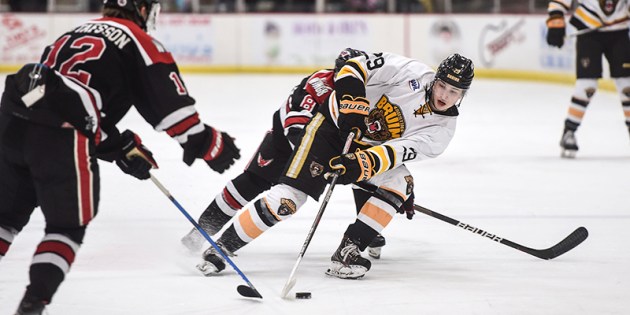 Austin’s Jens Richards tries to hold control of the puck during the second period against the Aberdeen Wings on April 8 at Riverside Arena. Herald file photo 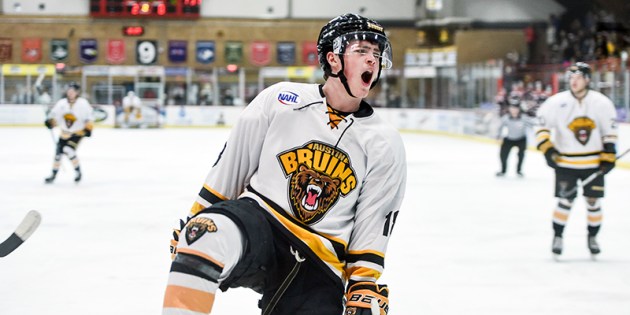 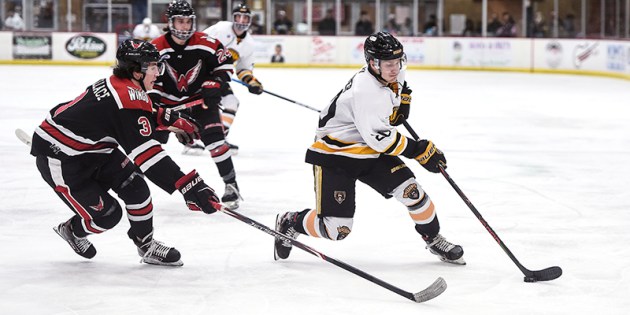 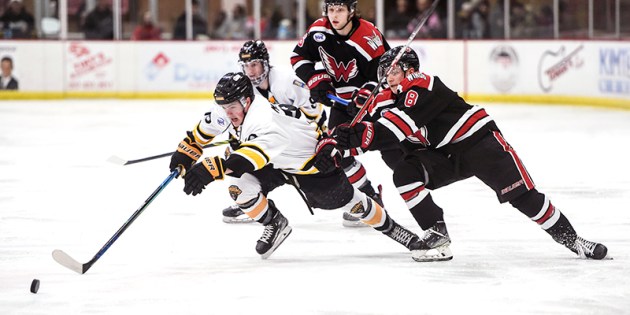 The Bruins Anthony Menghini reaches for the puck against the Aberdeen Wings on April 8 at Riverside Arena. Herald file photo 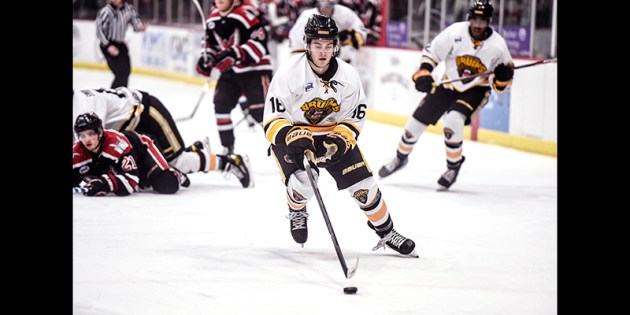 Austin’s Therian Thiesing picks up the puck on April 8 against the Aberdeen Wings at Riverside Arena. Herald file photo

The Austin Bruins chased some old ghosts out of Riverside Arena when they earned their way back into the postseason after a two-year drought with a 3-0 win over the Aberdeen Wings Friday.

The Bruins barely missed the playoffs last year and they would have made the playoffs in the 2019-2020 season, but COVID-19 put a premature end to that season.

Austin was led by a pair of rookies in the win as Anthony Menghini scored two goals and Klayton Knapp scored his second shutout of the season.

Menhini and Knapp have been crucial to Austin’s postseason push throughout the last month.

“You can’t say enough about Knapper and what he’s done and back there. He’s playing good hockey and we’re excited for him,” Austin head coach Steve Howard said. “Anthony’s been scoring some huge goals for us lately.”

After taking a 1-0 lead on a power play goal by Jens Richards, the Bruins (29-23-2-3 overall) turned a negative into a positive when Menghini took a clean swipe from Aberdeen before gliding through for a shorthanded goal that made it 2-0 Austin.

Menghini, who is from Brainerd, has been a huge addition for the Bruins as he now has 18 goals and nine assists in just 35 games.

“We’ve all been working hard in practice and it’s been a lot of fun,” Menghini said. “It’s great to get to the playoffs.”

Knapp was sturdy between the pipes all night as he finished with 25 saves. He is now 15-13-0-1 overall on the season.

“You have to stay focused back there,” Knapp said. “What a great team game. Guys came back hard to find and block shots. We were able to get three past their goalie, who had a really good game of his own.”

Austin (30-22-3-2 overall) has three games remaining in the regular season and it will have home ice advantage in the first round of the NAHL Central Division Playoffs if it can win two of those games. The Bruins currently trail third place Aberdeen by two points and their final three regular season games are against each other.

If they meet in the playoffs, which is very probable, the Wings and Bruins will be very familiar with each other.

“I mean obviously punching their ticket was with the motivation for tonight but now we look ahead to we’ve got to win two of the next three to get to second seed and be at home,” Howard said. “ We’re probably going to see these guys a lot and we may end up seeing them in 11 out of 10 games.”

Howard has led the Bruins to the playoffs before and he wants the team thinking bigger this time around. The team hit a slump while dealing with injuries for a month-long stretch earlier this season, but he feels the Bruins are back on their feet now.

“We have to stay focused on the task at hand and you know it’s not just about making playoffs,” Howard said. “It’s now about winning games and trying to get back to the Robertson Cup. It’s been quite a bit of time since the Austin Bruins have been in the Robertson. I”ve been here five years and haven’t made it.”