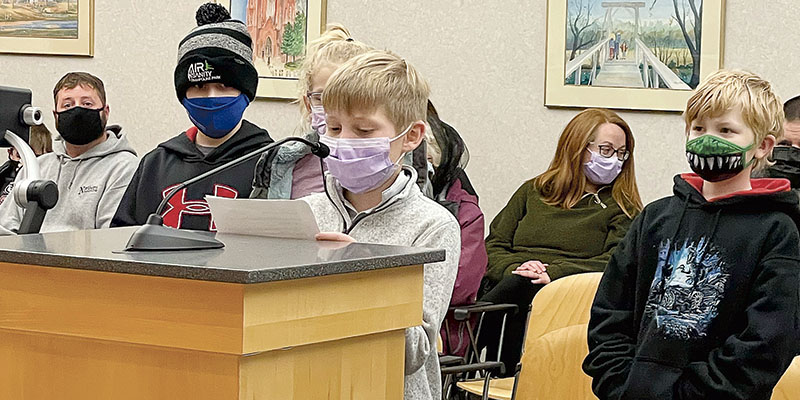 Southgate students come up with novel plan to fight hunger

Some Southgate Elementary fourth graders are growing an idea and they now have the weight of the Austin City Council supporting them.

Thanks to a simple but novel idea and with the City Council’s blessing, four fruit trees — two apple and two pear — will be planted alongside the bike path near the Wastewater Treatment Plant.

The purpose? To ensure that those who are hungry or who are in need of food have something to eat when it’s needed.

“We got (the idea) from a book that inspired us to do a community garden to stop hunger in Austin so people could just eat stuff if they are hungry or biking or walking,” said fourth-grader Spencer Riedel, who presented for a group the fourth-graders at Tuesday’s City Council meeting.

When the fourth-graders presented their idea Tuesday night, the City Council unanimously approved the decision on the spot.

Southgate fourth-graders and their teacher Ryan Timm got the go ahead to plant fruit trees in Austin to help those in need. Eric Johnson/photodesk@austindailyherald.com

“We do have a benevolent community. I’ve always said that,” said Mayor Steve King. “When you have the youth willing to put the effort in and go through the effort they did … to ask to present it and do it that way; how do you not approve that? How do you say no to that?

In the book Riedel referenced, a girl had planted a garden to help the community.

“My students said, ‘can we do it?’” said teacher Ryan Timm.

The idea evolved from a garden to the trees with the students saying they would raise the money, plant and take care of the trees, however, both Timm and the students ran into a wall and they took their problem to King himself.

King, along with Oballa Oballa had visited the school previously and King agreed to come back out to talk to Timm’s class as part of their government unit. Once the presentation was done the idea was hatched.

“We have a proposal and we’re not sure what to do from here,” Timm said. “The Mayor then invited us to come and present.”

There’s no firm timetable as to when the trees might be planted, but Timm said that the earlier the better so that the students will still be in school and can actively take part in the planting.

However, that’s part of what still needs to come and Timm said both he and his students are learning as they go.

At the heart of this idea, however, is the amount of caring displayed by the fourth-graders on a subject matter that can be a heavy topic to broach.

But in King’s eyes it’s also a subject that affects us all so he’s not surprised that the students came up with the idea.

“We talk about it and kids get it,” King said. “They understand there are issues out there and one of them is people going hungry. I’m super duper inspired. You melt when you hear it.”

Timm is also not surprised by the depth of the student’s gesture.

“This group of kids is one of the most compassionate group of kids I’ve had,” he said. “ It’s encouraging how much they care about each other and the conditions in the world.”

But the project and how it bloomed is also an opportunity to teach a civics lesson and to expand on their education.

“That’s what learning should be,” Timm said. “Student led, authentic. It’s tough to create it in the classroom, but when it does you have to nurture it.”

It’s not lost on the rest of the school either. Principal Derik Gustafson is thrilled that the students are taking an active interest in their community.

“The fact that they’re showing a lot of interest and just being civic-minded is awesome for this grade level. Even the specific details that we want a healthy snack … it is an amazing idea.”

What makes the idea so elegant though is just how simple of a remedy it really is.