Packers bounce back to down Scarlets, will host East in a big showdown Friday 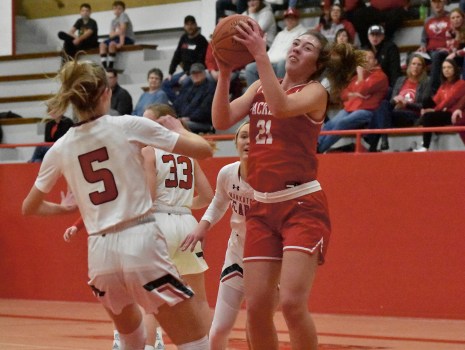 Austin’s Reanna Schmitt pulls down a rebound for the Packers. Rocky Hulne/sports@austindailyherald.com 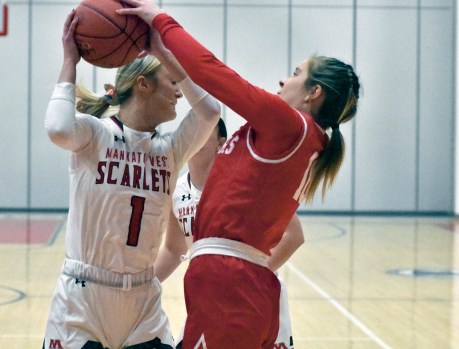 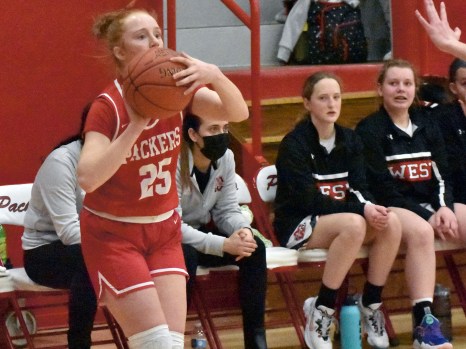 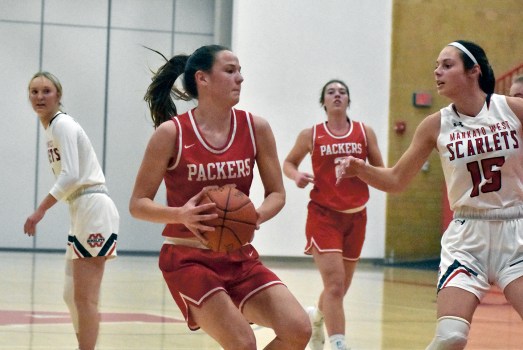 The Packer girls basketball team wasn’t about to give up when facing its biggest deficit in a home game all season.

Austin bounced back from a 14-point hole in the first half to rally and beat Mankato West 57-52 in Ove Berven Gym Tuesday, keeping its hopes for the conference crown in tact.

West had the ball down by three twice in the last minute, but the Scarlets (12-4 overall) committed a turnover on their first chance and Teresa Kiewiet missed a game-tying triple with 24.4 seconds left.

Emma Dudycha, who finished with 22 points, clinched the win for Austin (14-1 overall) when she knocked down two straight free throws to make it 55-50 after Kiewiet’s miss.

“I honestly think we play better in tough situations,” Emma said. “We play unselfish, we find each other better and we hit big shots. Games like this are super fun. This is what we play basketball for. We had a great crowd tonight. We had multiple girls hitting big shots for us and that’s what we love to see.”

West held a 31-17 lead; late in the first half after the Scarlets had nailed four-three-pointers during a 14-0 run. Austin regained some life right before the half when Reanna Schmitt pulled down an offensive rebound and scored at the buzzer to bring the Packers within 12 at the break.

“That was a big shot. I told (Reanna) that we wanted to build off of that momentum,” Austin head coach Eric Zoske said. “We stayed super positive in the locker room at halftime. We were just kind of slow and we weren’t moving the ball like we wanted to. They made eight threes in the first half and we had to weather that storm. They were 12-3 for a reason.”

Emma and her sister Hope Dudycha both hit early threes to bring Austin within 33-29 in the first four minutes of the second half. Austin eventually put together a 7-0 spurt to take a 38-36 lead. The go-ahead bucket came after Walsh, who finished with six points, five rebounds, four steals and three blocks, blocked a shot, which Hope recovered. She found Emma for a breakaway lay-up.

Schmitt finished with 10 points and five rebounds for Austin, which still has some big tests ahead. The Packers will host Mankato East in a huge showdown between the top two teams in the Big Nine. A win would give Austin an inside track on the conference crown.

Schmitt is anticipating that game and she also enjoyed the close win over West.

“It was a challenge,” Schmitt said. “The win feels like an accomplishment, rather than just going out, doing our thing and winning big.”