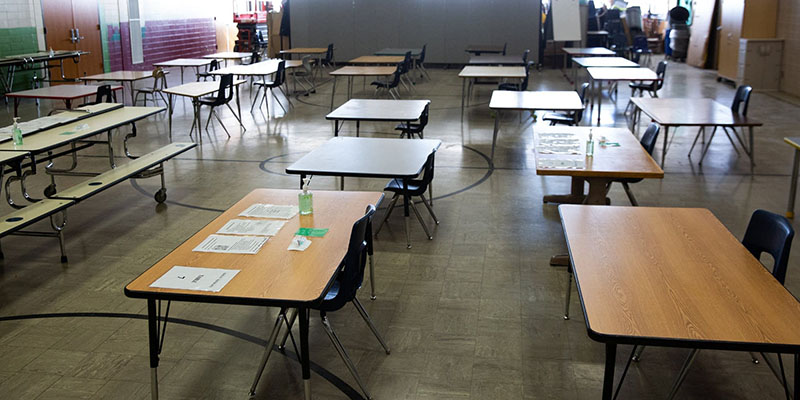 As students return to classrooms on Monday, school leaders across Minnesota are readying themselves for what may be a spike in virus spread.

“What I’ve heard from superintendents is that they are nervous about omicron,“ said Bob Indihar, the executive director of the Minnesota Rural Education Association. “It seems to be the new normal that changes are going to happen and quarantines and people being out are just part of the process now. Districts are kind of taking it in stride.”

In the Twin Cities suburb of Roseville, district leaders decided to send students home in December to spend the last few school days in the month doing asynchronous distance learning. It meant school doors were closed for a total of 16 consecutive days over winter holidays.

“From a public health standpoint, we were hoping it would sort of mitigate that spread we were starting to see in the community,” said Roseville Area Schools communications director Josh Collins. “Also our staff has just been super, super taxed and stressed. We hoped it would give some relief for mental health and wellness going into the break.”

Now, as it welcomes students back to buildings, Collins said the district will be doing what it can to keep students learning in person. Leaders are encouraging families to get their students tested for COVID-19 and vaccinated before returning to classes in January.

Close to 60 percent of Roseville public school students had already received their vaccinations in December. Collins said the district was relying on that number to rise as more younger students made it to vaccine appointments.

“We’re hoping we’ll see a reduction [in COVID-19 spread] just because of the vaccine availability to younger students,” Collins said. “We expect to see a bit of a bump, but then we hope to see things drop.”

Vaccine rates are similar among students in the Bloomington Public School district. Community relations executive director Rick Kaufman said the district has seen big rises in the number of 5- to 12-year-old students getting vaccinated.

Still, after meetings with state and local public health officials, he worries whether it will be enough to blunt an omicron surge.

Kaufman expects more staff will test positive for the coronavirus.

Bloomington school leaders are determined to keep schools open as long as possible and they’re putting out messages to students, staff and families to get vaccinated as well as boosted if they’re eligible, Kaufman added.

“To sum it up, school districts are going to see a challenge of more cases, staffing issues and probably having to consider more quarantines because of the spread that likely will occur in school,” he said.

“If you don’t have your vaccination, get it. That’s going to go a long way in slowing the spread.”