Gone but not forgotten: Mother of Bruins super fan hopes to give back to the team 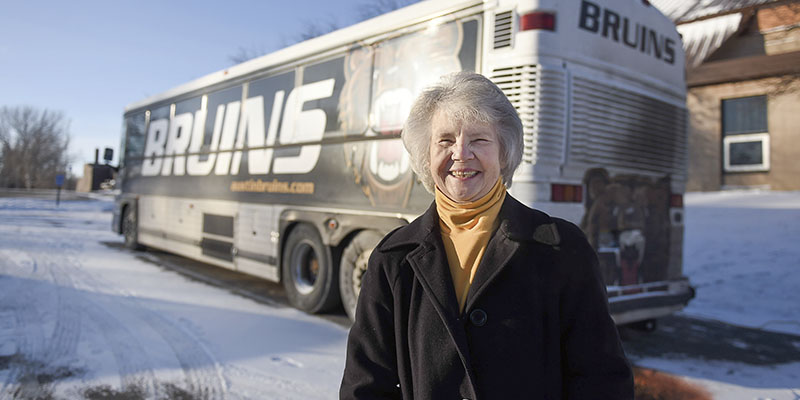 Sue Stowell stands in front of the Austin Bruins bus Friday morning. In memory of her son and Bruins super fan Ronnie Stowell, Sue is hoping to help get the organization get a new bus. Eric Johnson/photodesk@austindailyherald.com 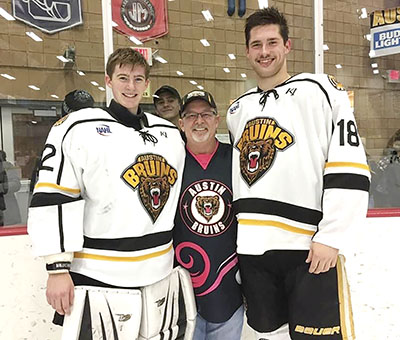 Ronnie Stowell was a die-hard Bruins fan, buying season tickets each season. Ronnie said that should he ever win the lottery he would buy the Bruins a new bus. With Ronnie’s passing, his mother Sue is taking up the cause of trying to get the team a new bus. Photo provided

One of the loudest voices in Riverside Arena is no longer filling the air during Austin Bruins games, but that super fan may still have a big impact on the Bruins’ future.

Ronnie Stowell took his life at the age of 54 this past October, but his mother Sue Stowell, who has been a billet mom for the Bruins for the past nine years, has made it her goal to give the Bruins a new team bus.

Ronnie, who was a Bruins season ticket holder, always claimed that if he ever won the lottery, he was going to buy the Bruins a new bus. Now Sue has set up a GoFundMe page in hopes getting the team a bus in honor of her son.

“He fell in love with the team when they first came to town. He’s been a wild and crazy fan,” Sue said. “Everyone in our area could tell you how loud Ronnie was during games. He would keep the fans in the game. He did a good job of that.”

Sue received permission from the Bruins’ ownership to set up the GoFundMe before she put it online, but she is doing all of the work on her own. She has still been attending Bruin games this season and the team even did a tribute for Ronnie during a game.

“It touched my heart,” Sue said. “Ronnie always went first class. He had a $60,000 truck that was very loud and he made it the way he wanted it. Now his grandson has it in Colorado. He wanted the Bruins to have the biggest and best bus that he could come up with.”

Ronnie’s funeral included a backdrop of Riverside Arena and many of the former Bruins have reached out to Sue since his passing. She has even heard from players dating back a decade.

“They are family. They live with you nine months out of the year and you take them in like your own children,” Sue said. “Ronnie loved them. He was a good kid.”

As of Friday morning, the GoFundMe page has raised $3,200 of its $100,000 goal. Any money that is donated over the goal will go toward suicide prevention. To donate to the cause, you may visit https://www.gofundme.com/f/ronnies-wish-a-new-bruins-bus.

Sue said that the Bruins’ impact on Ronnie’s life was a strong one. He loved the team and he attended many of the games with her.

“We would get in his truck and he would play Nickelback full blast going to every game and he would always look at me and say, ‘mom what time is it?’ Then he would scream ‘it’s hockey time!’ as loud as he could,” Sue said. “That’s how we ended his eulogy.”