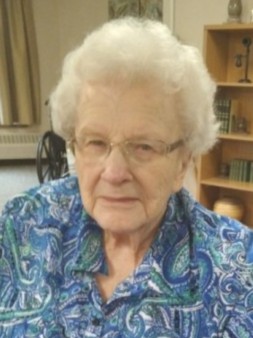 Dorothy Mae Nelson, age 98, of Apple Valley, Minnesota and formerly of Lansing, Minnesota, passed away on Sunday, January 2, 2022, at Augustana Care Center in Apple Valley, Minnesota. Dorothy Mae Meyers was born on July 22, 1923, in Dodge Center, Minnesota, to George and Maude (Pickinpaugh) Meyers. She graduated from Dodge Center High School in 1943. Dorothy was united in marriage to Roland Nelson on October 21, 1943, in Hayfield, Minnesota. Together the couple had four daughters. Family was everything to Dorothy and in their younger years, she and Roland enjoyed traveling. She also enjoyed cooking and always wanted to make sure there was plenty of food for everyone to enjoy.

The funeral service for Dorothy will be held at 11:00 a.m. on Thursday, January 6, 2022, at Worlein Funeral Home Chapel in Austin. Visitation will be held one hour prior to the service. Interment will be in Fairview Cemetery, Hayfield. Services are prearranged and performed by Worlein Funeral Home of Austin. Condolences may be expressed to the family online at www.worlein.com.