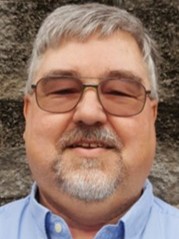 Dale was born on May 25, 1957 in Rochester, Minnesota to Robert and Jeanne (Champine) Lamp. Dale graduated from Grand Meadow School in 1975 and continued his education earning an Associate Degree at Waldorf University in Forest City, Iowa and a Bachelor of Science Degree in Accounting at Mankato State University. After completing his education, Dale worked for 30 years as a Staff Accountant for Holiday Stationstores in Bloomington, Minnesota.

Dale was quite a jolly fellow. He loved to participate in the Minnesota Renaissance Festival. Since 1985, several times a year Dale would don a costume he designed and made himself while playing the part of The Deep Fat Friar of Grand Meadow. Dale was also a faithful fan of hometown sports. Besides attending as many games as he could, Dale wore the stripes for a few years joining a crew to referee high school football. In retirement Dale stayed busy managing the condo association where he lived, as well as volunteering for the Minnesota DFL.

Dale was preceded in death by his parents and many aunts and uncles.

At Dale’s request, there will be no public service. Memorials can be directed to the Grand Meadow Food Shelf.