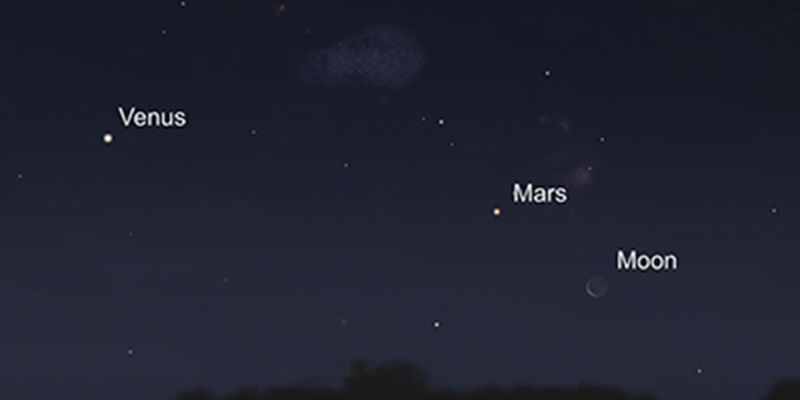 In January Venus emerges from its short trip between Earth and the sun to become a “morning star.” It begins a rapid climb over the southeastern horizon in mid-month, making its way toward much dimmer Mars. Try looking just before the sky starts to lighten on the 29th. Venus will be to the upper left of a thin waning moon and Mars will be between them, but closer to the moon.

The bright star off to the upper right of this assemblage is Antares, the heart of Scorpius. Its name means “rival of Mars,” and for the time being it outshines its planetary competitor. 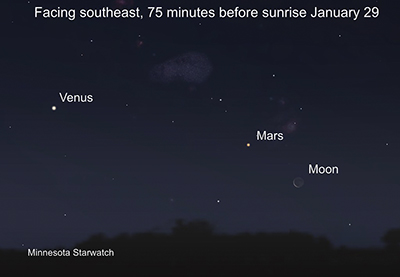 But the triangle breaks in mid-month, when Saturn gets lost in the sunset. The best evening to see the three objects may be Tuesday, the 4th, when a young moon shines to Saturn’s left. Also on that day, Earth reaches perihelion, its closest approach to the sun in its orbit, and achieves its highest orbital speed—which does nothing to help Jupiter resist being left behind in the sunset. By month’s end, the king of planets will be poised to follow Saturn over the horizon.

The first full moon of 2022 rises almost perfectly round before sunset on Monday, the 17th. Within an hour after nightfall, the bright star Procyon, in Canis Minor, the little dog, and radiant Sirius, in Canis Major, the large dog, come out and form a nearly straight line with the moon.

The bright winter stars will all be up in the east by mid-evening on January 1, earlier as the days go by. Brilliant Capella caps the group from its perch in the constellation Auriga, the charioteer, while Sirius—the brightest star in the night sky—holds the “anchor” position.

Ask a Trooper: Make the right choice this holiday…