Santa is on his way 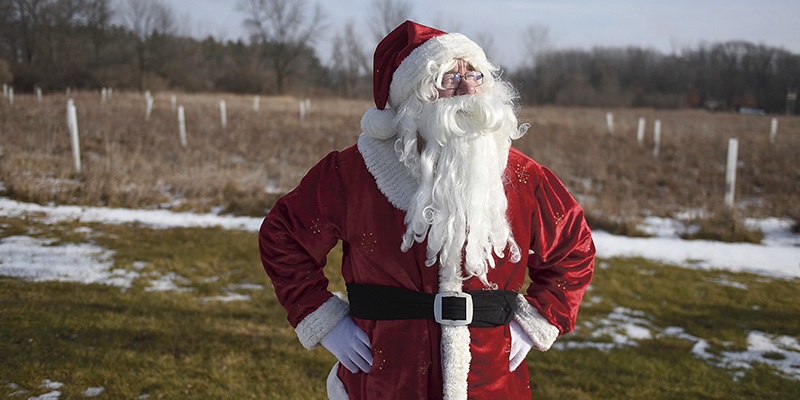 It’s a busy time of year for Santa Claus, but it’s a job he wouldn’t stop doing for anything. Eric Johnson/photodesk@austindailyherald.com

Our favorite jolly old elf is ready for the big day

During this year’s holiday season, many people are looking forward to a long weekend, time with friends and family and plenty of holiday cheer.

But one man can’t afford to take time off. For him, this is the busiest time of the year. Nevertheless, Santa Claus was able to find time in his very hectic schedule to sit down with the Austin Daily Herald and talk about this year’s Christmas.

“Busy, busy — like it is every year,” Santa said last week, after coming down from the Herald’s roof. “I have a lot of places to go.”

That’s never been a question. After a small break at the end of last Christmas, Santa was back at it, preparing for another year.

Regardless of the weather, this right jolly old elf was busy making and checking lists and plotting out a course that would take him to homes in every country on the planet.

Not that he’s doing this alone.

“I’ve got plenty of elves helping me, plus Mrs. Claus,” Santa said. “She’s a big part of this and nobody ever hears about her. She takes care of the North Pole while I’m down here.”

For many, Santa’s job comes down to one long night on Christmas Eve, with a handful of days here and there to get things in order, but he was quick to point out that there is a lot of prep work to prepare for that busy night.

He has to find just that right path that makes things efficient enough to allow for time to make his stops.

“To go the fastest I can, I have to get the lay of the land and who is where and what kids are at which house,” Santa said. “I have to collect the notes they write me. I do have some helpers. Santa has helpers all over, which I couldn’t do without them.”

The challenge comes in that Santa usually doesn’t start getting letters from kids until perhaps late October and doesn’t start visiting with children until November.

That’s what makes his helpers that much important all over the globe. They are his eyes and ears that allow him to focus on letters when they do start coming in, reading every single one of them when he gets a spare moment.

Sometimes that’s on Christmas Eve itself which speaks to the magic of the man.

“Every time I’m en route from house to house, one place to another, one building or another I get to read a few,” he said.”In between and at night, when I’m done for the day, I read quite a few of them. I’m a fast reader.”

He revealed that not all letters come directly to him so he reads those whenever he gets some down time.

Not much is really known about Santa’s Workshop, but if you were to watch any one of the holiday programs, you might be inclined to believe that it’s a small and homey establishment.

It couldn’t be further from the truth. Santa’s Workshop is truly one for the ages.

“It makes Amazon look tiny,” Santa said. “You know how many elves I have up there? Thousands.”

Most every Christmas Santa has managed his annual trek in relative solitude, even managing to evade dogs and sneaky children who try to stay up to catch a peak of him delivering goodies.

Tracking Santa isn’t easy, but he has had some partners in helping monitor his progress throughout the night, so children can rest easy knowing Santa’s on his way.

From its North American Aerospace Defense Command (NORAD), the United States Air Force, has conducted some extensive surveillance of Santa’s trip, flying side-by-side with his sleigh.

Making sure not to intrude, the Air Force fighters shadow Santa and relay his position on the planet with the help of other countries along the way, including the Royal Canadian Air Force here in North America. 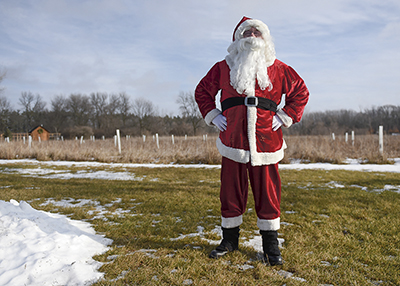 Santa Claus took some time before the rush of Christmas to talk about his routines and the day itself. Eric Johnson/photodesk@austindailyherald.com

While they take their own steps to remain unobtrusive, Santa just shrugged at their tracking.

“They’re stealthy,” he admitted. “I don’t see them, they see me. They don’t bother me. I’m too busy to worry about who’s watching me and it’s every country too. I can’t cross over into Russian air territory without having them watch me.”

“Everybody’s showing some love that night,” he added.

Santa also has local support from area law enforcement who work each Christmas Eve to make sure Santa has as few problems as possible for his important work.

“We absolutely help Santa by clearing his pathways,” Mower County Sheriff Steve Sandvik said. “We make sure the airways are clear for him to travel unimpeded and make sure nobody is an impediment to Santa’s work of getting place to place, house to house.”

One of the biggest questions Santa gets each year is from children wondering about his reindeer. With Rudolph at the head of the team, Santa is able to clearly see the route ahead of him.

This year, the team is just as primed as they have been in years past, however, Santa tries hard to keep them in the zone.

“Kids ask me, ‘where’s your sleigh and where’s your reindeer?’” Santa said. “‘Well how come we can’t see them?’ I said, ‘because I have magic dust. I don’t want people bothering them.’ They want to eat while I’m doing a place, so I sprinkle the magic dust and  you can’t see them.”

While Santa is thrilled to bring good cheer to homes, he also understands that it hasn’t exactly been easy for all of us.

He understands some of the stresses of the last two years and he sees it in some of the letters he gets.

Either way, Santa is giving up his day — or rather — night job.

“I wouldn’t give this job up for nothing,” said emphatically. “This is the best job in the world.”

Toward the end of the interview, Santa took a quick look at his candy cane-themed watch and explained that the day was escaping him and he had a lot to do, but before he left by means this reporter wasn’t able to fathom, he answered one very important question.

“Gingersnap,” he said, bucking the notion that chocolate chip was the cookie for him, though, he certainly isn’t going to turn it down either.

“Most people say that and that’s okay with me,” he said. “I’m not going to tell people.”

Beyond the Yellow Ribbon-Austin seeking community help for National…