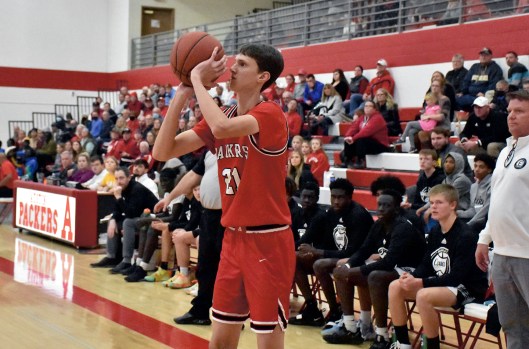 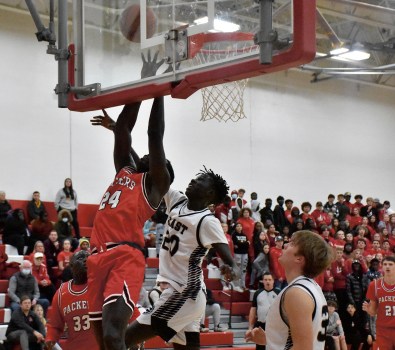 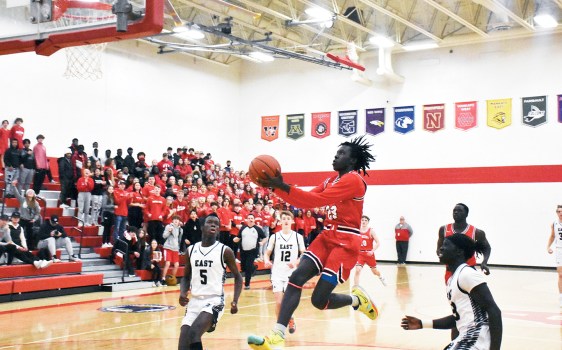 Austin’s Manny Guy takes off against the Cougars. Rocky Hulne/sports@austindailyherald.com

Jack Lang and Victor Idris hit back-to-back threes to open the game and the Cougars were never able to tie or take the lead the rest of the way. Idris finished with 16 points, five rebounds and three assists and Lang knocked down five threes and scored 16 points in his first varsity start.

“We haven’t had many years where we’ve come out in our first game and played this well,” Austin head coach Kris Fadness said. “I’ll be honest. I did not see this coming. We had an awful practice last night, but Jack Lang got it going and Jared Lillemon hit some big shots off the bench. Cham Okey played outstanding tonight and Victor gave us what we expect from him. I’m really proud of all of our kids.”

Idris was matched up against East’s BJ Omot, a 6-8 center who has drawn Division I interest. While Omot scored 12, Idris held his own against the big man.

“I wasn’t thinking about him,” Idris said. “I was focused on us and what we could do to win tonight. We hit some shots and we got momentum going early.”

Okey was able to find his shot after a tough couple of weeks. The junior recently lost his father Chol to a murder in Ethiopia, but the Packers have had his back.

Lang said the team has been 100 percent supportive of Okey.

“We let him have his space for a while and then he came back to us,” Lang said. “I’ve played with Cham for five years and I remember playing with him back in sixth grade. Tonight was a lot of fun. After the first couple of shots, the nerves were gone.”