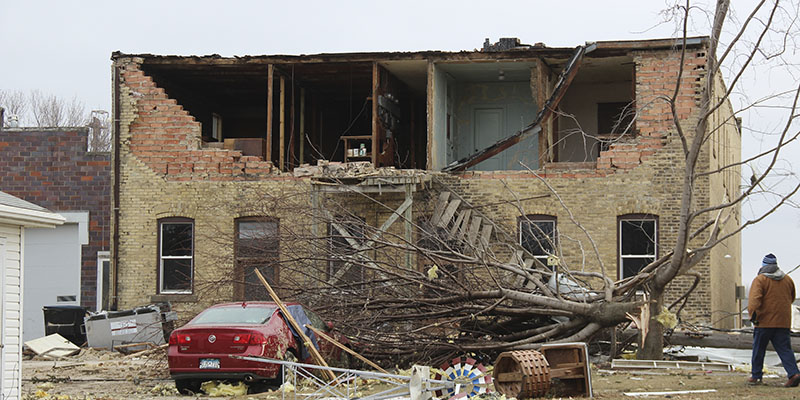 The back wall of the building in downtown Hartland that hosts the post office was ripped off Wednesday night during severe weather. Sarah Stultz/Albert Lea Tribune

Hartland residents say they are devastated by the tornado Wednesday night that came rushing into their small southern Minnesota town as part of a historic day across the state.

The National Weather Service has confirmed the tornado to be an EF2, and preliminary damage assessments conducted by the American Red Cross list 21 homes in the city with minor damage and one home with major damage, Freeborn County Emergency Management Director Rich Hall said Friday. Three businesses were destroyed, and three others had major damage. Forty power lines were blown down on the east side of the county, and nine were down in the southwest.

Melissa Bell, who owns a house west of Broadway Street in Hartland that she and her husband, Zechary, rent out, said she was not there during the storm and was just glad no one was hurt.

“Everything can be replaced,” said Bell, who lives in Owatonna.

She and her husband used to live in the house but moved out of town about 15 years ago. In 2010, the house had been damaged another time, including broken windows and doors, and the siding had to be replaced.

The house this time around received roof damage and its garage was lifted up off its concrete pad and essentially destroyed. Several trees in the backyard of the house were also damaged.

“It’s pretty incredible that winds and God can do these things,” she said.

Pieces of a garage are believed to have damaged J.R. and Joyce Henderson’s home nearby.

J.R. Henderson said he and his wife had received an alert on their phone of a tornado warning, and then the tornado sirens started sounding. When the sirens stopped, he opened the door to look, as he believed that meant the warning had stopped.

“I could hear it coming and that’s when it exploded,” he said. “That’s when the garage hit the windows. It went off like a cannon. It just exploded — that’s when all the glass and everything went.”

He said his wife was knocked to the floor in the kitchen and all of the windows on the house’s south and east sides were broken out.

Though there is glass, some shingles, dirt and debris on the floor of the house inside, many of their collectibles remain intact and untouched.

“We survived and that’s what counts,” Henderson said.

He and his wife took ownership of the house in 1997 and have lived there ever since. It previously belonged to his wife’s mother.

Matt Beckmann, who lives in a house on Barker Street further south, said he was working on getting down to the basement of his house when he heard a noise that he compared to a train.

“It came out of nowhere,” he said, noting that ahead of time he hadn’t thought the storm was supposed to be that bad.

The south side of his roof came off, and several trees were destroyed. His neighbor’s trampoline ended up several feet in the air in a tree between their properties.

Once he realized the tornado was done, Beckmann said he immediately went across the street to check on his elderly neighbor, who had several downed trees. He started cleaning up Wednesday night and was out Thursday morning doing the same.

Mariah Lynne said she and her boyfriend, Dale Christenson, tried to be as prepared as possible ahead of the storm and had things set up and ready to go when the threat became a reality.

Lynne said she had even let her employees at her business, Good Steward Consulting, leave early that day to prepare their farms for the storm.

Lynne said she, Christenson and Lynne’s two children, ages 9 and 12, went downstairs after the alarm went off and sat underneath the stairs.

Shortly after, the power went out, and then they heard sounds of things crashing for what Lynne estimated was only about 15 seconds.

They waited under the stairs a little while longer before coming back upstairs and starting to survey the damage and then deciding to take the children to their grandparents’ home in Albert Lea.

“We didn’t get to full see all the damage until this morning,” Christenson said.

Their damage included some to the roof, siding, screens and an attic window. The garage wall and the north side of the house shifted slightly, their outside tables and furniture on the porch went through their fence and some trees were down. Christenson’s truck was moved about 10 feet in the driveway.

Lynne had moved the house from another location in the county two years and two days before the tornado to the William and Railroad street Hartland intersection.

“I’m just grateful we are here,” Lynne said. “We have each other.”