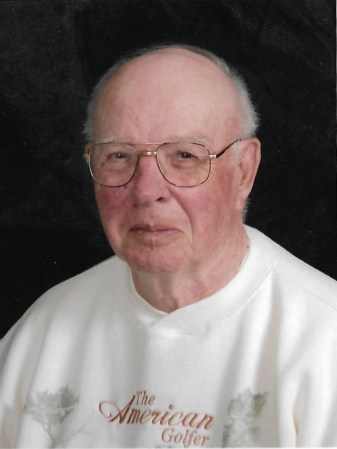 He was born June 15, 1930 in Austin, Minnesota to Del and Lurenne (Stromer) Perry. He attended Austin High School. Duane served in the US Air Force during the Korean War. He married Darlene Cunningham in November 1954 and they had 4 children. Duane was employed by the Hormel Foods Corporation. He worked in Kansas, Iowa, Nebraska; as well as Duluth & Sartell, Minnesota before returning to the Austin Plant until his retirement.

Duane enjoyed boating, snowmobiling, golf, camping & playing cards. He was an avid Green Bay Packers fan. He solved many world problems with the guys over the counter at the coffee shop. His sanctuary was his garage where you could always find him with a smile & cold one. Duane had his own unique way of doing things – or not doing them. He was not a man of many words, but his warmth of family was known & extended in an open-door policy for his loved ones.

He was preceded in death by his parents; brother John; brothers-in-law Don & Al.

Duane spent the last chapter of his life under the compassionate & tender care of the staff at The Legacy of Brownsdale & Interim Hospice Healthcare.

Private family graveside services will be held on Saturday, December 11, 2021 at Oakwood Cemetery. Condolences may be expressed at clasenjordan.com. Clasen-Jordan Mortuary is handling funeral arrangements.