Back to the auction block 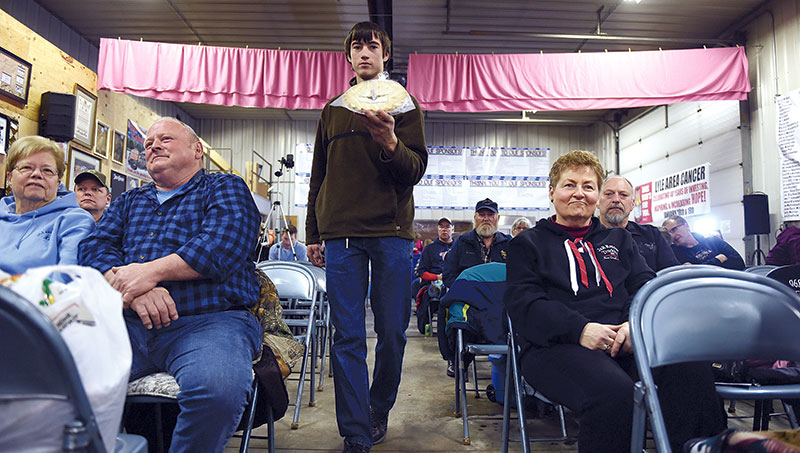 Wilson Shirk parades a freshly made pie for auction between two of the bidders, Mike McCabe and Roberta Ransom during the Lyle-Area Cancer Auction in 2020. Herald file photos

Like so many things last year, the Lyle Area Cancer auction was a victim of the COVID-19 pandemic.

Instead of holding the annual auction, the organization adapted, turning an event that is usually spread over two days into a drive-thru meal that all things considered was a big success and was able to raise an astounding $24,000 in just three hours.

When adding in other events including Quilting for a Cure, Cropping for a Cure and Cans for a Cure that contributed throughout the year, the LAC raised $38,000 last year.

Not bad, but now the LAC is setting a target on normalcy with plans to revert back to the familiar two-day auction people have grown to love over the years — with some differences.

The reason is simple: Organizers don’t feel there is room for extra burdens on businesses.

“We’re not soliciting,” Ricke confirmed. “The biggest thing is businesses have been hit. Some really got hurt bad.”

The COVID-19 pandemic has hit area businesses hard and so the LAC is doing what it can to make it easier for businesses to donate what they can while attempting to hold the event at the same time.

“We hope that businesses do call any of us,” Ricke said. “Cancer doesn’t go away, but neither does COVID. We have to do something.”

The LAC has a variety of ways people can get items to them including a call ladder of people who can arrange to pick items up, along with locations for people to drop items off.

Organizers are looking for newer items that can go up for bid.

While the event is still somewhat at the whim of how the pandemic develops, Ricke said the LAC is determined to have the auction. Even if the auction manages to exhaust its supply of items, it still wants to go for the entirety of the two days.

“I’m very excited,” Ricke said about the prospect of a normal event. “The last two years a lot of people I’ve known have passed away from cancer. I’m excited [to hold it].”

The Lucille Johnson Annual Cancer Pool Tournament in Carpenter, Iowa is a big contributer to the Lyle Area Cancer Auction and will be making its return this year. Photo provided

A major partner in the LAC’s auction lies just to the south, across the border in Iowa.

The Lucille Johnson Annual Cancer Pool Tournament, held in Carpenter, Iowa. Started in 2001 following the death of tournament chair Adam Johnson’s grandmother, the tournament has since raised $36,650 in the past 20 years.

Funds raised are given to the LAC, which in turn gets donated to the annual Eagle’s Telethon in Rochester with the rest of what the auction raises.

“When the pool tournament started we had just a few teams and we’ve grown to accept 90 some teams,” Johnson said.

The three-day tournament this year will be held Jan. 7-9 and has slots open for 96 teams. The event is an effort unto itself behind the effort of the Johnson family and a whole host of volunteers.

“It really means a lot,” Johnson said. “Everybody has been affected by it in some way or another. It’s really cool all of these people can come together in this community and raise the money we do.”

“It’s good to see people out and together,” he added.

Teams are guaranteed four games throughout the three days.

“You’re going to be there for a while and have some fun,” Johnson said.

The cost to enter is $75 for two-person teams. Check-in is Friday night from 5-6 p.m. with shooting starting at 7 p.m. Championship games will start being played Sunday afternoon.

A youth tournament will be held Sunday with check-in from 10-11 a.m. with shooting starting at noon.

People can send their entry fee to 304 North Washington Street, Carpenter, Iowa 50426, payable to Tim Johnson. Checks can also be dropped off at the Carpenter Bar.

Johnson said spots generally fill up fast, but there is a waiting list just in case teams drop out. Spots will not be secured until payment has been made.

For more information on the pool tournament, visit: www.facebook.com/PoolTournament

How you can donate items to the Lyle Area Cancer Auction

Where to drop off