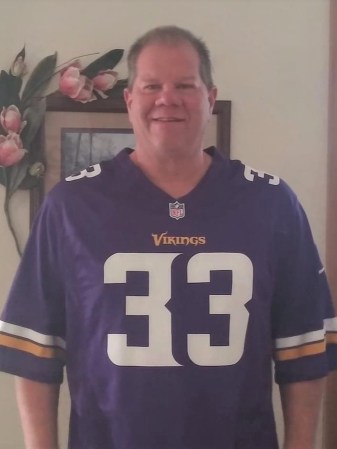 Allen “Smiley” LeRoy Brandt, passed away on Tuesday, December 7, 2021, at his home in Austin, Minnesota. He lost his battle to lung cancer at the age of 57. Allen was born April 30, 1964, in Austin, Minnesota to LeRoy and Shirley (Pell) Brandt. He was baptized and confirmed at St. John’s Lutheran Church in Austin. Al attended and graduated from Austin High School in 1982. He married Deb Carolan and to this union two children were born, Jacob and Kelsey. They later divorced when the kids were young. Al held various jobs over the years including a print apprentice at Robinson Business Forms, a delivery driver for Culligan, maintenance for Mayo Clinic Health Systems, and most recently worked for Daikin in Owatonna, Minnesota. Al enjoyed farming at various farms, playing softball, and bowling. He once had a 300 game and bowled an average of 200. Al also enjoyed attending car shows, watching college football, and was an avid fan of the Minnesota Vikings and Minnesota Twins.