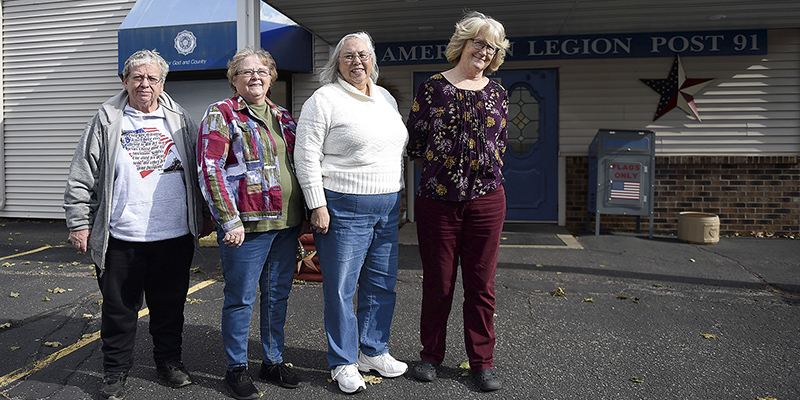 Sue Roberts, from left, Sandy Maiden, Eileen Chao and Amy Mayers stand in front of the American Legion Post 91. All four served in the military with unique stories. Eric Johnson/photodesk@austindailyherald.com

4 local women share experiences of their time in the military

On a sunny November afternoon, four United States military veterans sat around a table at the American Legion Post 91 and talked about their time serving our country.

While some experiences mirrored every other veteran who has served, many were singular experiences to them alone simply because they were women who served.

However, their pride in serving is no less.

Their stories are different, but no less intriguing.

“If I had been fully informed of what I was getting into, I would still go in, but I would have been more aware of what was going on,” Mayers said. “It was worth it.”

These are their stories. 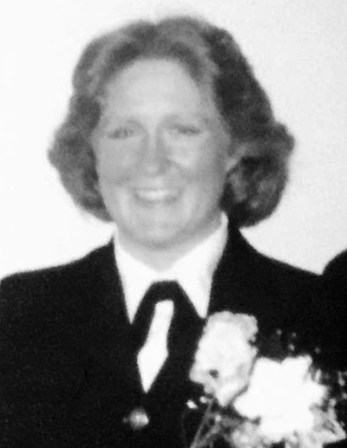 One thing that’s guaranteed to get your attention when talking to a veteran is when they tell you that they can’t tell you what they did.

That is Amy Mayers, who was a Russian analyst for the Navy.  She joined because of a family tradition of joining the Navy. To this day, much of what she worked on is labeled classified  making it difficult to truly explain what she did, except to say that she was one part of the military whose job it was to know the communist nation.

“The job that I did as a Russian analyst … I was involved in the security of the facility and the information we processed,” Mayers said.

It was an excellent use of a woman who can speak four languages. Russian was taught to  her by the military, but she learned German and Spanish on her own.

The experience was eye-opening in a number of ways. Though she would say she enjoyed working as an analyst, it wasn’t something she initially planned for.

She already knew German and had designs on being a German linguist, but the military had other jobs for her. It was the Armed Services Vocational Aptitude Battery (ASVAB) that played a major role in where Mayers served. An irony that isn’t lost on her.

“The interesting thing now is working in the high school, I schedule and help give the ASVAB test,” Mayers said. “Anybody going into the military has to take it. If you get a really high score, you get fewer options.”

The reason, Mayers explained, was that to gain high proficiency in the test was to allow the military to specialize in terms of using a test-taker’s aptitudes.

And so, Mayers began her work which opened up the world to United States-Russian relations.

“Even while I was in the service, I realized that the relationship with Russia is very tenuous and could change on a moment’s notice and it still is,” Mayers said. “Part of my training was Russian history and politics and I’ve kept up with it until this day and I remain cautious as to their motives.”

Service contributed to Mayers’ swift rise to adulthood, even after joining at an age older than most.

“I certainly grew up a lot,” Mayers said. “I was 21 when I went in. Most of the girls in boot camp were 18 and 19 and I was the oldest person in my boot class. I grew up pretty quick and it helped me realize I had value.”

That’s not to say she didn’t notice the difference in men and women in the military.

It wasn’t until the late 80s that women were allowed to serve on combat vessels. For Mayers that meant her job was land-based and it was something the men she worked with certainly noticed.

“I did encounter a fairly large amount of flak from my male coworkers,” Mayers said. “In the Navy, women at the time weren’t allowed to go on ships. When we had positions, we had them at headquarters and we were taking their land assignments, which forced them to stay out to sea longer.”

Still, Mayers enjoyed her time as an analyst and her time in the military.

“What I learned in the service framed my viewpoint of international relations,” Mayers said. 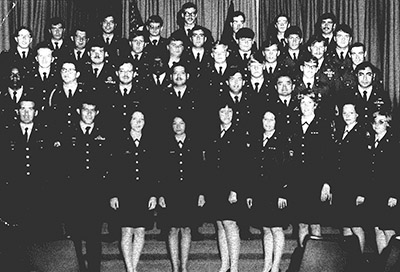 Cassandra (Sandy) Maiden came out of her time in the military with her LPN in nursing, but it all started with a rather inauspicious, if not ironic, beginning.

“I was asked to leave the nursing program in Pennsylvania,” Maiden said. “I did get my LPN, but I had no idea what I was getting into.”

Her time in the Army opened up a new world for Maiden. An unfamiliar world. Up until that point, the only other family member with military experience was a cousin who had been in ROTC.

A self-described tomboy of the family, Maiden found structure in the military that was recognized by her family.

“Mom said I could have gotten into a lot more trouble than I did and they prayed for me for a while,” she said.

Not that there wasn’t the occasional bump, including the time she unknowingly bought a stolen saddle while in the service, leading to interest from the FBI.

Importantly though, the military gave her something that Maiden was missing.

“The military gave me an education that I could use,” she said, relating that she had high enough scores on the boards that she could work in any state.

A good chunk of her training came as an Army medic and she found herself working in a state-side Mobile Army Surgical Hospital (M.A.S.H.) unit.

The experience wasn’t completely unlike a certain TV show you might be thinking about.

“It really was like M.A.S.H.,” she said. “You had your Frank Burns, your Hawkeye. In the medical company, we got away with a lot.”

Maiden’s time in the military took her throughout the nation to a number of different bases and stops, including a stint with the old Navy Hospital in Albert Lea.

Her involvement continued after the military, which she left as Specialist 4. At first it was as a member of the Legion Auxiliary, but eventually she was able to join the Legion.

Either way, Maiden sees her time in the military as the right choice, something she is proud of to this day. 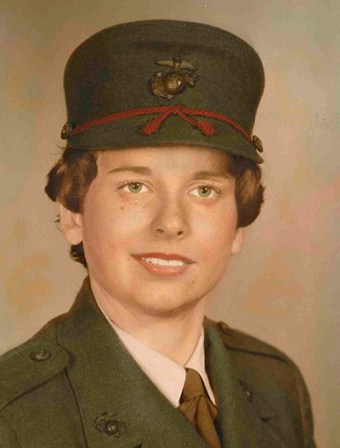 Corporal Sue Roberts served in the Marine Corp during one of the most tumultuous times in our history.

Roberts served in the midst of the Vietnam War, and even though she served stateside, she wasn’t spared some of the worst parts of the war. Still, her time as a marine is filled with no regrets and just as much pride as any marine veteran.

Her time in the military started with just a simple need for an education.

And it worked out. A dream of being a phys ed teacher may have been put on hold as schools laid teachers off, but she had other skills now.

That started in boot camp.

Neither Roberts nor the other women were treated any different from the men. All had the crucible to walk through.

Eventually, Roberts was placed in air operations, where pilots came to file flight plans, complete with where they were going and what and who they were carrying.

Except for one very special flight: Marine 1, the helicopter that carries the President of the United States. In regard to Marine 1, secrecy was of the uppermost concern.

“They couldn’t say where they were going,” Roberts said. “They never came in with a flight plan. We  just got a time that they better be back there.”

In the background was always the Vietnam War. Roberts served at the military base at Quantico, Virginia and during her time there she saw first hand the soldiers coming back from the battlefield.

She saw it in their eyes and the way they were treated.

“They were spit on,” Roberts said. “It’s terrible to see that. They didn’t understand. They never understood why they did that. They should have been honored.”

Her time left a mark on Roberts in more ways than seeing the haunted soldiers return from war. She loved the benefits of enlisted life, even after getting out.

“I had a job for 32 years -— my own business,” Roberts said. “I was able to have my own business because of the Marines and today I’m still proud to be a marine.”

She said it also has led to a life filled with vigor and the opportunity to do different things. Roberts  attributes that to the Marine Corps and she has no doubt as to her answer if she is called again. 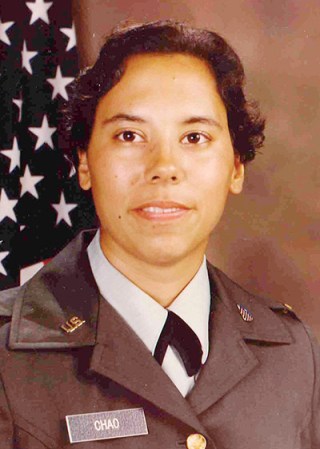 Eileen Chao needed a job. After attaining her masters degree, but finding little opportunity, she decided to make a bold move.

“I was looking for a job one day, and there was Uncle Sam,” Chao said.

Chao’s family has a rich military tradition including her dad who was a M.A.S.H. doctor in Korea, an older brother who was a marine and an older sister who was in the army.

Chao didn’t simply join the military. She had a very specific goal and that goal came from her dad.

“If you’re going to be in the army, you might as well be an officer,” Chao remembered being told.

And so she went into officer training, something she went through more than once. A stress fracture ended her first run, forcing her after some time to go through the 90 day course once again.

Chao went into the experience with her eyes wide open and her education and training took her all over the country and world. Most of her schooling came from her time in Korea.

She also spent a large chunk of time in the Netherlands, during a very serious time: during Desert Shield and Desert Storm. Her unit was in charge of processing materials for the Persian Gulf.

“Going into wartime is so different,” Chao said. “We’ve got material coming out of Germany — tanks and equipment. We were also pulling a lot of people.”

While the conflict didn’t last very long in the grand scheme of things, the work didn’t stop as equipment and troops flowed in reverse through the base.

Chao was able to see first-hand the changes taking place in the military. During her time teaching French at West Point, Chao noticed it in the change of wardrobes.

“Everybody was wearing slacks because the women at West Point didn’t want to stand out,” Chao said. “Two years later, my third year, they wore skirts because they had been accepted.”

“They were opening it up more and more,” she continued.

Military service left a positive impact on Chao and she highly recommends people give it a chance.

“You only remember the good times. I do anyway,” Chao said. “I would definitely recommend it to other people if you are looking for something interesting to do.”