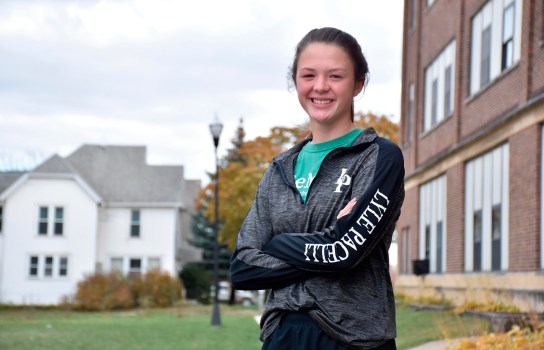 Pacelli freshman Kirsten Koopal has learned from some of the Shamrocks’ best and now she’s willing to take their lessons to the big stage.

Koopal will make her debut at the Minnesota Class A State Cross Country Meet at St. Olaf College in Northfield this Saturday, and when she runs, she’ll certainly be inspired by former Pacelli runners Kayla Christopherson, Rory Bickler and Nathan Drees. All three of those grads have state meet experience and they all spoke to Koopal shortly after she clinched her trip to state.

“They told me to soak it in and have a good time,” Koopal said. “This means a lot. State has been my main goal since I watched Kayla go. All throughout the season, our main goal was to do well at sections. I trained with the idea of sections and the state meet being the goal.”

Koopal took 10th and finished with a time of 20:56 at the Section 1A meet last week. It wasn’t her best time, but it was still a solid finish, considering the conditions.

“It’s already a really hard course and having the rain and the cold didn’t help it all,” Koopal said. “It was really slippery and people were falling, but I guess you’ve got to go with what you get. I knew everyone had to go through it and I had to fight hard to make it.”

Koopal is excited about going against some faster runners this weekend as she always finds a way to stay motivated, even when she begins to hit the runner’s wall.

“You do it so many times that you know you can do it no matter what,” Koopal said. “You’ve just gotta keep pushing.”

Koopal will run at 1 p.m. in the Class A girls meet Saturday.