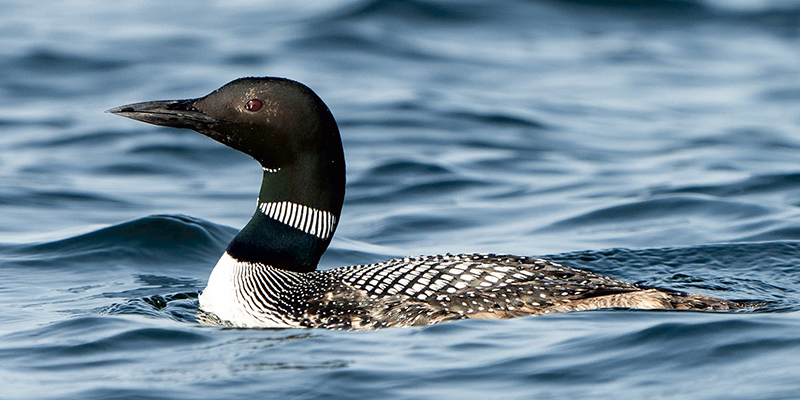 A common loon floats on Lake Minnetonka. Loss of nesting habitat is a substantial threat to loons as people develop their shoreline on lakes. Evan Frost/MPR News 2019

But undisturbed lakeshore is becoming a rare commodity in Minnesota.

“We do know there are two nesting loons right near this parcel,” he said. “So it’s a prime spot right on the peninsula between the two major lakes, and there’s a channel connecting them.”

Mobeck said the lakes are home to several loons that have been banded for research.

He isn’t making the exact location of the property public, because he wants to protect the loons from gawkers until they have a plan for managing visitors.

But Mobeck hopes that in the future, the site will offer an opportunity for the public to learn about loons in their natural environment.

“So there’s an education piece in addition to the raw value of the habitat,” he said.

The loon center received a $355,000 grant for the purchase from the state’s Outdoor Heritage Fund, which receives sales tax revenue from the Clean Water, Land and Legacy Amendment.

Minnesota is home to roughly 12,000 common loons, more than any other state besides Alaska. They face persistent threats, including climate change, pollutants like lead and mercury and human disturbance.

“That’s often the first thing to go when somebody buys a piece of land,” he said. “What loons like to nest in is what humans usually like to destroy, unfortunately.”

Loons also have been threatened by the increased boat traffic many Minnesota lakes have experienced during the pandemic, as more people seek outdoor recreation.

Educating the public about how to protect loons and their habitat is a key mission of the National Loon Center, which plans to open an interpretive and research center in Crosslake in 2024.