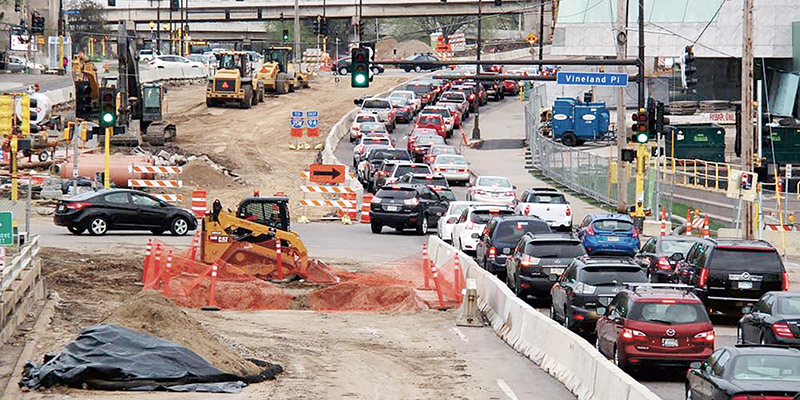 Traffic navigates through the construction from the Hennepin/Lyndale Avenue Reconstruction Project. The $1 trillion federal infrastructure bill will pay for roads, bridge and transit improvements in Minnesota as well as provide cash for broadband internet and electric car charging stations. William Lager | MPR News 2016

A truckload of federal cash is headed Minnesota’s way once President Joe Biden signs the infrastructure bill Congress passed late last week. The state is in line for billions of dollars for highways, transit, and bridges as well as broadband internet and electric car charging stations. But it will take a few years for the money to roll out, and the specifics of how it will be spent remain to be determined.

The numbers are stunning. According to the White House, there’s $4.5 billion coming to the state for highways, $302 million for bridge replacement and repairs and $818 million for public transportation. There’s at least $100 million for broadband internet expansion in communities around the state.

“We will start to hopefully see money maybe late this year, but early next year,” said Minnesota Department of Transportation Commissioner Margaret Anderson Kelliher, who will play a key role in how most of the infrastructure money is spent.

“Right now, we’re going to be very focused on going through and making sure we’re understanding each piece of this historic federal investment and just very grateful that it’s happened,” Kelliher said.

The new money will allow the department to speed up many projects that are currently slotted for 10 years or more in the future, Kelliher said.

Federal money is already a significant funding source for state transportation, and some of the new money will directly enhance those accounts. Kelliher said the Legislature will also be involved because state matching funds are needed.

“We will need action by the Legislature and a signature by the governor as we move through this process to be able to put those matching dollars together,” she said.

Kelliher estimated the total cost of the state match for the highway funding at approximately $1 billion.

Every Minnesota Republican in Congress voted against the bill, but there appears to be more enthusiasm back home.

Sen. John Jasinski, R-Faribault, the vice chair of the transportation committee, said he’s excited to have more money to spend on roads and bridges. Senate Republicans want to have a say in which projects move forward, Jasinski said, and not leave those decisions solely up to MnDOT.

“The administration calls them earmarks. We call them constituent requests,” Jasinski said. “I think if the governor listens to his input from the Legislature and spends that money on things that we as representatives for our citizens of Minnesota are asking for, I think that’s very important.”

Along with building roads and fixing bridges, the federal money will create construction jobs. Jason George, business manager of the International Union of Operating Engineers Local 49 said the bill’s passage was a great day for job creation. George is not worried about having enough workers for the expected jobs. His organization has a recruitment program in place and will be ready to staff up, George said.

His union will now press state lawmakers to make the investment go further by coming up with matching funds where they are needed,” George said.

“Unfortunately, elected officials when presented with an opportunity to do nothing too often punt and do that,” George said. “But we’re going to make an argument pretty strongly that Minnesotans should be demanding that we get every penny that we can from this federal bill, because we pay a lot to the federal government.”