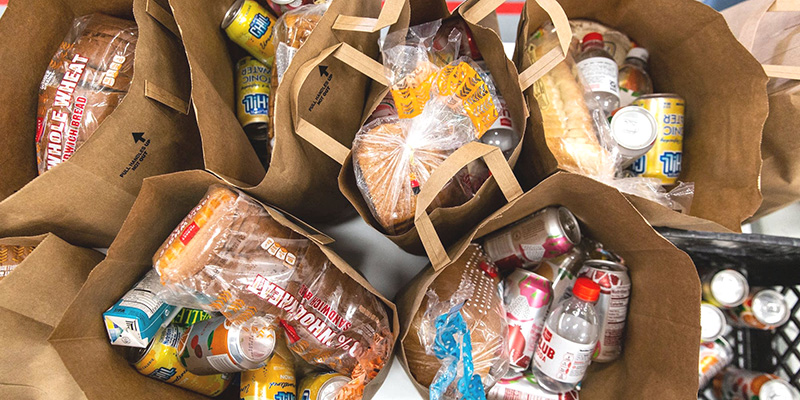 The price of groceries, gasoline and other products is going up. The inflation rate could hit 5 percent this year, higher than it has been for decades. Evan Frost/MPR News file

People on fixed incomes may be the first to notice higher prices. John Erickson, 72, of St. Paul certainly has.

“Like gas, like the food prices. I don’t have anything good to say about what’s going on right now,” Erickson said as he made his way into a popular discount grocer in Maplewood.

“Shredded lettuce for tacos,” Connelly blurted out. “The last time I bought a bag. It was $1.69. It was $2.34 yesterday. And I thought wow, that’s quite the increase.”

A measure of the increased cost of goods and services — called the Consumer Price Index or CPI — peaked at nearly 14 percent in 1980.

The White House recently more than doubled its forecast for the CPI this year, now projecting the rate to reach nearly 5 percent in 2021.

“We’re a long way away from 12 or 14 or 16 percent inflation. A very long way,” said Brandeis University professor Stephen Cecchetti, who worked at the Council of Economic Advisers when inflation was front-page news, which it has not been for a very long time.

“Inflation has been in the range of 2 percent or so, basically since the mid-1990s,” Cecchetti explained. ”So most people have not experienced inflation levels that were really noticeable.”

As in most periods of inflation, prices aren’t rising across the board, Cecchetti said. Right now anything that requires a lot of labor is more expensive because wages have increased, and food prices are likely up because of increased transportation costs, Cecchetti said.

Products that require computer chips are more expensive because of a parts shortage. Energy prices are up too.

“It’s like a tax,” said University of Minnesota Carlson School of Management marketing professor Mark Bergen. “It’s taking your budgets, taking your income, and it’s slowly eroding away how much you’re going to be able to buy.”

There are actions consumers can take to respond to inflation, Bergen said.

Bergen said inflation hits people with the least the hardest.

“Some of the more vulnerable populations where their budgets are already constrained, these inflationary pressures add a lot more stress,” Bergen said.

Outside the grocery store in Maplewood, retiree John Erickson echoes those concerns.

“The people that are on fixed incomes are the ones that are going to suffer,” Erickson said, adding that he’s much more on the lookout for bargains now that prices are increasing.

“Hell yeah. That’s why I’m here instead of going to Cub and Byerlys — the savings,” Erickson said.

Connelly, the woman who noticed the higher price of lettuce, said she’s not a big shopper and isn’t worried about inflation cutting into her quality of life. She said her concerns are for people who are not as financially secure as she is.

“I’m worried greatly for the country,” Connelly said. ”I don’t think we’re going to come out of this very well.”

While some are bracing for sustained higher inflation, Cecchetti sees the outlook differently.

“There’s no reason to believe that energy supply chain or labor shortages are going to cause inflation to continue at high levels, rather than just see level adjustments,” Cecchetti said.  “Once people raise their wage from $15 to $20 an hour or whatever they’ve been doing and it attracts more workers, they don’t have to do it again.”

Cecchetti added that the Federal Reserve will have to raise interest rates sooner than it wanted to counter inflation.

“That’s pretty much an expectation at this point,” Cecchetti said. “So short-term inflation is high. [In the] medium-term, longer-term: inflation is back to the level that it’s been in the past quarter century.”