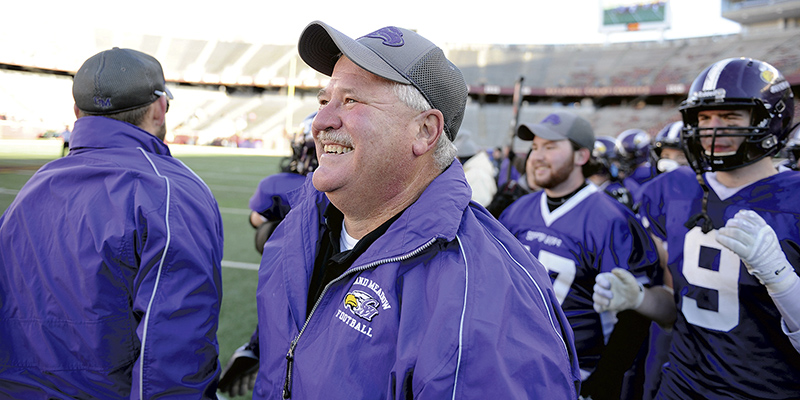 GRAND MEADOW — Gary Sloan has won 230 games and four state titles with the Grand Meadow football team, but he is far more concerned with the number of his players who have gone on to lead successful lives.

Sloan recently resigned as head coach of the Superlarks after 29 years on the job and many of those former players have been reaching out to him through texts, e-mails and phone calls. It’s been a little overwhelming for a humble coach, who usually spends the month of November projecting the roster for next season.

“I have a lot of corny phrases, but my main one is to ‘do it the right way.’ That’s not just in football, that’s in life,” Sloan said. “It means so much more than football. We want to do it the right way in the classroom and the community. I told the kids the other night that I hope they learned more from me than just football. I want them to go on to live a good life and be good dads and good husbands.”

Josh Bain, a 2007 GM grad, has seen Sloan in all aspects of life as he lost three section title games as a player under Sloan, and later coached with Sloan when his younger brother Christophor won a state title with the Superlarks in 2016.

Bain, who also has experience coaching with former Albert Lea wrestling coach Larry Goodnature, said that Sloan taught him to focus on the basic things like blocking and tackling.

“I’ve been blessed to work with two Hall of Fame coaches and they both focused on fundamentals and doing the little things right,” Josh said. “I’m now coaching and teaching in the town I grew up in. It’s kind of contagious. I try to install the fundamentals as well. Gary’s just a good man overall and he loves the game, but he loves the players mostly. As a coach, if you take care of the players and teach them to the best of your ability, they’ll leave it all out there for you.”

Isaac Tangen graduated from GM in 2014 and was a captain on the first-ever Superlark team to win a state football championship in 2013. Sloan coached Tangren’s uncle on the first GM team to ever go to state and he also coached his brother Trent.

Even after all these years, Tangren said that Sloan will check up on him whenever their paths cross.

“He always said that life is more than just football. Family and the classroom come first. He was a big role model for me and he helped me grow into the man that I am. I’m forever grateful,” Tangren said. “He cared personally about you and when you have a relationship beyond being a football player, that means a lot, especially as a 17- or 18-year-old kid who is moving on in life. He always had things to say that really helped you progress. He always said everything happens for a reason and he wanted you to believe that you could do whatever you put your mind to. He’s very outgoing and very unselfish.”

Sloan knew this season would be his last before it began and he even considered retiring after the 2020 season. He was hoping to announce his retirement officially at the football banquet, but the word got out through Facebook shortly after GM’s season-ending loss to LeRoy-Ostrander.

While Sloan would’ve liked to have coached in one more state tournament, he was happy he got to coach the Superlarks one last time in front of the home crowd in GM.

“I’m not happy with how it ended, but I can accept it,” Sloan said. “There was a tradition that started way before I got here. Grand Meadow is a football town. It’s always been a football town before me and I think it always will be. The kids have been willing to be dedicated and to commit to it.”

Sloan will retire from teaching at year’s end, but he’ll remain as GM’s athletic director and transportation director. It will be a big change for him to be off the sidelines, but he knew the time was right to step down.

“I’m confident in my decision and I know I’m doing the right thing. That makes it easier,” Sloan said. “I really appreciate the support that our program has been given all of these years from the assistant coaches, the community, the school and the parents. It takes a commitment from a lot of people.”

The Larks will continue to play games without Sloan next season, but it will be a long time before his name isn’t associated with the program in the minds of fans and players alike.

“When you think of Grand Meadow football, you think of Gary Sloan,” Bain said. “It’s been a lot of good times and a lot of great memories playing and coaching for him. He’s a fundamental kind of guy and he makes it a simple game. It’s not about the Xs and Os, it’s how you execute.”