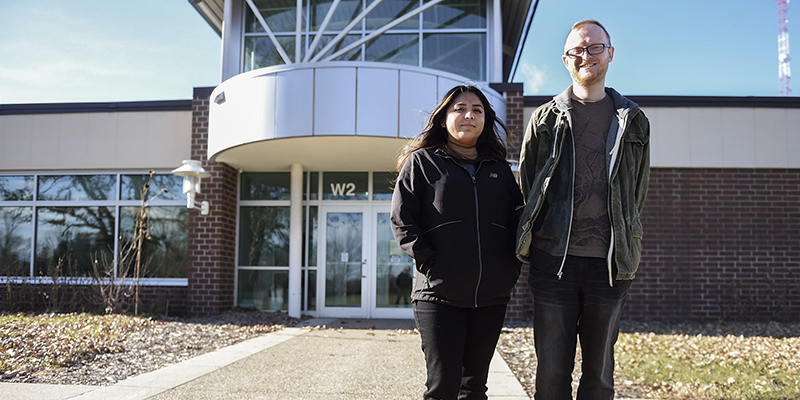 Ian Gearhart and Evelyn Rosas came out of Riverland’s Discussion Meet two weeks ago to represent the college.

“It’s great to see students working together and seeing them solve problems that they are being asked,” said RCC ag instructor Nick Schiltz. “It encourages students to put a worldly view on things and apply them in the classroom.”

A Discussion Meet places before students questions, which they are tasked to find solutions for. There are five questions in total, but only two will be presented to students. However, the participating students have no idea which of the five questions will be asked.

“We were given the questions ahead of time, but we weren’t sure which ones they would pick,” Gearhart said.

“We just had to prepare for all of them,” Rosas added.

The questions are designed to tap into a student’s critical thinking skills in a group setting, but there is a caveat to it all. While the group works on the problems, it’s also an individual competition.

“You’re presented with a problem and we all discuss as a group on ways we can figure out an answer to the problem,” Rosas said.

Judges are looking at how each student contributes, leads and organizes their thoughts.

“You’re working together, but you’re sort of competing as an individual,” Gearhart said.

This is the third year Riverland students have taken part in Discussion Meet, but only the second time a student has placed.

A student placed fourth in 2019, but no students have advanced to the National Discussion Meet.

“Each year the students perform better and better,” Schiltz said. “It’s a joy to be a part of this competition and just watch these students build their problem-solving skills.”

What’s interesting about Gearhart and Rosas advancing is that neither come from a traditional agriculture background.

“It opened me up more,” said Rosas, who is pursuing a degree in environmental science. “It showed me I don’t necessarily have to grow up in an agricultural family, but still be involved in these programs (Riverland) has. It developed me to be more open.”

“It’s interesting that Evelyn and I, of the students that competed, have the least amount of farming background,” said Gearhart, who is pursuing an agricultural science degree.

Despite the point of the competition, the Discussion Meet had another benefit for both students. It introduced them to a world of connections as well as providing opportunities to open up more.

“It’s validating to know that you can come from a different background, educate yourself and be a valuable participant,” Rosas said.

“It was a great opportunity to start making connections in the industry,” Gearhart said.

Rosas and Gearhart will begin competition at 8 a.m. Saturday in Bloomington, and should they advance to the finals, will compete at 11 a.m.

A Region 8 Discussion Meet for High School FFA students will be held at Riverland on Jan. 28.