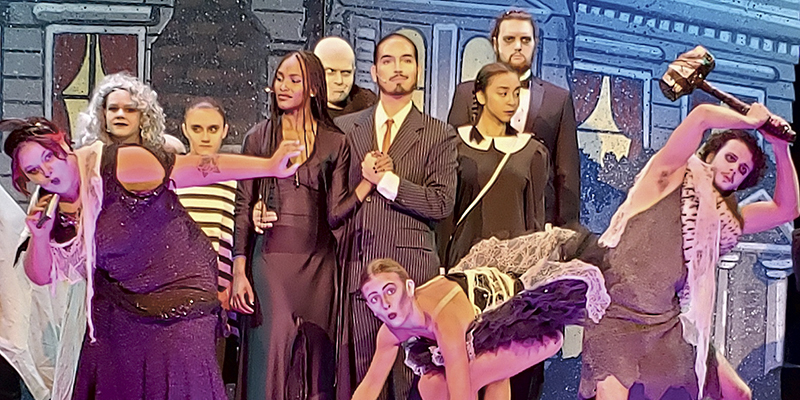 Cedar Summersstock, in the past, have produced “The Addams Family.” Photo provided

The 2022 Cedar Summerstock Theater season has been announced – and show-goers will find four shows that bring to the stage a tantalizing mixture of beehives and blondes, rollicking kids and remembrance.

The season includes “Legally Blonde, the Musical,” “Beehive,” “The Fantasticks” and the kids-packed magical tale, “Matilda.”

All the productions will feature the mainstay of the CST troupe – top-flight fine arts majors from colleges across the U.S. The unique company, the only one of its kind in the Midwest, was created by St. Ansgar native Nancy Lee, who is the artistic director. Several of the shows will also feature local talent, including scores of children in the season closer, “Matilda.”

This year marks the fifth season for the company whose actors stay with host families during the summer. Rehearsals are held at South Square in St. Ansgar, while the shows are presented at the Krapek Family Fine Arts Center at the Cedar River Complex in Osage.

The company, said Lee, continues to envision a destination theater that not only shows off its talented performers, but brings an increasing number of theater-goers to Mitchell County. Audience numbers have grown since its inception as word has spread about the troupe.

The popular “Legally Blonde” will open the season on June 16. Based on the movie, the show follows the journey of Elle Woods to Harvard Law School to try to recapture her former boyfriend.

This season will offer a unique twist of performance for the second and third shows. “Beehive,” and “The Fantasticks,” will be offered repertory style. After each having a week of their own, the two shows during week three and four will switch back and forth every two nights. That will provide an opportunity, Lee said, to have those visiting the county to see not one, but two shows during the Thursday-Sunday production days.

“We are trying it, see how that goes,” she added. “We’re trying to amp up what people can do when they visit.”

“Beehive” celebrates the music of the 1960s girls groups; “The Fantasticks” – the longest running show on Broadway at 42 years of performances — brings its simple message and lyrical score and story to the CST stage.

“Matilda,” based on the popular movie of Roald Dahl’s book, will bring together local and troupe talent for the highly energized story of the young girl whose mystical powers change the lives of those around her.

Returning this year will be another kids’ theater camp. More than expected turned out last year; this year, there may be two camps offered, Lee said.

The company this year is also looking for “guest cooks,” who can sign up to prepare one meal, a few days’ worth, or a week of meals – which also provides cooks a chance to listen to rehearsals during preparation as well as get to know cast, directors and crew members. Host families are also being sought for the new season.

Almost 50 college actors and technical crew have passed under the CST banner since its inception. Two of the alumni are now touring with national companies, while others have found other positions in regional theaters, television and on cruise lines.