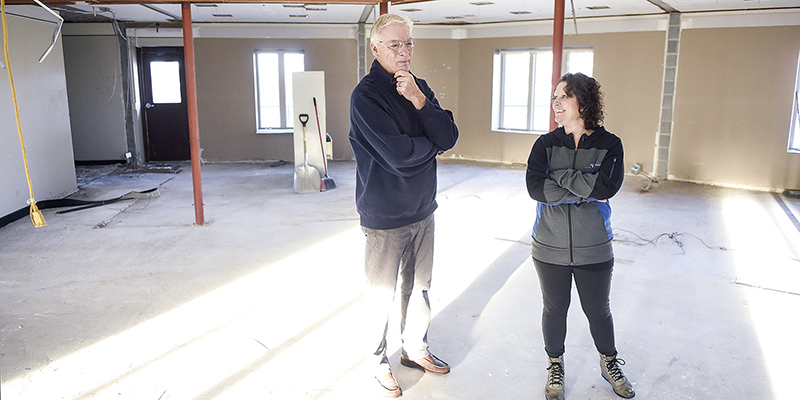 Last week, it was announced that a new childcare business would be opening in Blooming Prairie. On Tuesday, administrators with Leo Augusta Children’s Academy, along with administrators from the Southern Minnesota Initiative Foundation (SMIF) sat down to reveal a little more of what went into creation of this childcare opportunity.

But this was only part of it, as they also announced a $250,000 anonymous donation going toward an initial $3 million fundraising goal.

Rae Jean Hansen and Tim Penny from the Southern Minnesota Initiative Foundation, from left, along with Leo Augusta Children’s Academy’s Amy Hinzmann, Doug Anderson and Sara Winzenburg stand with a donation check for $250,000 to the academy.
Eric Johnson/photodesk@austindailyherald.com

Until Leo Augusta is granted 501c3 exemption as a nonprofit organization, SMIF is shepherding the money donated to the academy, which will be used for construction and organization.

“Two million dollars a year we invest in early childhood,” said President and CEO Tim Penny. “We have a lot of experience.”

Leo Augusta has leaned heavily on SMIF’s resources in the early stages of this project, and they will continue to do so throughout building construction. The academy will renovate the Minimizer site on the north edge of Blooming Prairie.

In the early organization of the academy, Leo Augusta worked with SMIF to figure out what the best fit was for this particular childcare center. The fact remains that not all models fit all communities.

Last year, SMIF worked with 59 communities to find the right fit. In Blooming Prairie, it just so happened that a childcare center of this level, that not only will prepare youngsters for kindergarten, but will also serve as a place kids can go both before and after school, had a home in Blooming Prairie.

That need has been evident in the town’s growth over the past few years. In early November, Blooming Prairie residents voted to approve a two-question referendum that will allow the school district to expand both the high school and elementary schools specifically to accommodate a growing enrollment.

That same growth, driven by younger families moving to Blooming Prairie, makes it possible for center-based academy to succeed. To provide options.

“We’re all fully aware of the need at present,” said Academy Director Doug Anderson. “There are a lot [of people] working to meet that need. It’s a great opportunity for families.”

When the academy is completed in March, prior to the targeted opening of April 1, the academy will be 18,000 square feet situated on three acres of land, and will include a full-sized gym and commercial kitchen area, several classrooms and work areas for teachers.

Outside, fencing was recently erected around land that will be used for outdoor recreation and activities.

“We’re enhancing learning and will provide something many daycares 10 years ago wouldn’t have had,” said Governing Board Secretary Sara Winzenburg. “I feel this is long overdue.”

The effort in fundraising for the academy is centered around a quick payoff of any debt accumulated in the process of establishing Leo Augusta. It’s a goal of the board that the academy can quickly reach a point of being debt free to offer more maneuverability heading into the future.

“We’re getting there. We’re 30% of the way there already,” said President of the Governing Board Amy Hinzmann. “In two years we would like to be free and clear of any debt. The market rates we charge parents will result in market rates we can pay teachers.”

Hinzmann estimates that it takes about a year to get 501c3 status, which from when this all began should place it in the first quarter of next year.

What a lot of this process has shown though, is that there is broad support in Blooming Prairie for this kind childcare.

“Blooming Prairie has some uniqueness about it,” she said. “There’s a lot of passion in this town. It’s driven. If we don’t grow and keep up, what do we have economically? I’m amazed at the broad support of this community. People are very proud to be here.”